Where in health am I? : Home / Health Cloud / StaynHealthy / Eat / Diets / Plant-Based Diet / Plant Based Protein 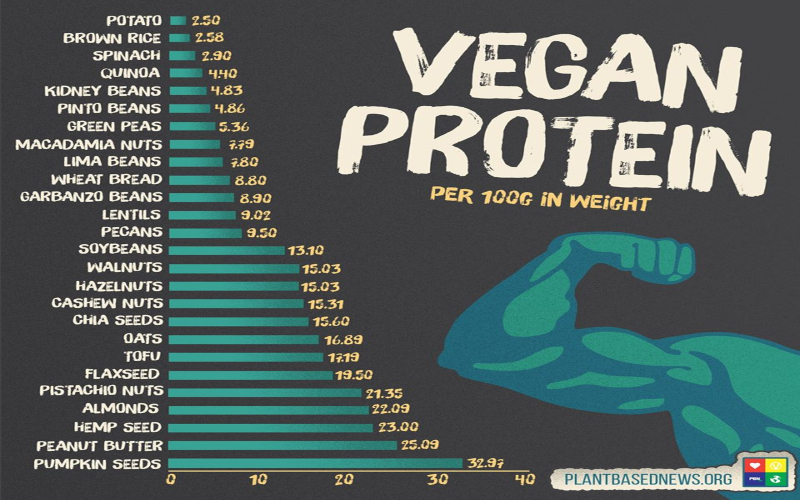 image by: Plant Based News

Conventional wisdom is that “vegan” and “athlete” simply don’t get along — let’s call it irreconcilable differences. I’m here to say that is utter nonsense.

“But where do you get your protein?” Not a day goes by that I am not asked this question. If I had a dollar for every time this came up, everyone in my family would be driving a Tesla.

Most vegans bristle at the question. Armed for battle, they assume a defensive…

Why plant protein is better for you than animal protein

It’d be great if a burger-a-day diet was healthy. Don’t get me wrong—it’s not the worst. You’ve got protein in there and hopefully some veggies on top (and on the side) , and even some fiber from the roll (you used whole grain, right?). Unfortunately, study after study shows that meat as a protein source just isn’t that healthy. It’s far better to get that necessary protein from plants. And yes, that association is a correlation, not a causation.

Nuts Are a Bad Source of Protein

I love getting protein from plant sources as much as I can. I eat two cans of beans after every workout, and I’m the first person to remind people that potatoes and oats have a surprisingly great range of amino acids. I was a vegetarian for five years and can safely say I’ve explored just about every kind of plant protein around, from amaranth to za’atar. During that period, I ravenously consumed every “Top Ten Vegan Proteins” article I could find. Every one of them had nuts. But here's the thing: Nuts—even though they're about 20 percent protein, roughly the same as meat—are a really crappy way to build muscle.

It seems the world is obsessed with protein. People drink protein shakes before their workout. Body builders chow down on chicken, tuna, and eggs in order to get desired results. Plant-based eaters are constantly asked where they get their protein, and nearly every processed health snack references protein value as a reason to buy. It’s no wonder, then, that when one chooses the plant-based lifestyle, protein intake often comes to mind.

How to Get Enough Protein on a Vegetarian or Vegan Diet

If you are new to veganism you may have questions about protein, which can be a problem because vegans tend to get asked about their protein intake on a regular basis and so a lot of people get sick of answering such questions. We realise the issue can be confusing so lets get find some answers!

If you’re eating enough for your activity level and consuming a variety of whole foods, you will get all the protein you need. Guaranteed. No need for supplements!

While meat is a great source of protein, it's just not an option when you're maintaining a vegetarian diet. Ensure you're getting your fill of protein each day by keeping your kitchen stocked with these necessities that offer protein in a flash.

Common vegetables have much more protein than you need, and contrary to popular myth, they're complete proteins as well. The reason you've heard otherwise is that the people spouting protein myths haven't bothered to look up the actual numbers. So let's look at what the science actually says — as well as some choice quotes from doctors and dietitians.

The 8 Best Muscle-Building Foods For Vegans and Vegetarians

You don't have to be a meat-eater to gain muscle and build mass so long as you're eating high-protein food sources.

The best sources of protein for vegetarians

It can be tricky to get your daily quota as a vegetarian if you're not sure what your best veggie sources of protein-rich foods are. Discover our best protein-rich recipes bursting with fresh veggie flavours that are key to a healthy diet.

Tell someone you’re vegetarian, and the first objection you’ll likely get is, “But where do you get your protein?” (Nevermind what kind of shape the person asking is often in.)

Conventional wisdom is that “vegan” and “athlete” simply don’t get along — let’s call it irreconcilable differences. I’m here to say that is utter nonsense.

There are plenty of reasons to eat more meat-free meals: They’re nearly always cheaper, lower in calories, and better for the environment. It’s easy to get enough protein without eating animals, but the doubters often have another concern: Are these meat-free protein sources complete?

Our bodies can also make complete proteins when we eat a variety of higher protein foods, even if those foods aren’t necessarily eaten together (such as rice and beans, a classic example of protein pairings).

When it comes to plant-based proteins (and the most popular myths about them), there’s almost always more to the story than what meets the eye at first glance!

49 vegetarian proteins that are as good as meat

How do you get enough protein if you don’t eat meat? It sounds hard at first but there are plenty of great vegetarian proteins that taste amazing and don't require you to eat a bucket full to get the nutrition you need to stay strong.

"There is often a myth that vegetarians won't get adequate protein," says Vandana Sheth, R.D.N., C.D.E. "Really, it's very easy to meet your protein needs on a vegetarian diet."

One of the most common myths about the vegetarian diet is that after ditching meat it becomes nearly impossible to meet the suggested guidelines for protein intake.