Where in health am I? : Home / Health Cloud / StaynHealthy / Eat / Diets / Tapeworm Diet

Those sorts of weight-loss methods are extremely dangerous, and if you're thinking about them you should look for help - Mike Pearl 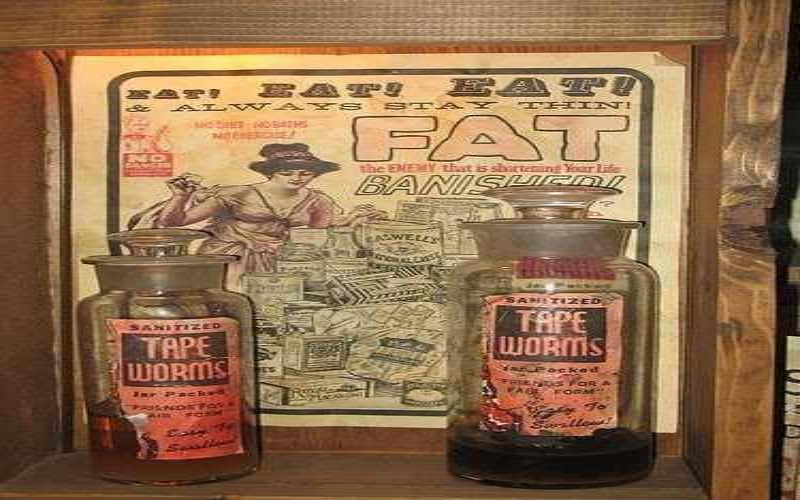 Ahhh, the quest for the perfect weight loss diet—the one that lets you eat and shed pounds...There’s the Paleo diet —eat meat like a cave man! And the Mediterranean diet —eat vegetables like a peasant! And the grapefruit diet —eat like a Florida farmer!

There used to be more daring choices. Like the tapeworm egg diet. That’s right, a program that told you to swallow tapeworm eggs and lose weight.

In the early 20th century, marketers began selling this program to what were then called “fleshy people” under brand names like “Lard-B-Gone.” Sanitized tapeworm eggs delivered what they promised. You got rid of pounds without exercise, dieting, surgery, or dangerous drugs like arsenic pills, which were once a popular means of weight loss because they allegedly cut the appetite. With the tapeworm diet you swallowed the eggs and the tapeworm did all the work—consuming your meal while living in your digestive tract. Meanwhile, the tapeworm produced and shed millions of eggs in your intestine and grew up to 20 feet long.

Maria Callas, the divine and large opera star, reportedly became svelte—losing 80 pounds--thanks to the tapeworm diet. One pasta company claimed her diet trick was “physiologic pasta” (what the heck is that?) — and she sued them. Callas told people her diet trick was salads and chicken, but the tapeworm rumors persisted. Could opera’s “biggest loser” have really used the tapeworm diet? We’ll never know. And we’re not likely to see that technique on reality TV or an infomercial. (For some actually helpful weight loss information click here.)

So, you've probably been wondering: What do you do when you’ve finished losing all the weight you want and it's time to get rid of the tapeworm? The scientific answer . . . is de-worming medications. But there are several other worm-removal urban legends. One involves placing milk, cookies, and a hammer — I think I'll just quote the rest — “near the afflicted person’s anus for a few nights and letting the tapeworm gorge himself into complacency on the treats. Once this has been accomplished, when the worm comes out all the way to demand 'Where’s my cookie?' whoever is stuck with the worm-watching duty that night bashes it with a hammer.”

Who came up with the tapeworm diet? That isn’t clear. Someone probably figured out that people who accidentally ate tapeworm eggs (in undercooked meat) looked pretty thin and thought, “there’s a money-making idea.” If you browse the web for “tapeworm diet,”  you’ll find the method is still in use; the Iowa Department of Public Health sent out an advisory on about it last year.

So, with all the failed diet plans out there, should we head back to the future with tapeworm eggs? I’ll just say, no thanks. And so do public health experts. If you fall for this plan, I’ve got a hammer and some cookies to sell you!

Inside the Lasting Legacy of Tapeworm Diets

What's up with our ongoing cultural fascination with consuming parasites for weight loss?

There are a few different kinds of tapeworms, but it’s the beef tapeworm, or Taenia saginata, that is usually used in these sorts of quick weight-loss schemes...

The Horrifying Legacy of the Victorian Tapeworm Diet

From horrifying foot-binding practices in Imperial China to life-threatening surgeries in modernity, humanity has been finding harmful ways to modify the body since the dawn of civilization. The Victorians were no exception to this.

So, in conclusion, you are a serious dumbass if you consider using a tapeworm for weight loss, and a bigger one if you go through with it.

There are plenty of fad diets circulating the internet these days, ranging from low-carb diet practices, to the (probably) useless gluten-free diets. However, one diet is so dangerous, that the product it uses was banned in the United States by the Food and Drug Administration.

What Happens to You if You Give Yourself a Tapeworm to Lose Weight?

The motivation behind putting a parasite inside you on purpose (a depressingly common scheme) is that it will live inside your digestive tract and gobble up calories from the cheeseburgers and cake you keep eating, but saying a tapeworm will help you lose weight is like saying a knife wound in your throat will ease your sleep apnea—it might have the intended effect, but it's also a terrible, terrible idea.

So, with all the failed diet plans out there, should we head back to the future with tapeworm eggs? I’ll just say, no thanks. And so do public health experts. If you fall for this plan, I’ve got a hammer and some cookies to sell you!

Tape worm diet, sounds insane and disgusting right? Well, after this article you will understand how this diet actually works, the theories behind the results and maybe even consider a tape worm or two of your own. Or not.