Go vegetable heavy. Reverse the psychology of your plate by making meat the side dish and vegetables the main course - Bobby Flay 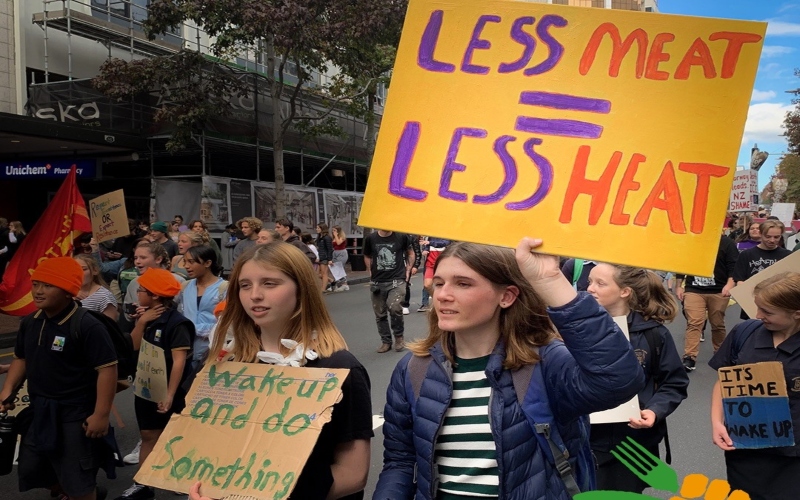 According to Action Against Hunger, “After steadily declining for a decade, world hunger is on the rise, affecting 8.9 percent of people globally. From 2018 to 2019, the number of undernourished people grew by 10 million, and there are nearly 60 million more undernourished people now than in 2014.”

Many of the drivers of this increase are unconnected (at least directly) to any of your daily actions. Warfare, for example, displaces populations, which disrupts food cultivation and distribution in the affected areas.

But if you eat red meat—particularly red meat—you are directly supporting a practice that limits how much food is produced in the world and how accessible it is to poor populations.

Before delving into the hows and whys, let’s clarify our terms. Biologically speaking, food is simply anything that supplies the body with calories, the energy on which the body runs. “Hunger,” says Action Against Hunger, “is the distress associated with lack of food. The [average] threshold for food deprivation, or undernourishment, is fewer than 1,800 calories per day.”

With that, it’s merely a matter of simple math to know what you need to keep a given group of people from undernourishment. For example, putting aside questions of uneven distribution (a subject for an entirely different article), for a town of 1,000, you need to provide a minimum of 1.8 million calories a day to keep the entire town properly nourished.

Of course, food isn’t created out of nothing: it’s the product of the recombination of existing resources, including water, land, and other food. Because all of these resources are finite, the more efficiently we use them, the more food we are able to cultivate. More food equals more calories, and more calories equals more nourishment.

In terms of the ratio between resource usage and the amount of calories in the food that results, the cultivation of red meat is a terribly inefficient practice. How inefficient? According to the World Resources Institute, an international nonprofit organization dedicated to “develop[ing] research-based solutions that create real change on the ground [via a] three-step approach: Count it, Change it, Scale it,” beef cultivation requires roughly five to six times more water and over 20 times more land than is needed by vegetables and grains to provide a similar amount of nutrition, while producing over 20 times the amount of greenhouse gases.

In reporting on a 2018 study that was “the most comprehensive analysis to date of the damage farming does to the planet,” the Guardian puts it another way: “Avoiding meat and dairy products is the single biggest way to reduce your environmental impact on the planet,” noting that livestock “provides just 18% of calories but takes up 83% of farmland.”

Although most animal products are inefficient calorie providers compared to vegetables and grains—fish farming being somewhat of an exception, consuming slightly more resources than vegetable and grain production while requiring no irrigation—beef is far and away the biggest culprit, being roughly five times less efficient than dairy or pork and faring even worse when compared to eggs and poultry.

“A vegan diet is probably the single biggest way to reduce your impact on planet Earth, not just greenhouse gases, but global acidification, eutrophication, land use and water use,” Oxford University’s Joseph Poore told the Guardian. “It is far bigger than cutting down on your flights or buying an electric car. […] Agriculture is a sector that spans all the multitude of environmental problems, [and] animal products that are responsible for so much of this.”

More recent reports present different aspects of the same message. Deutsche Welle, for example, notes that a January 2021 study published in Nature found that red meat “suppl[ies] 1% of the world's calories but account[s] for 25% of the emissions that come with changing how land is used”; and that “[t]o produce the same amount of protein as tofu, beef uses up 75 more times land.” Unfortunately, organic farming is not the answer. Although there are clear benefits to organic farming practices, such farms require a higher land-to-calories ratio than factory farms; and a 2019 study published in Nature Communications noted that in the U.K. a switch to 100% organic would actually result in a net increase in emissions, as the U.K. would be force to increase food import to offset the shortages created the reduced land-to-calorie ratio resulting from the switch.

Want more organic farming, which means healthier, higher quality food, less disease, and less damage to waterways? It comes down to: eat less meat. According to Chatham House’s Tim Benton, an ecologist and co-author of a just-released report of spiking extinction rates, in light of rising world population, changing the way we use land for food cultivation is essential. “If our demand for food continues to increase, the more intensively we have to use the land that is left," he told Deutsche Welle. “[… It] sounds horribly elitist, middle-class—'Let's all go vegan’; but [doing so] could free up demand for land that could then be satisfied by sustainable farms.”

But eating less meat is not the same as going vegan. And there’s more room to eat less meat in the United States than in any country on Earth. We’re #1 when it comes to total meat-eating per person. And while we’re “only” #3 when it comes to per capita beef consumption, we consume four times more total beef than the top two nations (Uruguay and Argentina) combined; and we account for over 20% of the world’s total consumption despite accounting for only 5% of the world population.

Although world population is inexorably on the rise, the world isn’t getting any bigger. And the more land we dedicate to meat production—especially beef—the harder it is to meet that collective caloric need. By doing your part to reduce the demand for beef, you make it easier to feed the world.

What Explains Our Mania for Mushrooms?

The fungus among us may be the future of food, thanks to rich umami flavors that make it a popular substitute for meat. Humans have been gathering various wild fungi since ancient times, but never before have mushrooms been such big business.

Do we all have to go vegan to save the world?

Reducing your meat and dairy intake can help mitigate climate change. Melissa Clark has ideas for how to do it deliciously.

Given how important meat has been to the human story, and how vegetarianism and veganism has done a takeover of your Instagram feed, you might wonder what happens to the human body if you walk away from it completely. Well, wonder no more.

What to Eat More Of If You’re Eating Less Meat

If you are trying to eat less meat, you have plenty of company. Our cultural tide is flowing steadily in that direction. Just look around–there are multiple bestselling books touting the benefits of plant based eating; the Meatless Monday campaign has become mainstream, with awareness and participation climbing rapidly over the past decade; and the word “flexitarian” is now in the Merriam-Webster dictionary ( meaning “one whose normally meatless diet occasionally includes meat or fish.”).

"The evidence is consistent that increased intake of red meat, especially processed red meat, is associated with increased all-cause mortality.”

The report on global land use and agriculture comes amid accelerating deforestation in the Amazon.

The evidence is too weak to justify telling individuals to eat less beef and pork, according to new research. The findings “erode public trust,” critics said.

What to Know Before Resolving to Eat Less Meat

As popular campaigns like ‘Veganuary’ fuel New Year’s pledges to cut back on meat, nutrition studies show conflicting findings about the health benefits.

1,800 Gallons of Water Goes Into One Pound of Meat

Cut down on your water footprint without starving yourself at dinnertime.

The campaign to persuade us to cut back on burgers and bacon has been a bust so far.

There are no health reasons to cut down on eating red or processed meat, according to a new review of the evidence. The claims, which contradict most existing dietary advice, come from a review of existing studies led by the Spanish and Polish Cochrane Centers, part of a global collaboration for assessing medical research. Numerous health bodies have said for decades that we should limit our intake of red meat because it is high in saturated fat, thought to raise cholesterol levels and cause heart attacks. More recently, both red and processed meat have been linked with cancer. In the latest review, though, the authors came to a different conclusion because they considered separately the two main kinds of research.

Debunking What the Health, the buzzy new documentary that wants you to be vegan

The film on Netflix mischaracterizes what we know about food and disease.

In The War On Meat, Count Me In The Resistance

With respect to health, it is true that overconsumption of meat can be harmful to one’s health. But that’s true of all foods — whether it be kale, tofu, or bacon.

New Diet Guidelines to Benefit People and the Planet: More Greens for All, Less Meat for Some

The report suggests a dramatic reduction in red meat consumption for people who eat a lot of it, like Americans and Canadians, but not the world’s poor, who need more animal protein for better health — like children in South Asia.

Red Meat Is Not the Enemy

The secret to curbing meat consumption? The answer is shockingly simple

When one of the biggest meat companies in the world says the future is plants, it’s time to sit up and take notice. U.S. company Tyson Foods has been churning out processed meat and chickens for more than 80 years. But speaking earlier this year, CEO Tom Hayes said growth in plant-based protein could well outpace animal-based products before long. He’s put his money where his mouth is, recently boosting the company’s financial stake in the California-based startup Beyond Meat, which touts a former McDonald’s CEO among its investors.

What Would Happen If an Entire Nation Stopped Eating Meat?

We asked leading experts what the landscape and people of Britain would look like if they became vegetarian en masse.

America is one of the world leaders in per capita meat consumption—which means we’re also one of the most inefficient users of land and other resources when it comes to feeding people.

The transition can be less jarring than you think.

We have delicious plant-based recipes and guides to help you implement Meatless Monday in your school, hospital, workplace, and community.

When The Meatrix launched in November 2003, the viral film broke new ground in online grassroots advocacy, creating a unique vehicle by which to educate, entertain and motivate people to create change. The Meatrix movies, now a series, have been translated into more than 30 languages and are one of the most successful online advocacy campaigns ever — with well over 15 million viewers worldwide.