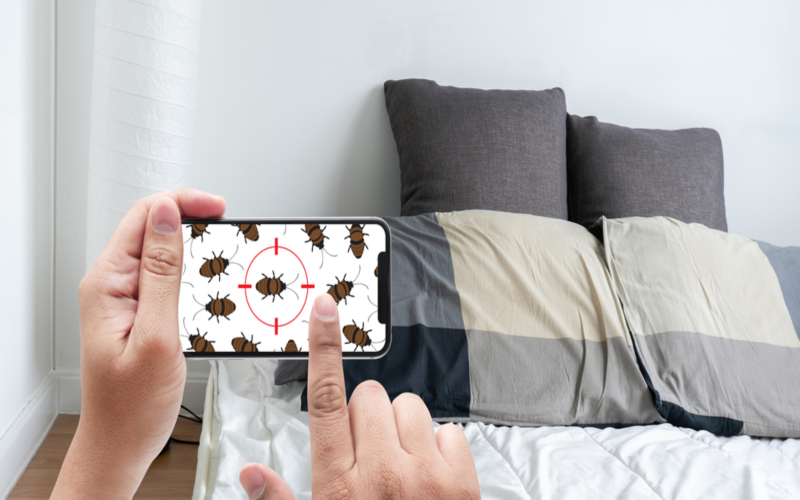 A New Way to Battle Bedbugs: Fake Them Out

Getting rid of bedbugs is notoriously difficult, but sometimes people aren’t even sure if they have the critters in the first place.

Now scientists at Canada’s Simon Fraser University have harnessed the dreaded, hard-to-shake bugs’ own chemical signals to trap them at low cost and no apparent risk to people. Five key chemicals isolated by the researchers falsely signal to the bugs that shelter is at hand, while a sixth, histamine, gets them to stay put.

In experiments in bedbug-infested apartments in Vancouver, traps with about 10 cents worth of the chemicals sucked in hundreds of bedbugs night after night, according to Gerhard Gries, one of the scientists.

Everything you never wanted to know about bed bugs, and more

If some insects could save the world, others do their best to seriously complicate life on Earth. Among them the prize perhaps goes to the bed bug, which after decades of absence has returned to our homes, hotels and public facilities to seriously disturb us. These intrepid little insects aren’t picky about where they set up shop – luxury suites and hospitals, public housing and rich neighbourhoods are all equally attractive to them. Given that bed bugs like to hang out where people congregate in the largest numbers, however, they prefer the city over the country.

Can You Pick a Bedbug Out of a Lineup?

When asked the same question in an online survey of around 2,000 people visiting hotels for business and leisure, only 35 percent of business travelers and 28 percent of leisure travelers were able to identify the bedbug in the same line up. Around the same percentage of people picked “don’t know.”

The Guide to Understanding Bed Bugs

This guide is designed to help you diagnose whether or not you may have bed bugs.

In defence of the bed bug

Bedbugs have a lousy reputation at the best of times, but these unfortunate insects have taken a particularly firm kicking recently. An announcement that their genome had been sequenced was framed not as a remarkable scientific accomplishment but as useful information to help us humans destroy our enemies. It’s not hard to see where the animosity comes from. Though bedbugs – known to scientists as Cimex lectularius – will feed on bats, chickens and domesticated animals, it is their taste for human blood that causes problems. After widespread DDT usage largely wiped them out in the mid-20th century they have made a strong return in recent years, with many becoming resistant to modern pesticides.

The Future Of The Fight Against Bed Bugs

It may be tempting to think that bed bugs could be eliminated, if only we found just the right deadly chemical formula. But uncovering new insecticides is a difficult task as well as an expensive one. According to one estimate, each active ingredient takes around a decade to develop at a cost of up to $256 million. If the chemicals can’t save us, what will? Perhaps there could be another way to go about killing off bed bugs by giving an old technique a new twist.

After years of study (and thousands of bites), researchers may have discovered how to get the bloodsucking pests under control.

Bed Bug Confidential: An Expert Explains How to Defend against the Dreaded Pests

Everything you ever wanted to know about bed bugs but were afraid to ask.

Bed Bug Confidential: An Expert Explains How to Defend against the Dreaded Pests

Everything you ever wanted to know about bed bugs but were afraid to ask.

It was previously thought that Chagas disease, which kills an estimated 50,000 people per year, was exclusively carried by an insect called the kissing bug. But new research shows that bedbugs can also spread the disease, at least among mice.

Bed bugs have a distinct odor, although just what they smell like varies depending on who you ask. Personally, I think they smell like Crayola crayons; others have described them as "new car smell." That scent is part of a complex chemical brew that signals other bed bugs to gather round.

Distinguishing between bed bug bites and chigger bites can be a little tricky; however, there are some clues you can look for to figure out which of the two bit you.

Dust Mite Bites – The allergy that looks like a bite

The dust mite is a microscopic pest that’s difficult to see without magnification. It can’t bite but can contribute to dust allergens and cause severe allergies in humans. On the other hand, a bed bug is tiny but visible. It can bite humans and leave specific markings on the skin.

How Gross Is a Used Hotel Mattress?

Mattresses can harbor dust mites, skin cells, hair, cosmetics, perfume, and bodily fluids. Pads and sheets should catch much of the material, though some particles will be able to bypass these barriers.

How to Search Your Hotel Room for Bed Bugs

YOU'RE PACKED FOR your trip, your boarding passes are downloaded... and then that little moment of terror hits. What if the hotel you're going to stay in has bed bugs? It's a real concern, but by being vigilant, you can reduce your chances of bringing home some unexpected souvenirs.

I dealt with the grossest, most outrageous bed bug infestation you can imagine. But it was after I got rid of them that things really started spiraling out of control.

Teams locate dozens of genes that help pests thrive despite efforts to eradicate them.

How contagious are bedbugs, really?

Why bed bugs have made a horrifying comeback

When the bedbug resurgence happened in the last 15 years, we had all these newspaper articles saying, "Oh my god, they’re in the movie theaters, they're in this place, in that place." But that’s always been the case. You can go back and read descriptions of old beds with jars around the legs that contained paraffin to ward off bedbugs. That’s just an old-school version of these little traps you can buy today to put under your bed. It’s an old story that’s been repeating itself forever.

A New Way to Battle Bedbugs: Fake Them Out

Researchers at a Canadian university have used chemicals the bedbugs make themselves to attract them to a trap.

Today, many people are still ignorant about them. Some people believe they are immune to the problem as long as they keep a clean house. That is not true. People also generally believe they are a problem only for the lower-class. That is not true either. Any home or dwelling can become infested, regardless of how clean or tidy it is, and so that is why people should educate themselves.

Bedbugger.com is a website about bed bugs. You can read the latest news, learn from our extensive Frequently Asked Questions about Bed Bugs, or post a question in our user Forums.

Whether you’re facing a roach, rat, mosquito or even an ant invasion. At the Pest Killers, we are a dedicated team designed to be the informational hub for how to get rid of pests.

Bed bugs are great hitchhikers. They can move from an infested site to a new home by traveling on furniture, bedding, luggage, boxes, and clothing. Although they typically feed on blood every five to ten days, bed bugs can be quite resilient; they are capable of surviving several months to a year without feeding.

Insects in the City

Mostly absent from the U.S. for the past fifty years, bed bugs are making a comeback. Increased international travel and immigration, along with the loss of effective insecticides, has helped this insect spread faster than any other urban insect pest.

Typically, no treatment is required for bedbug bites. If itching is severe, steroid creams or oral antihistamines may be used for symptom relief.

Bedbugs bite you and feed on your blood. You may have no reaction to the bites, or you may have small marks or itching. Severe allergic reactions are rare. Bedbugs don't transmit or spread diseases. Adult bedbugs are brown, 1/4 to 3/8 inch long, and have a flat, oval-shaped body. Young bedbugs (called nymphs) are smaller and lighter in color. Bedbugs hide in a variety of places around the bed. They might also hide in the seams of chairs and couches, between cushions, and in the folds of curtains. They come out to feed about every five to ten days. But they can survive over a year without feeding.