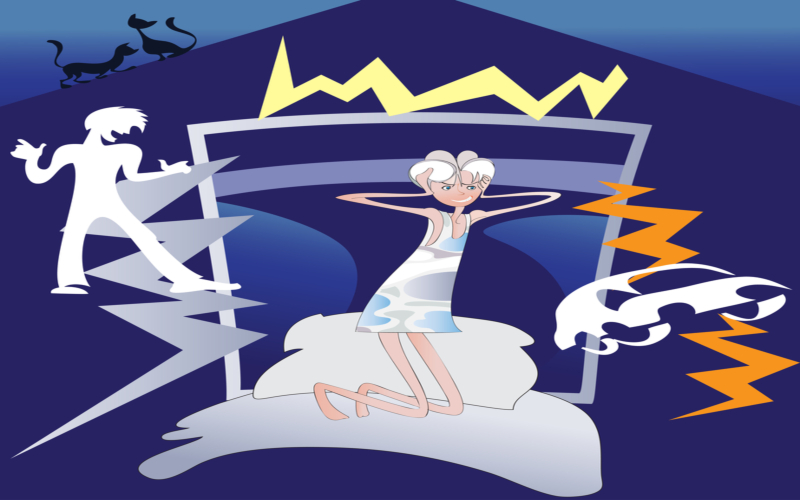 Noise pollution is a lot worse for you than you may have thought. According to the World Health Organization, it's the second biggest environmental cause of health problems in humans after air pollution. Studies from 2012 suggested it contributed to 910,000 additional cases of hypertension across Europe every year and 10,000 premature deaths related to coronary heart diseases or strokes. Closer to home, a 15-year study found that there was a higher rate of cardiovascular and stroke-related deaths among those living near to the rabble of Heathrow—something residents are sure to cite in the wake of ministers approving a third runway there.

So why isn't anyone talking about it?…

Is Noise Pollution the Next Big Public-Health Crisis?

Research shows that loud sound can have a significant impact on human health, as well as doing devastating damage to ecosystems.

These scientists think peace and quiet should be a human right

Noise pollution is terrible for your health, but they want to find a solution.

Ask most people about pollution, and they will think of rubbish, plastic, oil, smog, and chemicals. After some thought, most folks might also suggest noise pollution. We’re all familiar with noise around us, and we know it can become a problem – especially if you live near an airport, train station, highway, construction site, or DIY-enthusiast neighbour. But most people don’t think that noise is a problem under water. If you’ve read Jules Verne’s Twenty Thousand Leagues Under the Sea you might imagine that, maelstroms excepted, life is pretty quiet in the ocean. Far from it.

There are thousands of parks, refuges and wilderness areas in the U.S. that are kept in something close to their natural state. But one form of pollution isn't respecting those boundaries: man-made noise.

Can Ultrasonic Noise Make You Sick?

Ultrasonic signals from sensors and other devices are all around us, and the health effects of their interactions aren’t clear.

Could Noise Pollution Be Making Us Sick And Angry?

Noise-wise, India is one of the most polluted countries in the world. The data on sound pollution is scarce, but whatever little exists for India shows that in most cities the noise reaches dangerous levels.

Drones are our noisy future: People find their buzzing more annoying than cars or trucks

Why so much hate? One reason the researchers suggested: People are used to the sounds of cars and likely rely on them to get around, so they are more willing to accept their noise. We’ve become numb to the auto, even as noise pollution worsens as cities grow. Regulators might need to consider regulations not just about where drones can fly but when, lest your late-night pizza craving disturb your neighbors. The results also mean that retailers like Amazon and others will likely face opposition to the noise the new delivery technology creates, if even they are indeed “’no louder than’ conventional package delivery solutions,” the researchers said.

Dying for some quiet: The truth about noise pollution Read more: https://www.newscientist.com/article/mg19526186-500-dying-for-some-quiet-the-truth-about-noise-pollution/#ixzz6YHfsDRbH

However, alarming new evidence from the World Health Organization (WHO) suggests that thousands more people around the world may be dying prematurely or succumbing to disease through the more insidious effects of chronic noise exposure. …

How Do You Tell a Whole City to Shush?

Noise as an urban plague should be addressed in broader terms that allow for quality-of-life improvements for people living in noise-riddled areas, rather than those that can hop into a quiet spot to recharge.

How noise pollution is ruining our hearing

Damage from loud sounds is cumulative — but really loud noise can hurt your hearing in a matter of minutes.

A new technique for measuring our neuronal response to sound is yielding both good news and bad news.

How to benefit from reduced noise pollution in your home

Our world today is filled with noise. From the sounds of constantly flowing traffic, the blaring of electronics, TVs and entertainment systems to the omnipresent passive and active communication in the form advertisements, phone calls and the background noise from other human beings, the volume in our lives is only getting louder.

SLAMMING doors, banging walls, bellowing strangers and whistling neighbors were the bane of the philosopher Arthur Schopenhauer’s existence. But it was only in later middle age, after he had moved with his beloved poodle to the commercial hub of Frankfurt, that his sense of being tortured by loud, often superfluous blasts of sound ripened into a philosophical diatribe. Then, around 1850, Schopenhauer pronounced noise to be the supreme archenemy of any serious thinker.

New York Times Essay Tells Everyone to Be Quiet

George Prochnik had a beautifully written essay in the New York Times on Sunday about why noise might be the “supreme archenemy” of thought. It is full of scientific evidence suggesting that hearing, an evolutionary “early warning system,” takes over our brains in ways we don’t always understand. For instance, we’re wired to attend to harsh sounds—even in sleep.

Noise Pollution Hard On Heart As Well As Ears

According to a recent study, noise pollution could be costing lives. A World Health Organization report finds Western Europeans lose years to death or disability from excessive sound. Though European countries have taken steps to turn the volume down, the U.S. backed off the effort decades ago.

A new study explores the unequal burden of noise on communities across the US.

Quiet, Please! How To Cut Noise Pollution At Home

But let’s say you don’t fit into this new-build category, or your landlord has somehow managed to escape city ordinances. There are two main ways to create more quiet at home: 1. adding surfaces that absorb the sound, or reverberation, before it gets to your ears, and 2. blocking it entirely.

That Ear-Splitting Leaf Blower? It Also Emits More Pollution Than a Car

The blowers and related devices are dirty because many use two-stroke engines.

The Future Will Be Quiet

While countries in Europe have enforced stringent national noise standards, Americans have for the most part just made more noise; last year, more than 340,000 noise complaints were filed in New York City alone. But there are signs that people in the U.S. are getting serious about the problem, and new technologies can help.

The Millennial Generation: Wired for Sound and At Risk for Hearing Loss

This is what the hospital of the future sounds like

Hospitals have always been noisy places. In 1859, Florence Nightingale wrote a section devoted to noise and its hazard to patients in her Notes on Nursing. But in the US the noise problem has been getting worse and worse. “Oftentimes we assume it’s the sound of alarms, which is actually the sound that really got me interested in this noise issue as a whole,” says Sen. “But repeatedly the answer we got [from patients] was the voice of somebody who is suffering in pain. Lots of patients expressed that across the hallway they can hear others in pain moaning, screaming.”

Ultrasonic Waves Are Everywhere. Can You Hear Them?

There are horrible sounds all around us only a small group of people can hear. They almost always come from machines — sometimes intentionally, and sometimes by accident. They're loud enough to be annoying and cause headaches in people sensitive to them, though it seems they aren't usually loud enough to cause permanent health issues. And scientists have no firm idea of how common these sounds are or how much damage, if any, they're doing to society.

Whales hate sonar, explosions, and other human-made noise. Do they like our music, at least?

What Did You Say?! How Noise Pollution Is Harming You

The U.S. Environmental Protection Agency (EPA) defines “noise” as “unwanted or disturbing sound.” Since we can’t see noise, we are often oblivious to its effects on us, even if the noise is “wanted.” But the major side-effects of noise pollution are serious and sometimes surprising. The three most shocking facts I discovered are...

When even soft noises feel like a knife to the eardrums

Researchers have known for years about a condition called hyperacusis, where ordinary sounds seem uncomfortably loud. But they’re just starting to understand that some patients experience a more severe form, where noise is not just heard — but is actually felt, as physical pain.

Why the fight against noise pollution in the ocean matters

Michael Jasny explains how the NRDC and other conservation groups have worked to limit the use of airguns in deep ocean excavations.

Why We Need to Reduce Noise Levels in Cities

The hustle and bustle of cities are part of the appeal, but too much noise is unhealthy. Planners can help control the problem of noise in the city.

Noise pollution is a lot worse for you than you may have thought.

9 ways that sound affects our health, wellbeing and productivity

Julian Treasure cares very deeply for your ears. That’s why he’s given TED talks like “The 4 ways sound affects us” and “Why architects need to use their ears.” Treasure is on a mission to make policymakers, engineers, architects and, well, Julian Treasure: Shh! Sound health in 8 steps Julian Treasure: Shh! Sound health in 8 steps everyone think more about what they hear around them — because the way things sound have a tangible, measurable effect on how we feel, how we heal, how we work and how we live.

Since 1968, Wild Sanctuary has traveled the globe to record, archive, research, and express the voice of the natural world - its soundscape. These increasingly rare sounds of the wild inform and enrich our specialized efforts from the field to public performance.

Hearing Education and Awareness for Rockers' mission is the prevention of hearing loss and tinnitus among musicians and music fans (especially teens) through education awareness and grassroots outreach advocacy.

Here you may find information on all aspects of Otoacoustic Emissions (OAEs) from Hearing Science to clinical applications. The information provided is completely FREE and NO membership is required to access any sections of the Portal.

The Right to Quiet Society

We do not seek to create an absolutely quiet world. However, we do want to see a world where quiet is a normal part of life and where it is possible to listen to the sounds of nature without the constant intrusion of machine noise and artificial stimuli.