Imagine all the people living life in peace. You may say I'm a dreamer, but I'm not the only one. I hope someday you'll join us, and the world will be as one - John Lennon 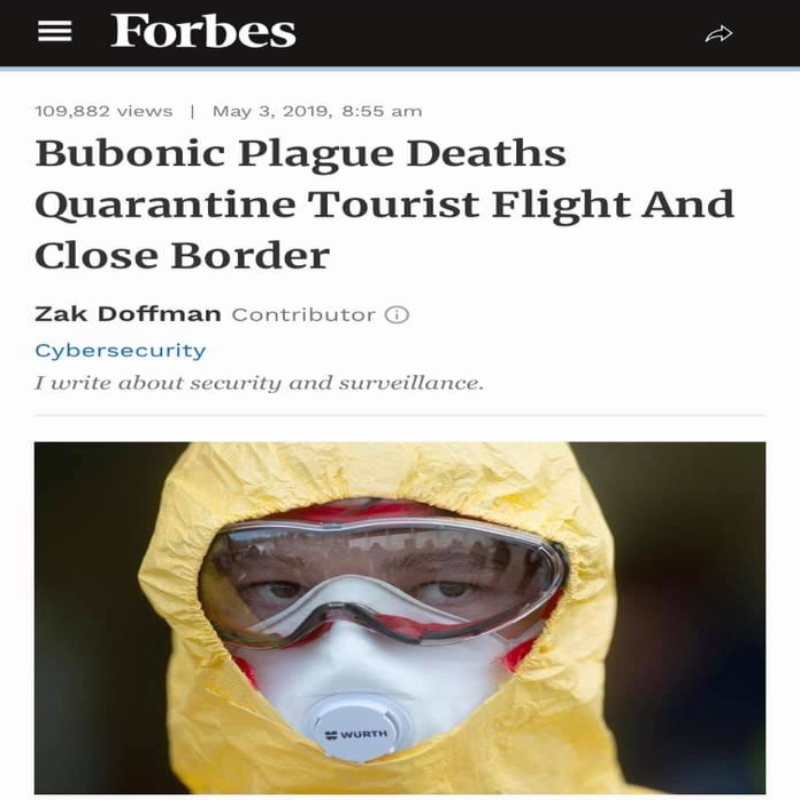 Foreign Policy recently reported that an ISIS laptop computer captured in Syria includes instructions on how to weaponize bubonic plague. Yes, the plague. The plague that caused the Black Death pandemic that killed roughly 25 million Europeans in the 14th century.

But is a plague weapon even possible? How crazy is it to think that plague could be found and turned into a usable weapon? Here's a rundown:

The plague is still hanging around

You don't have to go to a medieval graveyard to find the bacteria that causes plague: Yersinia pestis.

The bacteria is still around because plague never really went away, although its burden…

Shedding New Light on Plague to Protect Against Bioterrorism

Roger D. Pechous, PhD, studies the bacteria that caused the infamous black death of the Middle Ages, shedding light on something old to potentially protect against something new: bioterrorism. The University of Arkansas for Medical Sciences (UAMS) researcher’s latest work has been published in Infection and Immunity.

Why Officials In Oregon Are Practicing For A Plague Outbreak

On April 30, 1665, Samuel Pepys recorded his first diary entry about the Great Plague of London: "Great fears of the sickness here in the city, it being said that two or three hourses are already shut up. God preserve us all." 354 years later, to the day, officials in Portland, Oregon, are practicing for a plague outbreak. From April 30 to May 2, emergency responders and public health agencies are rehearsing their response to a simulated bioterrorism attack unleashing Yersinia pestis on the port city of 650,000. The three-day drill is part of how those agencies ensure that they're prepared to contain an outbreak if (or when) it happens -- which is part of how we keep modern cities from turning in London, circa 1665.

Bioterrorism - Plague As A Biological Weapon

Many hours, instead, even days, could pass silently before stating the devastating effects of an attack of biological nature. CDC declares that the plague is a possible biological weapon because the bacterium occurs in nature and could be isolated and grown in quantity in a laboratory.

Deadly plague could potentially be released as a cloud above a city, killing thousands, according to bioterrorism experts

The infection affects a handful of people in the US every year and between a few hundred and a few thousand annually around the world. Most people survive a plague infection these days, since it can almost always be treated with antibiotics. But researchers, bioweapons experts, and governments still worry that the plague could be turned into a deadly bioweapon, especially if someone with terroristic intent were to find or engineer a strain that couldn't be treated with common drugs.

Frontline investigates the ever-increasing threat of biological weapons in today's world, focusing on the rise and fall of the Soviet Union's enormous covert bio-weapons program which went undetected for almost two decades.

Plague: from natural disease to bioterrorism

Plague is also recognized as a potential agent of bioterrorism. It has been used, or considered for use, as a biologic weapon on several occasions. It is important for the medical community to be familiar with the epidemiology, diagnosis, and symptoms of plague so it can deliver an appropriate and calm response should the unthinkable happen.

Researchers in Britain Have Determined The Genetic Sequence of Bubonic Plague

Acknowledging the fears about bioterrorism, the scientists believe the benefits of making the information public "greatly outweigh the risk of someone getting it and using it for nefarious purposes," said Rick Titball, of the British Defense Ministry's Porton Down laboratory.

Foreign Policy recently reported that an ISIS laptop computer captured in Syria includes instructions on how to weaponize bubonic plague. Yes, the plague. The plague that caused the Black Death pandemic that killed roughly 25 million Europeans in the 14th century. But is a plague weapon even possible? How crazy is it to think that plague could be found and turned into a usable weapon? Here's a rundown...

In primary pneumonic plague, as with bubonic plague, organisms often enter the bloodstream and cause multiorgan involvement, DIC, and shock. In the absence of early antibiotic therapy (ie, within the first 24 hours), death occurs from overwhelming sepsis (usually within several days after illness onset). Without therapy, mortality approaches 100%.

Plague is currently considered to be one of the most serious bioterrorism threats. Y. pestis was developed as an aerosol weapon by several countries in the past. Aerosol dissemination of bacteria would cause primary pneumonic plague in the exposed population, an otherwise uncommon, highly lethal, and contagious form of plague.