Where in health am I? : Home / Health Cloud / StaynHealthy / Immunologic Health

If we think of the immune system as a machine, then we are far from even knowing all of its parts - Bruce Beutler 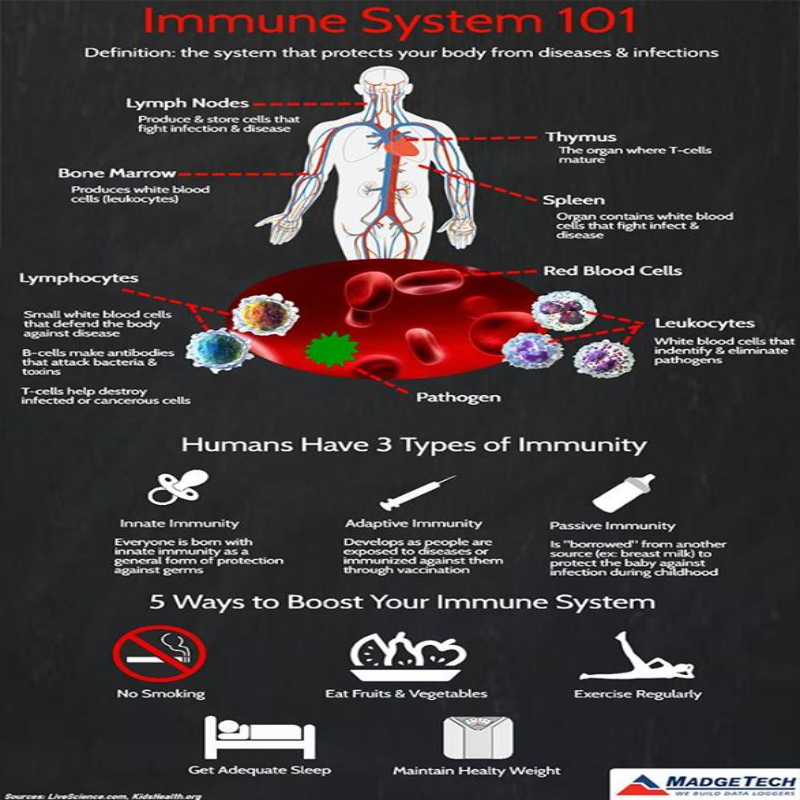 Your Body is a Teeming Battleground

I went to medical school, at least in part, to get to know death and perhaps to make my peace with it. So did many of my doctor friends, as I would find out. One day—usually when you’re young, though sometimes later—the thought hits you: You really are going to die. That moment is shocking, frightening, terrible. You try to pretend it hasn’t happened (it’s only a thought, after all), and you go about your business, worrying about this or that, until the day you put your hand to your neck—in the shower, say—and … What is that? Those hard lumps that you know, at first touch, should not be there? But there they are, and they mean death. Your death, and you can’t pretend anymore.

Show Your Immune System Some Love

Antibodies are great and all, but macrophages, B cells, and helper T cells deserve some attention too.

How to Get the Best From Your Immune System

Journalism has given me many surprises over the years. Few compete with this sentence: Do not boost your immune system. C’mon, really? What would cause me to urge you to ignore all the accepted wisdom and powerful marketing aimed at having you boost your immunity? Because the actual science tells a very different story. The immune system is much less about exercising power than it is about finding balance. You can help train and maintain it. Here’s how.

Thankfully, we’ve got a defense against these microbial freeloaders: our immune systems. Dozens (or even hundreds, depending on which immunologists you ask) of types of cells patrol our bodies to look out for trouble, flagging and dismantling threatening pathogens while ignoring benign visitors (like our friendly, neighborhood microbiomes).

Just because it’s good for you doesn’t mean more is better.

The Defenders: Three Books on the Science of Immunity

The body has a complex system to block invaders. Scientists have learned how to join the fight.

Evolution might have played a trick on women’s immune systems.

As an immunologist, it strikes me that many of our recurring analogies for a healthy, functioning immune system promote excellent behaviour traits. In this regard, we should all aim to be a little more like the cells of our immune system and emulate these characteristics in our lives and workplaces. Here are five life lessons from your immune system.

How Can We Unleash the Immune System?

Although immunotherapy can work wonders for cancer, it does not help everyone, side effects can be fierce, and costs are high. But the field is young.

How Measles Hacks the Body—and Harms Its Victims for Years

The virus is the most contagious in the world, exploiting the human body's immune system to spread with extreme agility and harming its victims for years.

Your Environment Is Cleaner. Your Immune System Has Never Been So Unprepared

A century ago, British scientists suggested a link between increased hygiene and allergic conditions — the first hint that our immune systems are becoming improperly “trained.”

Something to Sneeze At

Natural remedies that claim to “boost your immune system” don’t work, and it’s a good thing they don’t.

Are There Health Benefits To Exposing Our Immune Systems To Bacteria?

Because bacteria have always been present in the environment of our ancestors, we’ve evolved to expect a certain amount of pull from the bacteria on the other side of the rope, and our immune systems are programmed to begin tugging right away.

Can A 3-Day Fast Reset Your Immune System?

Does a 3-day fast truly reset your immune system? Well, maybe not a total reset, but at least a mild refresh. The science suggests that, if you can do it, a prolonged fast for 2-3 days or longer may induce your body to clean out some old immune cells and switch on production of new ones. Stay tuned.

Exactly What Happens to Your Body When You Catch the Flu

Most symptoms are actually caused by your immune system's response to the virus.

The immune system changes during pregnancy too. These changes contribute to the success of the pregnancy, and are generally thought to be caused by the many hormonal changes that occur while women are with child.

Researchers have found a new mechanism that could explain the link between social dysfunction and immune dysfunction.

Is it possible to boost your immune system?

Every question you’ve ever wanted to know about how not to get sick, answered.

New research shows the virus can have devastating effects on the immune system that persist much longer than the illness itself.

The immune system is a critical function in the body that manages our health. It is a complex system with hundreds of different cell types. Until now, no metric had existed to quantify an individual's immune status. This ground-breaking new data, while requiring further development, describes a parameter (called IMM-AGE) by which we may understand a person's situation of their immune system, providing increased information for accurate prediction and management of risks for disease and death.

Shots Go On a Health Kick

Wellness shots tout good-for-you ingredients. But you have to get past the taste first.

The Immune System's First Responders Are Smarter Than We Thought

New research shows that the immune system’s first responders are much more specialized and work better together than once thought. The findings could lead to the development of new antibiotics, and may also help explain why some people are more susceptible to particular types of infections.

This Is How Living in a City Affects Your Immune System

What doesn’t kill us makes us stronger, or so the saying goes. If you believe that, you might assume that living in a city packed with people, pests, and the countless microorganisms they lug around would strengthen a person’s immune function. But is that true? The short answer: Maybe. It’s complicated.

What is sepsis and how can it be treated?

Researchers have now switched their efforts to identifying the molecular mechanisms that lead to the immune-paralysis phase of sepsis. Understanding this better will hopefully lead to the development of new immunotherapies to target the second phase of the condition.

The secret to living past 110 may be an increase in killer cells in the bloodstream.

The three scientists who won this year's Nobel Prize in Physiology or Medicine worked with grasshoppers, fruit flies, mice and human cells to open important windows on how all these creatures defend themselves against microbial invaders and refrain from attacking their own cells – except when they don't.

Your Body is a Teeming Battleground

It’s time to rethink the quest to control aging, death, and disease—and the fear of mortality that fuels it.

11 Surprising Facts About the Immune System

The human immune system is our protector — its job is to defend the body against diseases and other damaging foreign bodies. The system works by first identifying alien bacteria, viruses, fungi and parasites lurking in the body, and then sends in its troops — white blood cells — to destroy the invaders and the tissues they infect. Here are 11 surprising facts about the immune system.