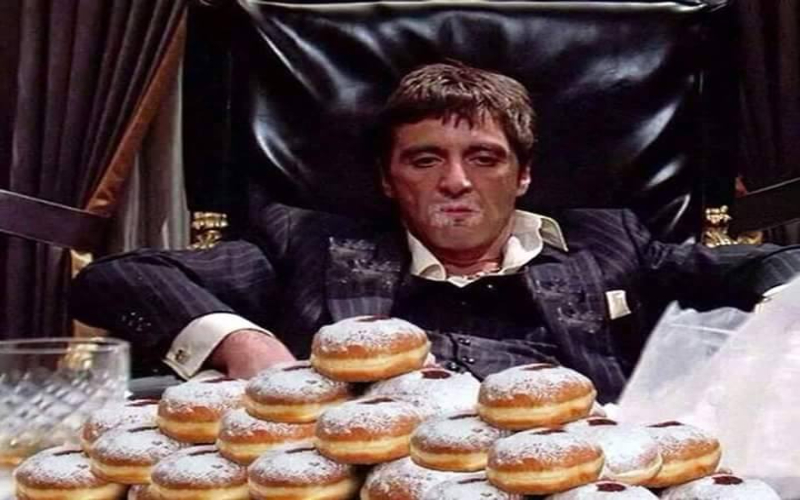 After a tough or emotional day, I will sometimes go home and eat ______ until I’m sick.

How people answer this question is at the crux of an emerging debate about obesity and food addiction. Is food addiction real, and should food industries be held accountable for engineering hyper-palatable sugar-salt-fat bombs that override feelings of fullness? Or is it more accurate to describe overeating as an eating addiction — a disordered relationship to all foods that can and should be brought to heel by the individual?

“Sitting in the room with clients, you never hear people say, ‘Oh my god, I came home after a hard day and I was just craving broccoli and cauliflower so bad that I had a massive binge on these vegetables,’” said Ashley Gearhardt, Ph.D. to the Huffington Post. “That’s part of the reason I think it’s important to recognize that not all food is problematic — it’s a certain class of foods that people seem to struggle with the most.”

Gearhardt is a clinical psychologist, a psychology professor at the University of Michigan, and the creator of the Yale Food Addiction Scale, a questionnaire that assesses how addicted someone is to food. Her Food Addiction Scale is now five years old, and has been deployed in dozens of studies that demonstrate an estimated five to 10 percent of the general population may have some degree of food addiction. The rates are even higher in obese study participants, and actual food addiction diagnoses (based on her scale) are most frequent in people who also binge eat, she writes in a recently published study retrospective about food addiction.

Gearhardt compared the struggles of people with food addiction to alcoholics trying (and failing) to keep their habit under control.

“Often they will try to have their own rules, like, ‘I’m going to try to not drink until after 5,’ or, ‘I’m going to try to drink water between each drink,’ “ said Gearhardt. “But when they start drinking, the intensity of the alcohol makes it really hard; something similar might be happening with food.”

Food addiction research is still in its infancy, but its appeal is obvious. The model paints a comprehensive picture of the “toxic food environment” we live in today and is a compelling way to link the rising processed food industry with growing rates of obesity — especially morbid obesity, which is a body mass index over 40.

But John Menzies, Ph.D., a University of Edinburgh researcher who studies the neuroscience of hyper-palatable foods argues that there’s not enough evidence to show that certain foods are an addictive substance like alcohol or cigarettes. Instead, in a review of almost all the studies on this subject recently published in the journal Neuroscience & Biobehavioral Reviews, he writes that it’s more appropriate to think about chronic overeating in terms of an eating addiction.

“’Food addiction’ has been implicated as a potential contributor to the obesity epidemic,” wrote Menzies in an email to HuffPost. “However, there is no association between diagnoses of addictive-like eating and body weight.”

In other words, some normal-weight people seem to have signs of a so-called food addiction, while some obese people may have normal, healthy relationships with food. Its those relationships, said Menzies, that should be the focus of analysis and intervention, if necessary — not the food itself.

“‘Eating addiction’ shifts the focus away from the food itself to the behaviour,” he wrote. “It emphasises that we need to look carefully at people’s relationship with food and understand how people make their food choices.”

Menzies’ biggest objection to the term “food addiction” is that it confuses drug-like, chemical addiction with “rewarding properties.” For instance, he argues, there’s an evolutionary reason our brains light up when we eat high-sugar, high-fat foods. Back when we were cave dwellers, we didn’t know where our next meal was coming from, so it made sense to scarf up as much as we could. Now that we live in a land full of supermarkets, vending machines and takeout delivery, that evolutionary drive to eat as much nutrient-dense food as possible backfires on us.

Chemical addiction from, say, drug abuse, is a different brain story. The National Institute on Drug Abuse defines it as a “chronic, relapsing brain disease” because longterm drug abuse can permanently change a brain’s wiring and how it works. Currently, Menzies argues, there’s just not enough evidence to show that certain nutrients or foods does the same thing. And besides, he continues, there are many possible causes for obesity (genetic predisposition, hormone deficiencies, thyroid issues) that could be mistaken for an addiction if overeating were to be classified as one. Menzies’ solution for overeating? Eat less.

“It can be argued that access to a diversity of foods, especially a diverse range of palatable foods, may be a pre-requisite for the development of addictive-like eating behavior,” he writes in his study. “Therefore, one possible approach to overcome this behavior would be to restrict access to only a small number of such foods.” But Gearhardt vigorously disagrees.

“Humans have been eating food since we’ve been in existence, but we haven’t seen this boom in eating-related problems, binge eating and obesity until very recently,” she said. “The thing that’s parallel to this big burst of problems on the scene is foods that have been developed that are unnaturally high in fat, salt, sugar, and are particularly rewarding.”

The flip side of an emphasis on individual self-control is the diminished role the food industry plays in this possible explanation for obesity. While Menzies acknowledges the industry’s power — in terms of stocking shelves and determining the food choices of most people — he still argues that the people have greater power still over their environment. And for governments who have tried to take on a more proactive role on the issue with sugar taxes and the like, those efforts haven’t proven successful so far.

“Ultimately we decide ourselves what to eat (or parents do if we’re young kids),” writes Menzies. “Governments and other policy makers have limited powers… For example, the Danish sugar tax law was repealed after a fairly short time.”

New York Times reporter Michael Moss literally wrote the book on Sugar Salt Fat. In a series of illuminating and, at times, jaw-dropping descriptions, Moss details the lengths to which processed food companies will find the perfect combination of sugar, salt fat that makes their food irresistible and crave-able.

“The food industry hates the A word, addictive, because it cuts too close to their efforts to maximize the allure of their products,” Moss wrote in an email to HuffPost. Yet even he is reluctant to use the “a-word” when it comes to describing the effect processed food has on our brains.

“I’ve been shy about using the word myself when it comes to food, since narcotics can have such a tougher grip on individuals,” wrote Moss in an email to HuffPost. “But obesity and diabetes is a vastly greater health issue than drug abuse, involving vastly greater numbers of people, and it’s important to remember that the formulas used by the processed food industry to get us to not just like their products, but to want more and more of them, are just part of their strategy.”

Currently, binge eating as listed in the latest edition of the Diagnostic and Statistical Manual of Mental Disorders, or DSM, is the closest condition to Gearhardt’s description of a food addiction. Binge eating is simply defined as repeated episodes of “eating significantly more food in a short period of time than most people would eat under similar circumstances,” and people who have the disorder might feel guilty, embarrassed, disgusted with themselves or feel like they lack control. But Gearhardt “definitely” sees a future in which food addiction could be categorized as a substance addiction, not just an eating disorder.

“The research on this is just beginning, so it’s too premature to say one way or another,” concluded Gearhardt. “But the vast amount of interest this field is getting, the preliminary research that finds differential brain responses and the eating behaviors for foods that are highly processed suggests that there is definitely a future in this, and we need to keep evaluating it so that our understanding of how our food environment is potentially negatively impacting us as a society — especially children.”

Source: Anna Almendrala, Food Addiction vs. Eating Addiction: Why A Single Word Makes All The Difference, The Blog, HuffPost, September 23, 2014.

The notion that food can be addictive has been debated for some time and largely rejected by both nutrition and addiction researchers. But this spring, the secretary of health, Kathleen Sebelius, said that for some, obesity is “an addiction like smoking.”

Food Addiction Is Real and We Need To Talk About It

Only by calling food addiction by its proper name can we begin to speak frankly about how to help one another recover. Until then, food addicts like me will continue to struggle to control that which cannot be controlled.

As the obesity crisis continues to spread around the world, nutrition scientists keep looking for answers why millions of people eat more than they should. One possible explanation, some have suggested, is food addiction, an inability to stop eating, even when it makes us sick.

Quiz: Are You Addicted to Food?

Are you a food addict? Several studies now suggest that food and drug addictions have much in common, particularly in the way that both disrupt the parts of the brain involved in pleasure and self-control. While the scientific community continues to debate whether food addiction is real, researchers at Yale have devised a Food Addiction Scale to determine if a person shows signs of addictive behavior toward food.

Sugar is addictive. And we don’t mean addictive in that way that people talk about delicious foods. We mean addictive, literally, in the same way as drugs. And the food industry is doing everything it can to keep us hooked.

When can you call a food addictive?

Why Oreos Are As Addictive As Cocaine To Your Brain

“Our research supports the theory that high-fat/high-sugar foods stimulate the brain in the same way that drugs do,” Schroeder said. “It may explain why some people can’t resist these foods despite the fact that they know they are bad for them.”

Why Your Brain Makes It So Hard To Stop Eating

If you’re a compulsive eater or are living with a different kind of addiction, there are certainly treatments that can work in the present, though they may be a little (or a lot) tougher than having your brain zapped.

Food Addiction vs. Eating Addiction: Why A Single Word Makes All The Difference

Is food addiction real, and should food industries be held accountable for engineering hyper-palatable sugar-salt-fat bombs that override feelings of fullness? Or is it more accurate to describe overeating as an eating addiction — a disordered relationship to all foods that can and should be brought to heel by the individual?

By far the most common challenge for keeping up a healthy diet is giving up food addictions. If you could break free from your cravings, healthy habits would take over and your new lifestyle would become a breeze. Wouldn't that be nice?

Food Addicts in Recovery Anonymous is an international fellowship of people who have experienced difficulties in life as a result of our relationship to food and eating.