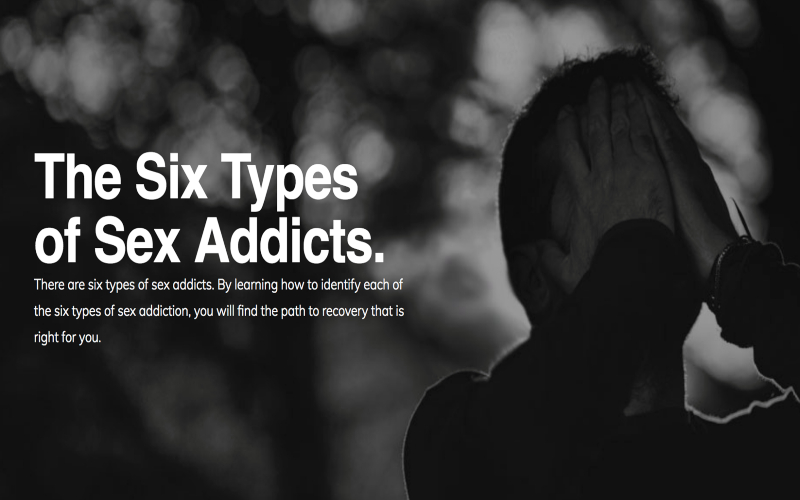 Although sex addiction is the name, researchers and clinicians still debate about what exactly constitutes the game. A few years ago, there was an effort to add a brand new diagnosis of “Hypersexual Disorder” to the list of official psychiatric diagnoses, but ultimately the attempt was rejected. Left without a legitimate diagnosis, those suffering do their best to get help for a problem without a name or consistent description.

Whatever you call it, it’s a real thing. And sex addiction is more than just spending too much time at the mall and calling yourself a shopaholic, or eating too much Godiva and calling yourself a chocoholic. Indeed, there’s research to suggest that sex addiction is not unlike drug addiction. A study out of none other than the University of Cambridge found the same engagement of several brain areas—all involved in reward and motivation—in people with compulsive sexual behavior as previously found in people struggling with drug addiction.

But sex addiction is particularly hard to talk about (agh, double entendre alert!) because it quickly gets into the realm of moralizing. Is the behavior really a problem? Or just a problem to judgmental prudes? Here’s how to tell if your sex life is ruining your actual life.

Feature #1. It gets in the way. A high number of sexual partners isn’t inherently pathological—instead, the problem lies in something called congruence. If having many partners adds to your life or spending a lot of time or money on sex is in line with who you are, there’s no issue—life and sex are congruent.

But if sex and the pursuit thereof takes away from your life, like taking up lots of time or causing a preoccupation with sex that leads you to neglect relationships, friends, family, work, or school, then we have incongruence, which equals a problem.

Feature #2: It feels out of your control. You have unrelenting urges that require immediate gratification, but what’s more, you act upon the urges without thinking about consequences. In an early interview study, many sexually compulsive individuals described a numb, detached, or trance-like state where an overpowering drive seems to take over. One interviewee simply said “I click out.”

But sadly, there are consequences. Despite trying to stop, your sexual behavior gets you into trouble again and again, risking your health, your long-term partnerships, your job, and your self-respect.

Feature #4: Dependence. Just like in drug or alcohol use problems, there may be tolerance and withdrawal. Over time, increasingly frequent or more extreme sex might be needed to achieve the same emotional comfort as before, just as an individual struggling with drug addiction needs increased doses to achieve the same high.

Feature #5: Conflation. Sex gets mixed up with things that should probably stay separate. For instance, happiness and self-worth become tied to sex, or negative feelings like loneliness, fear, sadness, or guilt become sexualized. Indeed, an early study of self-described sex addicts found a tendency to experience increased sexual interest when depressed or anxious, leading the researchers to theorize that those with out-of-control sex lives might turn to others for sex when they actually need connection or validation.

Feature #6: Empty or dysfunctional relationships. Sex addiction is unique from other addictions like drugs or alcohol in that it requires another person (unless you’re going solo, but taken to an extreme, that’s not the greatest setup either). Regardless, using a person to satisfy an addiction doesn’t typically set one up for a healthy relationship. For instance, individuals with sex addiction might make obtaining sex the main goal in interacting with others.

Of course, all six of these features leave us wondering if sex addiction is the chicken or the egg. Is sex addiction a sign of more complex, underlying issues? Or does the sex addiction itself cause problems? It’s unclear: some studies have found a link to depression or anxiety, but others find no overlap at all.

What is clear is that, like other addictive behaviors from drug and alcohol use to gambling, sexual addiction can make a life spin out of control. Thankfully, there are many options for help. David Duchovny and Russell Brand both made headlines with their admission to treatment facilities, but 12-step programs and traditional therapies are more popular (and accessible) choices. With treatment, you’ll learn that you’re not defective or broken and it's not just beer goggles and lack of self-control. Most of all, you'll find that hope and change is possible.

Before Lockdown, I Was Managing My Sex Addiction. Now I’m Spiraling Out of Control

My moral code demands no sexual expression outside of marriage. How do I deal with these unwanted desires?

Mental health experts and former "addicts" believe that the term is outmoded and inaccurate. Others say it helped them change their lives.

Sex addiction isn’t an officially labeled mental-health disorder but psychotherapists and others have plenty of suggestions for treatment.

Does Sex Addiction Function Like Drug Addiction In The Brain?

But the authors of the new study report that the same areas of the brain involved in drug addiction are activated when “sex addicts” watch sexually...

Fight continues over whether sex addiction is a real thing

If your sex life gets you into trouble, does that make you a sex addict – or just someone who has made some bad choices? The debate over sex addiction has taken a new twist, as guidelines are being drawn up that may recognise sexual compulsivity as a mental disorder.

Science Says Sex Addiction Is For Real. Here's How To Diagnose It.

Lack of research and knowledge about female hypersexuality stem from the double standard that men always want sex and women never do. Some women instead refer to their condition as "love addiction" or "relationship addiction."

Sex Addiction: A Disease Or An Excuse?

Sex addiction, nymphomania or sexual compulsion might sound like the stuff of novels or over-hyped celebrity angst. Yet excessive sexual behaviors have been documented for over two centuries in American medical literature.

There is considerable debate in the medical community about whether sex addiction is a distinct condition. The conversation is complex, and deserves space to be explored through clinical findings and psychiatric thought; when depicted as a reflection of criminal behavior, discussions of sex addiction will inevitably be reductive.

Indeed, there’s research to suggest that sex addiction is not unlike drug addiction. A study out of none other than the University of Cambridge found the same engagement of several brain areas—all involved in reward and motivation—in people with compulsive sexual behavior as previously found in people struggling with drug addiction.

Sex addiction and intimacy disorders are real issues. So is treatment that can change your life. You're not alone.

The basic principles of recovery practiced by SAA are found in the Twelve Steps and Twelve Traditions of Alcoholics Anonymous. Although we are not affiliated with AA or with any other organization or agency, we are, indeed, grateful for permission to modify and apply the Steps and Traditions to sex addiction, making recovery possible for us.

Those struggling with sex addiction want solutions. Our 3 and 5 day intensive focuses on solutions. Some highlights of this intensive will be, discovering the origination of your sexual addiction, address core issues of sexual addiction, outline a definitive plan for your recovery and help you create long term strategies for your successful recovery.