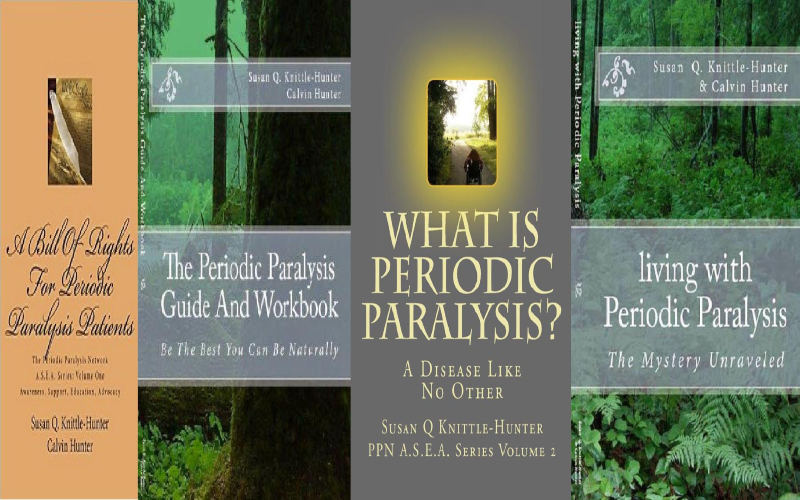 Although it took me 62 years to get a diagnosis, statistics indicate it takes approximately 20 years for someone to get a diagnosis for Periodic Paralysis. This is inexcusable and is due to several factors. First, everything else must be ruled out and secondly, because it looks “fake” to doctors. One of the physicians, who originally diagnosed me, told me that of the few patients he has had with Periodic Paralysis, they were all diagnosed with “conversion disorder” before they got their diagnosis. I myself received this diagnosis, as did most of the 125 members of my Periodic Paralysis Network Support and Education Group.

This did not happen 100 or 50 years ago, but in the past few months. One young woman went into full body paralysis lasting many frightening hours. She came out of it to discover she was in such a weakened state that she could not walk or even do something as simple as get dressed without becoming totally fatigued and she was in total body pain. Doctors evaluated her and sent her to a psychiatrist. She was diagnosed with conversion disorder and prescribed a well-known drug used to treat depressive disorders and a well-known pain reliever. She spent the next few months unable to walk and in excruciating pain and in and out of paralytic attacks each lasting many hours. She was unable to work or take care of her young children.

Upon learning of Periodic Paralysis (PP), after much research, her husband discovered the effects of the drugs on someone with PP. He found out that both medications had elements that can actually trigger the paralytic episodes. Immediately she began to taper off of them. Within weeks, pain began to ease; she was able to stand and walk a few steps with help and became somewhat functional again. After a few more weeks she was walking with the aid of two canes and able to do simple tasks. She did not have any episodes of paralysis for two months. Though she does not have a diagnosis and probably will not get one for some time to come, her psychiatrist now regrets his diagnosis and prescribing the drugs. He has been referred for more tests to possibly diagnose Periodic Paralysis.

Another patient, an older man, has suffered with paralytic episodes for years. Gradual muscle weakness ensued until this person had to give up a teaching career. Testing ruled everything else out and a muscle biopsy revealed damage to muscle fibers consistent with PP. Despite these findings, after being forced to see a psychiatrist, the man was diagnosed with conversion disorder while in the hospital because of almost constant paralytic episodes.

This is just the tip of the iceberg for individuals with Periodic Paralysis. They have unexplained bouts with partial to total body paralysis, which include frightening heart arrhythmia; choking; fluctuating blood pressure and heart rate. While in this state they are unable to communicate, they are given IVs with medications/drugs/compounds, which make it worse. They are able to hear everything going on as the doctors insist they are faking it, insisting they are having pseudo seizures, pinching them or sticking them with needles to make them respond, demeaning and insulting them and their family members. Conversion disorder is written in the charts and comments like, “refused to lift leg when asked” was written rather than the truth, which was “cannot lift his leg when asked.” Some people actually die during these horrific ER or hospital stays and the death certificate may contain any number of false causes.

According to the DSM-IV-TR (2000) six criteria exist for diagnosing conversion disorder:

Brown also suggests, "Another feature thought to be important was that symptoms would tend to be more severe on the non-dominant (usually left) side; there were a variety of theories such as the relative involvement of cerebral hemispheres in emotional processing, or more simply just that it was "easier" to live with a functional deficit on the non-dominant side. However, a literature review of 121 studies established that this was not true, with publication bias the most likely explanation for this commonly held view.[15] Although agitation is often assumed to be a positive sign of conversion disorder, release of epinephrine is a well-demonstrated cause of paralysis from hypokalemic periodic paralysis."

In conversion disorder it is believed that the patient is unaware that he or she is causing the symptoms and he or she is very frightened. The symptoms come on suddenly and usually get worse. The main symptom is called pseudoparalysis.

“In pseudoparalysis, the patient loses the use of half of his/her body or of a single limb. The weakness does not follow anatomical patterns and is often inconsistent upon repeat examination”.

These differences are key, but problematic. Stress, good or bad, can be a trigger for an episode of paralysis, so an examining doctor may ask and discover there has been some stress in the recent past of the individual. The second issue is that most episodes of paralysis are full body, but some may be only have partial paralysis and only ½ of the body or only one limb is affected. There is not a person alive who would not be very frightened to become suddenly paralyzed and end up in the ER in need of medical attention. The episode may be inconsistent if the patient is given an IV or medication. This may cause new symptoms. Upon examination in an hour or two, either they are coming out of it or worse with different symptoms. This may all happen if someone has Periodic Paralysis.

One further thing that needs to be noted; the statement about epinephrine is very concerning. If a medical professional knows that epinephrine can cause a paralytic episode in someone with Hypokalemic Periodic Paralysis or Andersen-Tawil Syndrome, he or she may take it upon them self to use it on the patient to trigger an episode. This can kill someone with PP so should never be done. Seeing it in writing in a study can lead an inexperienced doctor without all if the facts to try it. Provoking an episode to prove or disprove someone has conversion order is absolutely not to be done. One of our young members died last year in this exact manner.

In all of my research, each article I found on the subject of conversion disorder listed Periodic Paralysis or one of its forms as a differential diagnosis; a condition that looks like or mimics it.

It makes me wonder if, in fact, individuals who actually had some form of Periodic Paralysis have been mistaken for conversion disorder and were the actual models for it. By that I mean, did people who were in actual full body paralysis due to PP or those who were in partial paralysis become the first individuals seen as having pseudoparalysis and that pseudoparalysis, really does not exist?

So, as far as I am concerned, when an individual arrives in the emergency room in paralysis with no known cause, it should first be assumed that he or she has a form of Periodic Paralysis and he or she should be treated as such. Never should he or she be considered faking, adding more stress which, then leads to more paralysis. A protocol for treating Periodic Paralysis should then be followed.

“Can you help me?” The 52-year-old father called out to his son, who was asleep in the other bedroom. It was nearly midnight, and the man, awakened from sleep, tried to get up to go to the bathroom. When he stood, he was surprised to find that his legs had no strength, and he fell.

The other day in the ER I diagnosed Hypokalemic Periodic Paralysis in a patient for the first time. Really, it was an accident. I ordered lab work on this particular individual hoping it would give me some insight into this usually healthy patient's symptoms.

A genetic defect causing my potassium to be “sucked into” my muscles and out of my blood stream quickly, sends my heart racing. The defect in muscle ion channels leaves my muscles stiff, swollen and unable to move. Although not much can be done to prevent further attacks including taking potassium supplements daily (but I still take them) and there is no cure for my disease at this time...

There are no known cures, but there are treatments/drugs for some forms (Hypokalemic Periodic Paralysis and Hyperkalemic Periodic Paralysis) which can be and are successful for some individuals. The type I have, however, has no traditional medications, which can alleviate the symptoms, but by avoiding the triggers and by using some natural methods, the number of paralytic episodes can be reduced and the severity of the episodes can be lessened.

These strange paralytic conditions have been described for nearly a century. Patients can often learn to prevent attacks by avoiding strenuous exercise, which can cause swings in potassium levels, and eating foods that are either high or low in potassium.

What Is Periodic Paralysis?

Although it took me 62 years to get a diagnosis, statistics indicate it takes approximately 20 years for someone to get a diagnosis for Periodic Paralysis. This is inexcusable and is due to several factors. First, everything else must be ruled out and secondly, because it looks “fake” to doctors. One of the physicians, who originally diagnosed me, told me that of the few patients he has had with Periodic Paralysis, they were all diagnosed with “conversion disorder” before they got their diagnosis. I myself received this diagnosis, as did most of the 125 members of my Periodic Paralysis Network Support and Education Group.

The purpose of this blog is to collate all the key information regarding Hypokalemic Periodic Paralys, its symptoms, side effects and treatment.

Living with Periodic Paralysis: The Blog

This blog is designed to educate the world about Periodic Paralysis a rare, inherited, hard to diagnose, debilitating and cruel metabolic disorder. I have a variant of this condition and my life is filled with constant challenges as I attempt to manage my symptoms to stay alive.

We are mission-driven, independent and not-for-profit. Our website reflects our mission to make medically accurate, up-to-date information about the periodic paralyses accessible to patients, caretakers and physicians

The Periodic Paralysis Network, Inc., also known as PPNI was founded in 201l. It is an on-line organization with a multifaceted forum designed to provide hope through support, education and advocacy to individuals with all forms of Periodic Paralysis and their family members and to educate all medical professionals on how to recognize, diagnose and properly treat their patients in a timely manner, using all natural and drug-free methods.