Where in health am I? : Home / Health Cloud / StaynHealthy / Nutrition / Minerals / Chromium picolinate

Chromium is not the fat-loss miracle that TV shows and Internet ads tout it to be. Stick to your diet, increase the intensity of your exercise, and you’ll get better results than any fat-loss pill could deliver - Dr. Mike Roussell 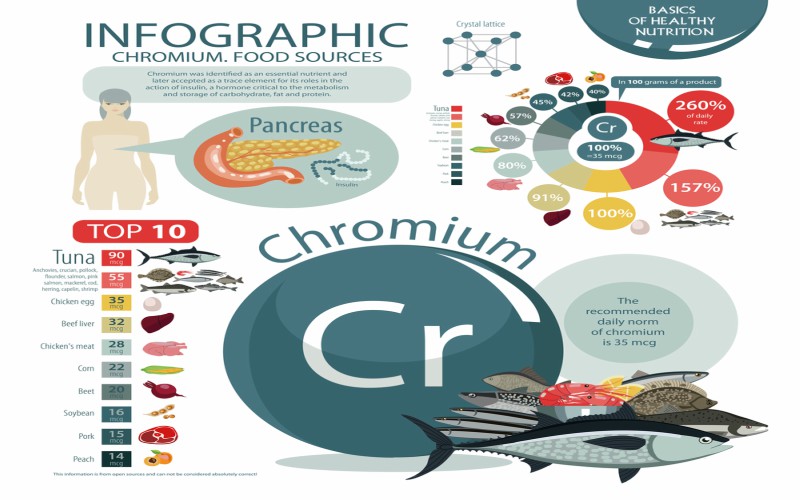 You can buy plenty of chromium supplements down at the vitamin store – chromium picolinate has been a big item for many years now. That’s because the element has been suspected as an essential trace constituent of the human diet, particularly for carbohydrate metabolism.

Doubts have surface over the years, though. It’s actually quite hard to show that something is essential to the human diet, not least because (1) the experiments to prove this definitively would not be ethical to run and (2) even if you wanted to run them, getting ahold of enough food that’s absolutely free of Trace Nutrient X is no small task. The existing trace elements and vitamins were discovered under conditions…

What Is Chromium Beneficial For? Blood Sugar, High Cholesterol & More

The benefits of taking chromium supplements is still somewhat controversial and questioned by some medical experts, since studies to date show mixed results.

One of the most grave nutritional problems is unrecognized chromium deficiencies, states biochemist Richard Passwater, Ph.d., based on many geriatric studies revealing that body stores of chromium in individuals eating refined diets decrease dramatically with age.

If you are interested in using chromium picolinate for health reasons then that’s fine, but in terms of altering body composition I would not recommend it.

Unfortunately, the recommended dietary intake of chromium hasn't yet been determined due to insufficient research.

Chromium is certainly not the critical nutrient for health that people once thought. However, the jury is still out about what precise role it does have.

Chromium is not the fat-loss miracle that TV shows and Internet ads tout it to be. Stick to your diet, increase the intensity of your exercise, and you’ll get better results than any fat-loss pill could deliver.

CHROMIUM PICOLINATE is the hottest dietary supplement on the market. The Federal Trade Commission says that at least nine million consumers spend $100 million a year on various forms of it. And no wonder. If half the claims made for it were true, it would probably be as important a discovery as aspirin or penicillin. Or sliced bread. But for now, the commission contends that none of the claims made for chromium picolinate have been substantiated; one claim, the commission says, is in fact false.

The Sound, the Fury and the Facts on Chromium

The argument over chromium picolinate is indicative of the heated political and scientific debates that surround not just chromium, but the unregulated sale of all manner of nutrient supplements that can now be sold over the counter in varying doses, sometimes large enough to cause harm.

An awful lot of chromium picolinate has been sold over the years, and the stuff is still moving off the shelves. It’s starting to look like the best we can hope for, though, is that people were able to merely waste their time and money and harmlessly excrete all that chromium.

Chromium is a micronutrient meaning we don't need a lot to meet our AI (Adequate Intake) and any inadequate intake of chromium can be resolved with a healthy eating plan.

Chromium is a mineral that humans require in trace amounts, although its mechanisms of action in the body and the amounts needed for optimal health are not well defined.