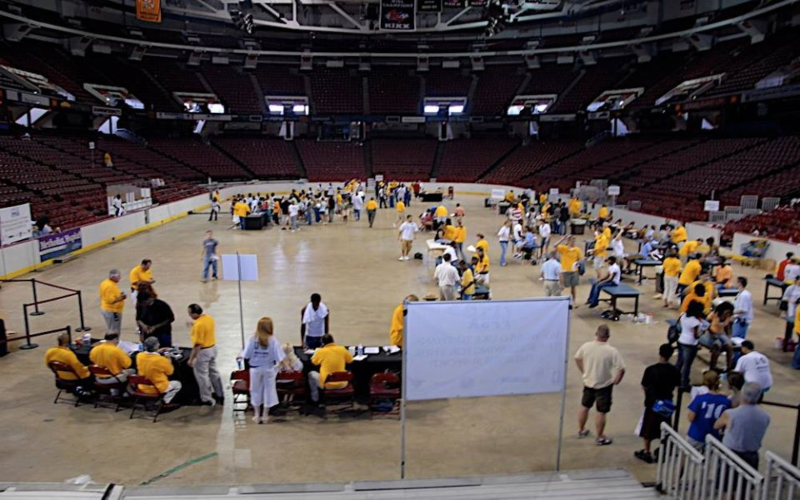 Two years ago, around 9 at night, my 18-year-old son came home after studying for a test. Luckily I was there to greet him. We talked briefly about the full moon, and then he gasped and collapsed. His heart had stopped. Another son heard my screaming and got my wife to call 911. Another started CPR. Then early responders, ambulance, intensive-care unit, induced coma, feeding tube, batteries of tests, neurologists, physical therapists, a defibrillator installed. Twenty days later he walked out of the hospital. The total bill was over $1 million, nearly all paid by insurance.

We were fortunate. According to the American Heart Association, the fatality rate from sudden cardiac arrest…

Will the genetic screening of athletes change sport as we know it?

The debate over whether genetic testing of athletes actually works has been around for some time, especially regarding recruitment and selection programs. Many are worried its use to determine sporting potential will pose a significant challenge to the spirit of the Olympics and similar contests.

In the endeavours to optimize effects of sports participation and training, unfortunate side-effects should be minimized. Indeed, the devastating impact of Cardiac Arrest (CA) or Sudden Death (SD) in athletes has shocked societies and sports spectators all over the world. Preventive measures, specifically pre-participation screening have been advocated by the European Society of Cardiology (ESC) and have subsequently been implemented in some sporting communities. The EACPR Sports Cardiology section answers below our key questions on pre-participation screening.

Can Cardiac Screenings Save the Lives of Young Athletes?

An EKG exam could help detect heart disease in young athletes. Or it could send parents down a costly road of expensive follow-up exams that lead nowhere.

Those are legitimate concerns, but Dr. Hainline’s original proposal was the right one: We should begin targeted screening of some groups of college athletes — starting with those in sports that recent research indicates pose a high cardiovascular risk, such as basketball and soccer. The N.C.A.A. is currently developing guidelines for managing sudden cardiac arrest in its athletes. Expected to be released later this year, the guidelines are likely to endorse a standardized questionnaire on medical and family history, more training in CPR and increased access to automatic defibrillators. However, they will almost surely not include EKG screening.

Debate over whether EKGs should become standard for teenagers before playing sports.

Should Young Athletes Be Screened for Heart Risk?

Should high school athletes be screened for heart trouble before taking to the practice field? Once thought to be exceedingly rare, sudden cardiac death is far more prevalent among young athletes than previously believed, recent research has shown.

Sudden Cardiac Death in Young Athletes - Is It Stoppable?

The sudden death of any young athlete is tragic and often comes as a shock not only to the individual’s immediate family and friends, but also to the affected community.

Sudden Cardiac Death: To Screen, Or Not To Screen?

The Dark Side of EKG Screening in Athletes

"As you know, we've been looking into EKG's in athletes because we have suspected for some time that an EKG will help us better detect students who might be at risk for sudden cardiac death while participating in sports. You know, even if we can prevent one death in these young people, it would be worth it. None of us want a young person to die.

When a news source as powerful as The NY Times publishes an article about sudden cardiac death in young people, one expects accurate information. It’s far too important a topic to write about imprecisely. This piece, entitled Should Young Athletes Be Screened for Heart Risk, included numerous inaccuracies and failed to tell important facts about the complexities of widespread screening of athletes. It was a really bad post.

Early testing can avert disaster, but false positives are stressful and costly. Now there’s a solution.

Athletes Look For Doping Edge, Despite Tests And Risks

A positive test for performance-enhancing drugs can ruin athletes' careers. And prolonged use of steroids, for instance, can cause lasting damage. So why do many athletes still take the risk?

Screen Across America is a consortium of organizations that provide heart screenings to students. We believe that this should be a standard of care because thousands of children die every year from sudden cardiac arrest. It is the #1 cause of death of student athletes. As organizations, we operate independently of each other. We are nonprofits and for profits. Some of us charge for heart screenings while others offer it free of charge. Our screening protocols may differ slightly. Many of us have adopted the Seattle Criteria - a set of guidelines made by international experts in the field of sports cardiology.