Where in health am I? : Home / Health Cloud / StaynHealthy / Skin Health / Albinism 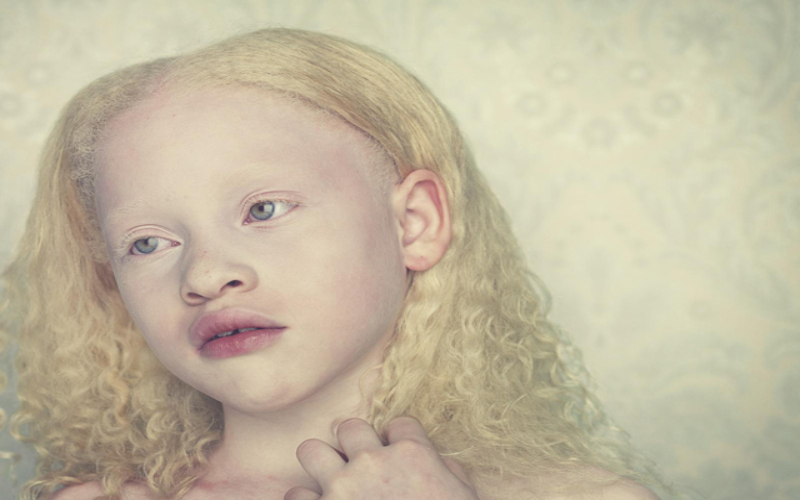 My daughter Lyra was born on May 11th 2006. She had white, almost clear hair at birth. Even though our older two kids were born with dark hair, we weren’t terribly shocked since I had a brother and a niece who were both born with white hair. Albinism was suspected immediately by the doctors, but it wasn’t until 2 days after birth when she was examined by the Pediatric Ophthalmologist, that the diagnosis was confirmed. Lyra had Oculocutaneous Albinism...

After a week or two of denial along with a serious case of postpartum depression, I finally accepted it… I had a sweet, beautiful, platinum blonde baby girl who couldn’t have been more perfect.

“There is a beauty in difference, and I hope through my work to inspire people to embrace this difference and reinterpret their ideals of beauty.”

Most students have no idea how tough university life can be if you have albinism. Awareness Day gives us the chance to tell our story and shift attitudes.

In Tanzania, according to reporting from the Thomson Reuters Foundation, albino body parts are highly valued in witchcraft and can fetch a high price: “Superstition leads many to believe albino children are ghosts who bring bad luck.

Each Of Us Is A Treasure’: Edward Snowden Writes To A Malawi Girl Living With Albinism

It is shameful that people are being persecuted for being different,” Snowden, who tells Alfred about his exile entering its fourth year, writes in the letter. “Your differences are not weaknesses, they are strengths.”

From the words of an albino, a brilliant blend of color

Who knows where his academic career would have taken him had he survived—but as it is, he left behind an account of sensory experience that remains as relevant now, over 200 years later, as it was when it was first conceived. And isn’t it somehow poetic that the first known scientific account of such brilliant color comes to us from someone who was an albino?

I discovered very quickly that most people were clueless as to the facts about albinism. They think of the stereotype “Albino” that they see on TV.

Rick began a process of discovery – about albinism, about people with genetic differences and about himself. What he found was startling and upsetting. The images that he saw were sad and dehumanizing. In medical textbooks children with a difference were seen as a disease, a diagnosis first, not as people. So Rick turned his world upside down – he stopped working in the fashion industry and created a not-for-profit organization that he named Positive Exposure.

Parent of a Child with Albinism

I discovered very quickly that most people were clueless as to the facts about albinism. They think of the stereotype “Albino” that they see on TV.

The Salif Keita Global Foundation is a non-profit organization founded by Malian musician and singer, Salif Keita. The US-based non-profit tax-exempt 501(c) 3 organization brings media attention to the global plight of people with albinism, has advocacy for their rights and social integration, and raises funds to provide them with free healthcare and educational services in the US, Africa and around the world.

We are an advocacy organisation that empowers persons with albinism and educates the society about albinism in Nigeria and the world.

The Will to See

The boys were both diagnosed with Ocular Albinism, a condition that impacts their visual acuity. Will’s vision is much more affected than Jack’s.

Bringing together albinism associations from around the world.

National Organization for Albinism and Hypopigmentation

NOAH’s mission is to act as a conduit for accurate and authoritative information about all aspects of living with albinism and to provide a place where people with albinism and their families, in the United States and Canada, can find acceptance, support and fellowship.