Where in health am I? : Home / Health Cloud / StaynHealthy / Skin Health / Psoriasis

You may think I'm being rude/I'm just embarrassed to be nude/Psoriasis has taken its toll on me/It's come and gone, too many times before - Jon Lovitz 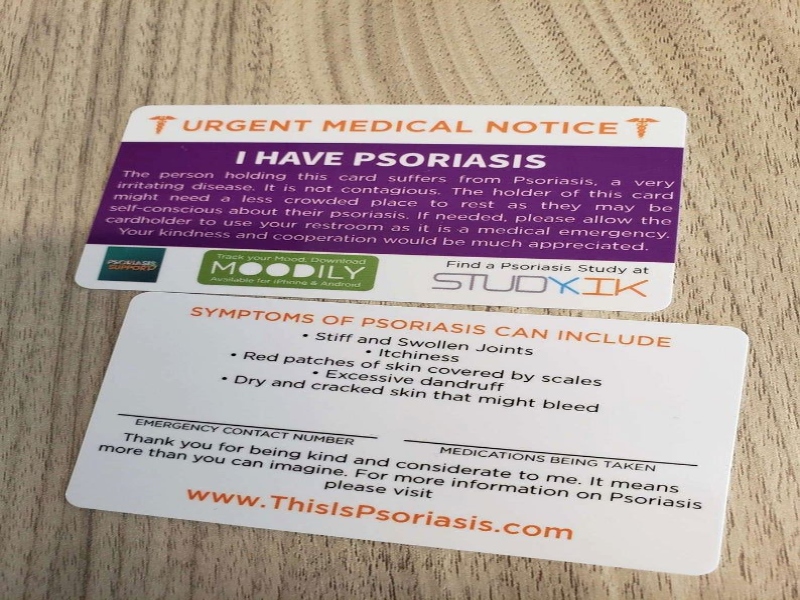 image by: Let's Face it: Psoriasis

I write about my health because…

I write about my health because…I don’t want anyone living with psoriasis to think they’re alone. I’m a part of a community that supports one another through words of wisdom, advice, friendship and care.  Everyone has very unique experiences conquering their skin condition, and other health concerns, but those experiences shared can have a positive impact on someone looking for guidance.

It’s really inspiring to see how much encouragement and love the psoriasis community has for one another. We all understand the physical and mental anguish that can be brought on by a flare up and the frustrations of trying to figure out why.

When I was diagnosed, I stayed…

A deeper look at psoriasis

There are ways to shorten flare-ups and, in some people, prevent them from recurring.

Why Doctors Think a Kim Kardashian Selfie Is Important

Kardashian has been occasionally candid about dealing with the chronic skin condition psoriasis in the past, mentioning it on her various reality shows and even posting on Instagram about the trendy detox routines she was trying in order to calm the incurable inflammatory illness.

Over the past decade, wholesale prices for self-administered psoriasis medicines rose substantially, underscoring the ongoing financial burden for many patients, according to a new analysis.

Although psoriasis has been a well-recognized skin condition for many years, there has been significant progress over the last decade.

The scaly, itchy skin of psoriasis can be embarrassing and even painful. What is it like to live with psoriasis and psoriatic arthritis? Have newer treatments made psoriasis more manageable? Five men, women and children speak about living with this disorder.

Psoriasis is a disease that causes cells to rapidly build up on the surface of one’s skin, leading to the formation of thick, silvery scales and itchy, dry, painful red patches that can colonize a sufferer’s entire body — from scalp to elbows, knees, and genitals. While there are a range of treatments that can help clear breakouts or manage the maddening itch, it’s rare, if ever, that a sufferer goes into complete remission.

Explainer: what is psoriasis?

The biblical description of “lepra” is now thought to actually be psoriasis rather than leprosy. At that time, affected individuals were stigmatised and cast out from their communities. Some would argue this remains unchanged today as many affected people feel like lepers.

For Many Millions, Psoriasis Means Misery

Psoriasis can also result in embarrassment, employment problems, reduced income, social discrimination and diminished quality of life. Although the disease is not contagious and has nothing to do with cleanliness, people may avoid contact with affected individuals when the lesions or their consequences are obvious.

How The Skin Disease Psoriasis Costs Us Billions

Skin disorders rarely make it on the list of big-time diseases, so when we saw a study saying that psoriasis costs the nation $52 to $63 billion a year, it was hard not to think, "Really?" And that's just for the direct costs of health care for people with psoriasis, according to the study, published Wednesday in JAMA Dermatology.

How To Take Control of Your Psoriasis and Regain Confidence

I've worked with many people who are suffering from psoriasis and psoriatic arthritis and I've seen firsthand that it's not just a condition that affects one's skin - it can make its victims feel self-conscious, unattractive, embarrassed, worried, and misunderstood.

People living with psoriasis need to know that they don't have to live with the embarrassment, the depression, and sometimes the physical pain. You can't let it stop you from doing the things you love to do. You need to take control and live the life you want live.

An overwhelming number of patients with psoriasis are dissatisfied with their treatment plans, and undertreatment may be the culprit,

The music blares. And one by one, models strut the catwalk as Project Runway television host Tim Gunn introduces them. But these are not your typical models — they are winners of a nationwide contest for psoriasis patients.

Psoriasis: Under the Skin

"Psoriasis: Under the Skin" is a new, mini-documentary film created LEO Pharma. The film features Dr. Stuart Wolfman as well as several other psoriasis patients and people impacted by psoriasis as they share their experiences of living with disease. The film focuses on the effect of disease-related itch and the psychological impact psoriasis can have on patients.

The Itch to Beat Psoriasis

Encouragement on the journey to hope and healing.

I write about my health because…

It’s okay to be frustrated and sad about your skin, but you don’t have to go through it alone. We can all teach and learn from one another and continue to support and spread awareness about psoriasis.

A moderate to severe plaque psoriasis medication. Otezla is a pill that can help you achieve clearer skin.

CIMZIA may still help you achieve clearer skin—even if you've been on another biologic.

STELARA® (ustekinumab) is indicated for the treatment of adult patients with moderate to severe plaque psoriasis who are candidates for phototherapy or systemic therapy.

Since receiving FDA clearance in 2000, the XTRAC Excimer Laser has come to be recognized by dermatologists worldwide as the market leader in the treatment of psoriasis and vitiligo. XTRAC Lasers produce a highly effective, safe, and painless therapy by delivering a targeted, super-narrow UVB band to affected areas, resulting in effective and rapid improvement without the worry of harmful side effects of invasive, systemic agents.

Our goal is to help those with Psoriasis by connecting them to the resources and information they need.

How Psoriasis changed my life…

Hi, I’m Rena and I wear my warrior scars with pride. I was first diagnosed with psoriasis at 13 years old and without a doubt it has been a roller-coaster of a ride, and I’m still on it! It is a journey that test’s physical, mental and emotional strength which can really change you as a person.

When it comes to an effective psoriasis treatment, knowledge is power. PsoriasisRx.com was created with the express mission to help psoriasis patients, their friends & families, health care professionals, and the general public to get accurate psoriasis-related information. For the vast majority of people with psoriasis, effective treatment can minimize expense and embarrassment while beautifying the skin.

The Society is managed by dedicated volunteers who work long hours to provide information on psoriasis across Canada.

The Canadian Psoriasis Network (CPN) is a national not-for-profit organization whose focus is on research, education and support for Canadians living with psoriatic disease.

the International Psoriasis Council is a global non-profit organization dedicated to advancing psoriasis research and treatment by providing a forum for education, collaboration, and innovation among physicians, researchers, and other professionals working on the physical, economic, and social aspects of psoriatic skin and joint disease.

Working to find a cure for psoriasis and psoriatic arthritis and to eliminate their devastating effects through research, advocacy and education.

Just a Girl with Spots

My hope for this blog is to spread awareness of what psoriasis is and that it is not “just a skin condition.” It’s not only about vanity; there are mental and physical challenges that we must overcome daily associated with our disease. I want to share my trials and triumphs, tips and tricks of my experiences living with psoriasis.

My Skin and I

Psoriasis causes patches of thick red skin and silvery scales. Patches are typically found on the elbows, knees, scalp, lower back, face, palms, and soles of feet, but can affect other places (fingernails, toenails, and mouth). The most common type of psoriasis is called plaque psoriasis.

At this time psoriasis cannot be cured but can be helped and improved with treatment. You may have had psoriasis for a long time and know a great deal about it, or you may have just found out that you have this condition. It is important that you know all you can about psoriasis so that you can better understand the treatments and how to get the best possible results.

Psoriasis affects 2–4% of males and females. It can start at any age including childhood, with peaks of onset at 15–25 years and 50–60 years. It tends to persist lifelong, fluctuating in extent and severity. It is particularly common in Caucasians, but may affect people of any race. About one third of patients with psoriasis have family members with psoriasis.

With psoriasis, an overactive immune system leads to skin cells that grow too quickly: New skin cells form in days rather than weeks, which causes them to build up rapidly on the surface of the skin, forming the characteristic thick patches and scales of psoriasis, according to the National Psoriasis Foundation.

Psoriasis is a persistent, long-lasting disease. You may have periods when your psoriasis symptoms improve or go into remission alternating with times your psoriasis becomes worse.

Psoriasis is considered an incurable, long-term (chronic) skin condition. It has a variable course, periodically improving and worsening. It is not unusual for psoriasis to spontaneously clear for years and stay in remission.

Psoriasis is a skin disease that causes itchy or sore patches of thick, red skin with silvery scales. You usually get them on your elbows, knees, scalp, back, face, palms and feet, but they can show up on other parts of your body.

Psoriasis occurs when skin cells quickly rise from their origin below the surface of the skin and pile up on the surface before they have a chance to mature. Usually this movement (also called turnover) takes about a month, but in psoriasis it may occur in only a few days.

Many people's psoriasis symptoms start or become worse because of a certain event, known as a "trigger". Possible triggers of psoriasis include an injury to your skin, throat infections and using certain medicines.

About 1 in 50 people develop psoriasis at some stage of their life. Psoriasis is more common in white people. It can first develop at any age but it most commonly starts between the ages of 15 and 30 years.