Where in health am I? : Home / Health Cloud / StaynHealthy / Skin Health / Rosacea

I want to ask the question, who on earth wants to be nearly clear if they can be clear - Dr. Hilary Baldwin 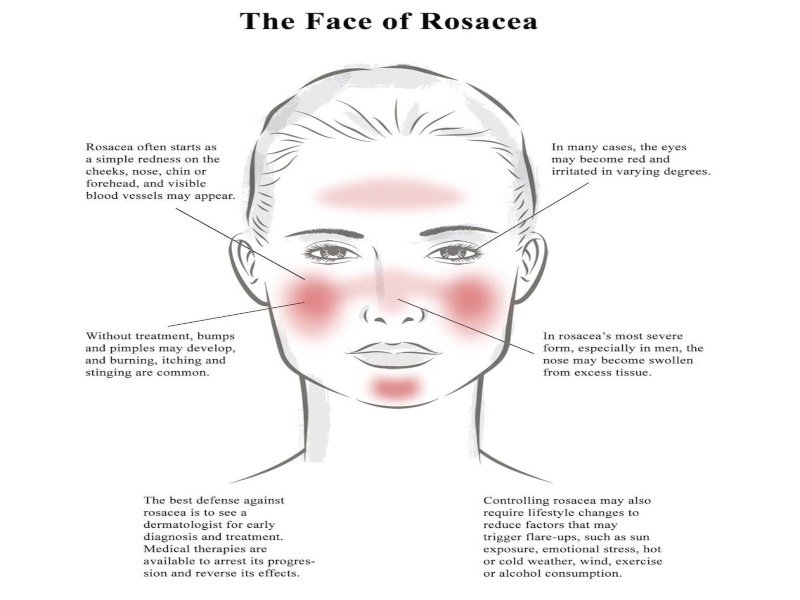 Rosacea is a common, yet misunderstood, long-term relapsing, inflammatory skin condition. It mostly affects the face, and sometimes other areas of skin. Constant redness can be accompanied by papules, pustules and telangiectasia (more commonly known as lesions, acne and dilated blood vessels). It is thought to be caused by a variety of unproven theories including blood vessel abnormalities, genetics, large numbers of Demodex Folliculorum (tiny mites) on the skin and bacteria found in the digestive system, to name a few.

A list of uncertainties often means you are left wide open to being misinformed or wrongly treated for several possible skin disorders, (like dermatitis or eczema…

Almost from the start of the COVID-19 pandemic, people with acne and rosacea have reported new or worsening symptoms due to long hours wearing protective face masks. Now a study examining mask-related rosacea and acne symptoms, popularly referred to as "maskne," during the COVID-19 pandemic confirms that not only does prolonged mask wearing cause them to get worse, but quality of life suffers as well.

#SkinSchool: The reality of rosacea

From diagnosis to treatment, the experts break down everything you need to know about this common skin condition.

A Cure for Rosacea?

No one knows what causes rosacea, a common skin disease that produces facial redness and acne-like breakouts, occasionally affecting the eyes or causing the nose to become red and bulbous. There is no cure for this “chronic, frustrating” condition, said Dr. Richard Odom, who serves on the National Rosacea Society’s expert committee, but patients can manage it by avoiding triggers that set off flare-ups and using appropriate medications.

Experts Call for Greater Attention to Persistent Redness of Rosacea

Dermatologists should place greater emphasis on persistent facial erythema of rosacea, a panel of experts concludes.

How to take care of your skin while wearing a mask

Wu recommends wearing masks made out of natural fibers, such as cotton, bamboo, or natural silk to reduce the likelihood of irritation. Face coverings properly fashioned out of these materials might be an effective barrier to aerosol particles,

How To Treat Rosacea Naturally

As the body is known to have more than 1 mysterious condition that manifests on the skin, rosacea is certainly one of them. Rosacea has a noticeable rate of hereditary predisposition, can be triggered both internal and external environmental factors and is usually found in individuals with lighter hair, blond eyes and a Scandinavian/Northern European heritage, although it can be found in other heritages as well.

In a Perfect World, Rosacea Remains a Problem

Online support groups devoted to rosacea have become a way for the uninitiated to make a diagnosis. (Not a recommended practice.)

Basic, translational, and clinical research has significantly increased our understanding of a common skin disease, rosacea, leading to novel anti-inflammatory and anti-erythematous treatments. Combination therapies, similar to those for acne and atopic dermatitis, are a key for the successful therapy of this poly-symptomatic disease.

The best soothing treatments for rosacea

Formula is everything. Go back to basics by offering your skin some calming respite.

Do Web Searches Reveal Connections Between Rosacea And Other Diseases?

A recent study may have those at risk for rosacea racing to refill their coffee mugs: A team of Brown University researchers led by Dr. Wen-Qing Li found that the more caffeinated coffee women drank, the lower their risk was for developing rosacea.

Rosacea Facial Redness That Won’t Go Away? Here’s A Treatment That Can Help.

Did you know ongoing facial redness is the most common sign of rosacea? It usually appears on the cheeks, chin, nose, or forehead. It’s a chronic skin condition that can worsen over time. That’s why it’s so important to talk to your doctor about it. There is an FDA-approved treatment for adults with ongoing rosacea facial redness, RHOFADE® (oxymetazoline HCl) cream, 1%. Applied every day, RHOFADE® cream helps tighten specific blood vessels near the surface of your skin to visibly reduce ongoing facial redness.

Coffee May Tame the Redness of Rosacea

Women who drank four or more cups of caffeinated coffee a day had a 23 percent lower risk of the skin disorder than those who drank less than a cup a month.

Don't freak out, but there are thousands of mites living all over your face

In some cases, though, mites may exacerbate rosacea.

The term “the curse of the Celts” has been used to describe this skin disorder, because it typically occurs in persons of Irish, Scottish or northern European extraction who are fair skinned and easily sunburn.

Red Skin & Rashes Are Not Always The Result Of Rosacea

Though it might not seem to belong on this list of primarily skin conditions, lupus erythematosus is sometimes mistaken for rosacea because of the butterfly-shaped rash it can cause on the cheeks and nose.

Rosacea: Who Gets and Causes

Why do some old men have big red noses? No, it’s not alcohol

It’s caused by a common skin condition called rosacea. If the rosacea is not properly treated or controlled, within a few years the nose can grow and become bulbous. This is the condition rhinophyma.

As The British Skin Foundation simply puts it, ‘the rash and the blushing associated with rosacea can lead to embarrassment, lowered self-esteem and self-confidence, anxiety and even depression’. For me, this couldn’t be more accurate.

10 Secrets Only People With Rosacea Know

More than 200 shared comments about their personal experiences of living with rosacea. While each case of rosacea is unique and symptoms vary widely from patient to patient, there were many commonalities among their experiences with the disease and how it impacted their social lives. Here are just some of the most common facts that they shared about living with rosacea.

11 People Describe What It's Really Like to Have Rosacea

Most of us assume that, if we ever dealt with skin-care problems, we'd leave them behind in our teen years (along with our questionable hairstyle choices). Unfortunately, that's not always the case. And sometimes the skin issues we develop when we're older can be a lot more confusing and challenging to deal with than the occasional zit.

Since 1992, the NRS has made a difference in the way rosacea patients are treated and the way this widespread disorder is perceived and understood. T