Where in health am I? : Home / Health Cloud / StaynHealthy / Skin Health / Vitiligo

Toward those diagnosed with Vitiligo, I have these words to say: You are not alone. There is strength in your supposed “illness”, and there is courage for those who dare to find it - Ogo Maduewesi, Founder & Executive Director, VITSAF 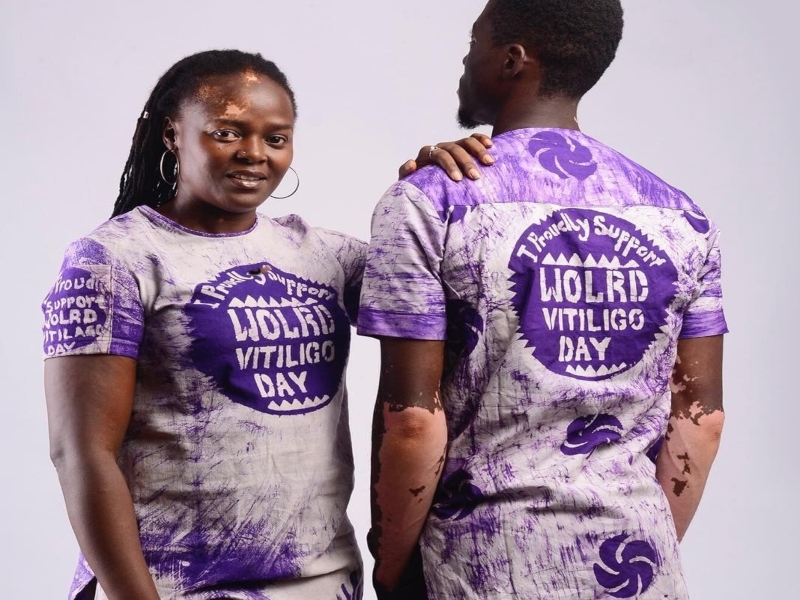 Stella Pavlides has vitiligo. It’s an autoimmune condition in which the body attacks the cells, called melanocytes, that give skin its color. She was 22 years old and studying to be a court reporter when she first developed unsightly white patches on her hands and feet, then around her mouth, eyes, arms, legs and groin.

“People say vitiligo doesn’t kill you, but it kills your spirit,” she told me. “Kids get stared at, spit on, beaten up.” Although the condition is most obvious and often most emotionally and socially devastating when it afflicts dark-skinned people, Ms. Pavlides said her disorder was painfully apparent on her light tawny Greek skin.

“I wouldn’t go out with my…

Even as scientists celebrate progress in the lab, a stigma-busting movement asserts that those with the autoimmune skin condition are more in need of acceptance than medicine.

“I decided to do a fitness competition back in London, which helped to raise awareness about vitiligo. The support I got from family and friends was admirable...

New treatment in the works for disfiguring skin disease, vitiligo

In many parts of the world there is great shame and stigma tied to vitiligo, an autoimmune disease of the skin that causes disfiguring white spots, which can appear anywhere on the body. In some societies, individuals with vitiligo, and even their family members, are shunned and excluded from arranged marriages. The rejection is so crippling that one person suffering from the disease even requested an amputation of his forearm affected by vitiligo because he could marry with only one arm, but could not with vitiligo.

Vitiligo (pronounced vit-uh-LIE-go) is a medical condition in which patches of skin lose their color. This occurs when melanocytes, the cells responsible for making skin pigment, are destroyed. Vitiligo can affect any part of the body, and it can occur in people of any age, ethnicity, or sex. A diagnosis of vitiligo can be life-altering. Patients may struggle with self-esteem or depression, and they often have to deal with social stigma, due to misunderstanding about the contagiousness of the condition.

What Is Vitiligo and Why Do People Develop It?

Winnie Harlow and Amy Deanna, models who have vitiligo, are defying the stigma associated with the skin condition but it’s still a burden for many people.

I already had body dysmorphic disorder. Then my skin started changing color.

One percent of Americans have vitiligo, the skin disorder made famous by Michael Jackson. I'm one of them.

this photographer is shooting almost 100 people with vitiligo

Finding and capturing subjects with vitiligo has been a large-scale effort for Brock, seeing as it is much rarer than beards or freckles. He finds himself most drawn to people who haven’t achieved modeling contracts or acting jobs.

Explainer: what is vitiligo?

Most famously, Michael Jackson was diagnosed with the condition, but more recently Jon Hamm from TV’s Mad Men has it, as does model Chantelle Brown-Young on America’s Next Top Model. So what causes these white spots, and how are they treated?

Highlights in pathogenesis of vitiligo

Vitiligo is a common pigmentary disorder. Many studies across decades and all over the world have attempted to illustrate the pathogenesis behind it; however, the pathogenesis of vitiligo remains elusive.

Inheriting A Rare Skin Condition, And The Ability To Laugh About It

People with vitiligo gradually lose pigment in their skin, often in patches that appear randomly and grow over time. But that wasn't the case for Cheri Lindsay. The white pigment on her skin spread rapidly across her body and around her eyes, "like a mask," over the past four years, she says.

Learning to Live With Vitiligo

No one is sure just what causes the disease. There is no common denominator. It may be inherited, though as far as I know, no one else in my family has ever had this. It may result from a disorder in the immune system. It may result from a single stressful incident that occurred long before.

Vitiligo is less obvious in light-skinned people, though it can still be traumatic and result in ostracism or teasing.

Vitiligo and alopecia areata are common autoimmune diseases of the skin. Vitiligo is caused by the destruction of melanocytes and results in the appearance of white patches on any part of the body, while alopecia areata is characterized by patchy hair loss primarily on the scalp, but may also involve other areas as well. At first glance, the two diseases appear to be quite different, targeting different cell types and managed using different treatment approaches. However, the immune cell populations and cytokines that drive each disease are similar...

“We now have a much better understanding of the immunological pathways involved in vitiligo, which is providing insight on how to target and treat the disease better,” an expert says.

MyVitiligoTeam is a free social network designed specifically for adults with vitiligo, their spouses, and parents of children with vitiligo.

We are a diverse group of individuals united by a common skin condition. We were created to be a resource and a social network for individual with the condition known as vitiligo. We support the whole person....mind, body and spirit.

While many of those diagnosed with Vitiligo view it as an unfortunate affliction, there are a number of people out there who embrace their spots and couldn't imagine life without - we are those people. We LOVE OUR SPOTS (and love others with this condition)!

Vitiligo Support and Awareness Foundation (VITSAF) is a general membership, not-for-profit, patient driven, patient-advocate organization incorporated in Nigeria and passionately concerned about the needs of individuals living with Vitiligo skin imperfections, altered images and autoimmune disorders primarily in Africa, helping ameliorate the agony people suffer as a result of turning from black to white and altered image.

To improve the quality of life for individuals with vitiligo through education, research, clinical care, and community support.

Focusing on the diagnosis and treatment of Vitiligo while working for a cure.

A charity who supports, inspires and educates about vitiligo.

VSI is a patient driven 501(c)(3) nonprofit organization offering a comprehensive resource of vitiligo education, research and awareness for those whose lives have been affected by vitiligo. We are here to address your questions and concerns and help you connect with our community. You will find the hope, support and healing that can only be offered by those who understand best – those who have walked in your shoes.

American Vitiligo Research Foundation Inc. (AVRF) provides public awareness about vitiligo through dedicated work, education and counseling. We seek to make a difference worldwide to those afflicted by the disease, focusing on children and their families.

The Dappled Darlings Community is a gathering place for women with vitiligo who want more – more support, more inspiration and more chances to share your story and meet others who are doing the same. You believe in more. We believe more is possible, together.

I live in London, UK and was diagnosed with Vitiligo at the age of 13. This is my Blog where I document my journey treating the skin condition.

Vitiligo is an acquired depigmenting disorder of the skin, in which pigment cells (melanocytes) are lost. It presents with well-defined milky-white patches of skin (leukoderma). Vitiligo can be cosmetically very disabling, particularly in people with dark skin.

Vitiligo (vit-ih-LIE-go) is a disease that causes loss of skin color in patches. The discolored areas usually get bigger with time. The condition can affect the skin on any part of the body. It can also affect hair and the inside of the mouth.

Most people who have vitiligo will develop the condition prior to age 40; about half develop it before age 20.

No one knows the exact cause of vitiligo. It may be an autoimmune disease in which the body’s immune system attacks and destroys the skin cells that make color.

Vitiligo is a long-term condition where pale white patches develop on the skin. It's caused by the lack of melanin, which is the pigment in skin. Vitiligo can affect any area of skin, but it commonly happens on the face, neck and hands, and in skin creases.

Vitiligo may occur at all ages but usually begins between the ages of 2 and 40. All races may be affected. Despite a common belief, vitiligo is not seen more often in individuals of African descent; this may seem to be true only because the condition causes a more obvious cosmetic problem for darker-skinned individuals.