Where in health am I? : Home / Health Cloud / StaynHealthy / Spine Health / Transverse Myelitis 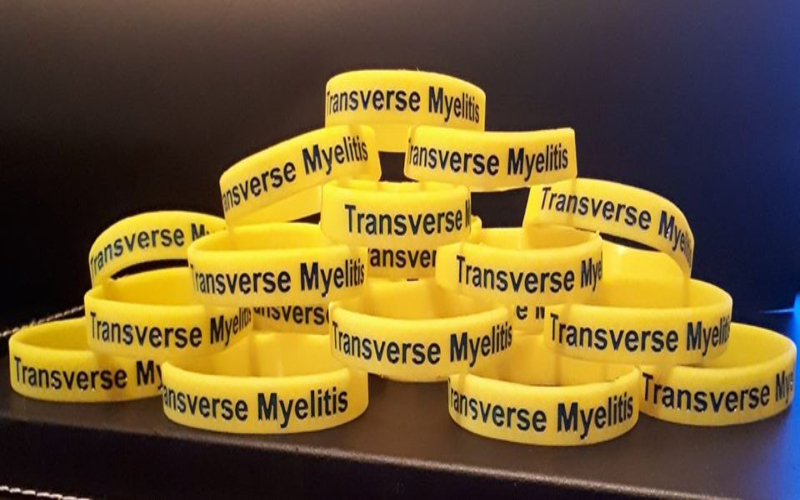 I remember the first few weeks after my daughter, Erica, was diagnosed with Transverse Myelitis. I thought I was the only person in the world going through this experience. Inflammation, can’t an antibiotic take care of that?  If only I had someone to sit down with me and explain the life altering change we were about to go through. This feeling, even nearly 3 years later, is so isolating. That is why it is so important for me to reach out to other families.  I have learned so much from other parents and adults living with TM. I have also made wonderful, lifelong friends. I relate to them far more than with my childhood friends.

One night, about a week into our hospital stay of six long weeks, I had to get out of the room.  I couldn’t look anymore at the wheelchair staring at me. It was a reality check for me every morning. I had settled Erica for the night and asked the nurses to check on her. Before leaving the room, I asked her if I could bring her anything from downstairs. I was going for a Coke. She looked at me and said “yeah, Mom, can you bring me a new pair of legs?”

Wow, the question knocked the breath of me. I went and cried for what seemed like hours over that request. I made a decision at that moment, to find some way to move forward with what was handed to us. I went back upstairs and told her that I found this really bad pair of legs in the waiting area, but they were extremely hairy and had ugly shoes. That comment made her smile and we laughed and cried together. I didn’t know what else to do but joke. My 12 year old daughter who lay there paralyzed from the waist down wanted new legs. She was an enthusiastic dancer and wanted to try out for cheerleading. How did this happen and why?

I wanted to share that story because I remember thinking how do we get through this? Time and comfort from other parents and others living with TM. That is what has helped me. I finally met the point of acceptance sometime this past summer. I convinced Erica to go to a day sports camp and after begging and pleading, she went. I walked into the gym that first day without her knowledge and I saw her smiling. It was a smile I had not seen in over 2 years. She was playing basketball, which was a favorite pastime for her before TM.  I knew she had accepted life and I had to as well.

I met a family our first year at the TMA camp. I was amazed at how they acted, just happy. I, of course, was so angry at life and what we had lost. That was October 2011. This past summer at camp, we were back with that same family and the mom commented on how much I had changed. She was glad that I wasn’t angry anymore and really saw a difference in me and my whole family.  I don’t embrace what has happened, and trust me I have my moments, my days, even my weeks.  I still get mad when my daughter can’t just jump in the car and go out with friends. When even a trip to the mall is such a big event or seeing her sitting on a towel at the beach instead of acting like a teen should, I cry.

When I started writing this blog, I had no idea what I wanted to say. Erica lost complete function in less than 30 minutes and our lives changed forever.  I wanted to share how we have moved forward.  To have acceptance of our life changes has been freeing. I will never embrace what my daughter has had to miss out on, and I grieve for her loss.

I do feel as if she and others have been completely robbed of so many things. However, this has opened so many doors for us. Erica is now in her first year playing basketball and can’t wait to go to college. She talks of her future and I know that she will accomplish all the goals she sets. From the beginning we have had the attitude of “I can do everything that I did before, just differently.” That is an attitude that, as a mother, is hard to keep sometimes.

I still don’t have answers to how and why and I know I will never get those. I do know that having TM has put us on another path in life. I can’t tell her anymore to work harder and she can try out for cheerleading next year or that she will dance at next year’s recital, but I can tell her that life holds more for her than that.

Transverse Myelitis: What Most People Don’t Know and What Most Doctors Won’t Tell You

The damage caused by Transverse Myelitis in the span of a few minutes or days can leave a person with a lifetime of agony. Transverse Myelitis is an auto-immune disease which affects the central nervous system. This disease strikes children, adolescents, and adults, from everywhere, leaving them partially or totally immobile.

Sudden Paralysis and 'The Best Seat in the House'

In 1996, Allen Rucker had no real complaints - married, two kids, a house in West Los Angeles. At the age of 51, his career as a television writer was looking up. He had a little knee trouble, but looked forward to a return to a running. Then one day, a Tuesday, out of the blue he started to feel a burning sensation around his waist. Inside an hour and a half, he was paralyzed from the waist down by a rare condition called transverse myelitis. It sounds like a nightmare, and he's had a few of those, but in his new memoir, Allen Rucker describes his new life with honesty, accessibility, and impudence. He titles one chapter "Cripple Do's and Don'ts."

A Dancer Relearns How to Walk

Michelle recalls still thinking that her problem had a harmless cause as she waited hours in triage. Eventually, she realized that she hadn’t used the restroom all day. By the time she was admitted, doctors observed that not only were her legs rapidly becoming paralyzed, but that she’d lost bladder function — a red flag for a serious spinal cord issue.

I Choose to Live My Life!

Without making it a sob story, I wanted to share a bit of my history. A lot of people have illnesses or things happen to them where the only choices are to succumb to it or to work hard in order to have a life as well as you can get.

My name is Lucy and I am 22. I was diagnosed with TM in August 2013, a few days before I turned 20. My story started at least 9 months before I received an actual diagnosis, and now I am slowly learning to accept and live with this condition.

It all started with a sharp shooting pain across my upper back and going up to my neck. Following that, I felt a tingling sensation running up and down my right arm, like ants crawling . It was uncomfortable but not painful, so I did not pay much attention to it.

Once Paralyzed, Victoria Arlen Emerged from a Coma to Become a Champion Athlete

The paralympic gold medalist opens up about waking up from a coma, living with paralysis, and learning to walk again.

Transverse myelitis (TM) includes a pathobiologically heterogeneous syndrome characterized by acute or subacute spinal cord dysfunction resulting in paresis, a sensory level, and autonomic (bladder, bowel, and sexual) impairment below the level of the lesion. Etiologies for TM can be broadly classified as parainfectious, paraneoplastic, drug/toxin-induced, systemic autoimmune disorders, and acquired demyelinating diseases.

Accepting, not embracing our life with Transverse Myelitis: a mom’s point of view

I remember the first few weeks after my daughter, Erica, was diagnosed with Transverse Myelitis. I thought I was the only person in the world going through this experience. Inflammation, can’t an antibiotic take care of that? If only I had someone to sit down with me and explain the life altering change we were about to go through.

Transverse myelitis (TM) is a rare inflammatory disease causing injury to the spinal cord with varying degrees of weakness, sensory alterations, and autonomic dysfunction (the part of the nervous system that controls involuntary activity, such as the heart, breathing, the digestive system, and reflexes). The first cases of acute myelitis were described in 1882 and were attributed to vascular lesions and acute inflammatory events.

TM often develops in the setting of viral and bacterial infections, especially those which may be associated with a rash (e.g., rubeola, varicella, variola, rubella, influenza, and mumps).