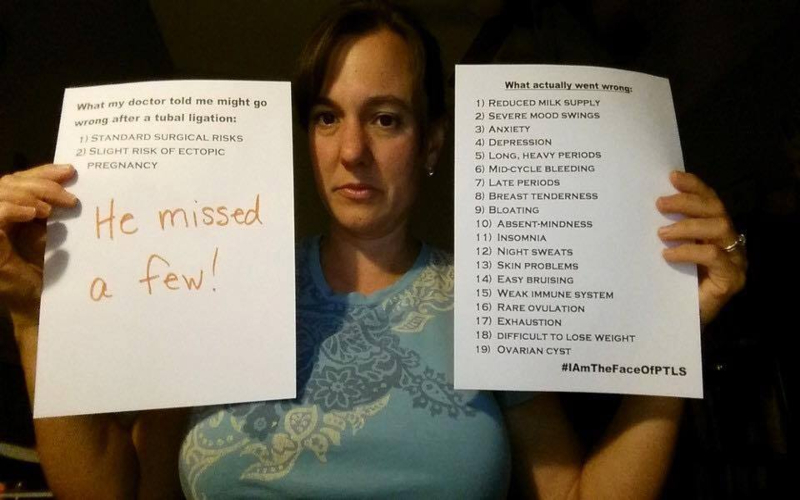 All Tied Up: Selling Sterilization

The biggest issue to face women concerning sterilization is not about choice, but rather one of informed consent, and whether or not women are being given all the information they need to make a truly informed decision. Unfortunately, doctors often trivialize the possible complications and thereby make the side effects of tubal ligation invisible.

Brochures on sterilization misrepresent tubal ligation with subtle terms that lessen the severity of the procedure. After all, it’s all about how it is presented. Words can have emotional connotations and the medical community does not want to scare women by using the terminology that might give light to the procedure that is actually occurring.…

It’s the end of an era for Amanda Dykeman, one of the many women who has campaigned against the permanent contraceptive device Essure. Bayer, the device’s manufacturer, announced earlier this week that they will no longer sell or distribute the device in the US after Dec. 31 this year. The move comes after years of debate — both in court rooms and in the court of public opinion — about the safety of the device.

Indigenous women are murdered, go missing or face abuse at much higher rates than non-Indigenous women in Canada. Recent news stories now report that birthing mothers have also been sterilized (given tubal ligations) without their full and informed consent, as recently as 2017. These shocking stories describe women being told that they cannot see their newborn babies until they undergo a sexual sterilization surgery.

Indigenous Women in Canada Are Still Being Sterilized Without Their Consent

In the 20th century, the U.S. and Canada carried out a quiet genocide against Indigenous women through coerced sterilization. In 2019, it’s still happening.

Is “Getting Your Tubes Tied” Right for You?

If you’re sure your family is complete, and you’re tired of short-term birth control options, tubal ligation, also known as tubal sterilization or tubectomy, may be right for you.

The Outrageous Reasons These Women Couldn’t Get Their Tubes Tied

People are being denied tubal ligations because they're too young, childless, only have one child, aren't married—or for any other reason their doctor chooses.

Before Essure came under fire, it was the hot new thing in birth control. Unlike pills or patches or even IUDs, Essure is permanent. And unlike laparoscopic tubal ligation (getting your tubes tied), it doesn’t require cutting through the stomach and general anesthesia.

Require Doctors to inform women of PTLS before a tubal ligation

Currently, doctors are not required to inform their patients about any of the possible outcomes after having a tubal ligation. It is commonly conceived as a safe form of birth control. There are side effects that can change the rest of a woman's life, her well-being and cause death if symptoms are left untreated or overlooked. Tubal ligation is a fix for one thing but creates a platform for guaranteed future problems.

The Controversial Birth Control That Destroys Your Body

Despite thousands of women's complaints about Essure—ranging from uterus perforation to miscarriage—the FDA allows the birth control device to remain on the market. Jessica Smith describes how her Essure implant turned her body against her.

Why Sterilization Is The Most Popular Form Of Family Planning

For female sterilization, the failure rate is half a percent, and for vasectomy, it's .15 percent. Compare that to injectable birth control, which is 5 to 6 percent, the pill, which is 9 percent, condoms which are around 18 percent.

Closed for business: 5 reasons I love having my tubes tied

Besides having my kids, it's the best thing I ever did with my reproductive organs. Why, you might ask, do I love being closed for the baby business so much?

The deaths have put a spotlight on the prevalence of sterilization as a method of contraception in India, and whether the operations can really be regarded as voluntary.

Getting Your Tubes Tied Is a Giant Pain in the Ass

For women who know deep down that they never want children, that hell no response to the thought of motherhood endures long after the echoes of a temper tantrum in the candy aisle at Target subside. But women who want to be sterilized often face obstacles that aren't present for other medical procedures — obnoxious, patronizing speeches from doctors, flat out refusal from health care providers, requests for spousal permission or proof that the woman seeking to dam up her Fallopian tubes would be an unfit mother.

Doctors ought to be women’s greatest allies in the fight for contraceptive and reproductive rights. And yet many of them are failing one subset of women — those, like me, who know they never want to have children.

How My Sex Life Changed When I Got My Tubes Tied

In reality, it's been part of my sexual liberation and one that I think more women, and mothers, should know about. Bottom line: Tube-tying leads to great sex.

I told my doctor I didn’t want kids. She sent me to a therapist.

“My husband has nothing to do with my desire not to have children,” I continued, hoping I did not look as flustered as I felt. “I knew before I met him that I did not want children. In fact, I was the one who first brought it up with him.”

Meet The 20-Somethings Who Want To Be Sterilized

Women who seek sterilization tend to cluster in certain demographic groups. Those who are over 35, have been married or have had at least two children are more likely to undergo the procedure, which is done either by cutting or clamping a woman's fallopian tubes or by placing tiny inserts that prevent the joining of a sperm and egg.

I got a tubal at 26 years old and had to fight to get one despite a) living in NYC, b) being married to a man as adamantly child-free as me, c) working in not one but two fields that are well-known for being unfriendly to kids (law and entertainment).

This is a different kind of post than I have ever shared here on A Bit of Sunshine but I am feeling very compelled to open up about some hidden suffering I’ve had over the past three years because I feel so strongly that if even one women is helped through my story than it is worth it to share. Here it goes.

A part of me wishes no one had ever come up with a name for what can happen after a woman has a tubal ligation. (Post Tubal Ligation Syndrome, or PTLS.) Calling the symptoms anything that sounds medical makes doctors roll their eyes because it’s not in a diagnostic book of any kind. There aren’t medical studies done to prove its existence and therefore the medical community denies PTLS.

But this tragic event does provide a healthy space for reviewing the inherent problems in such schemes so women are better protected from coercion and to ensure that family planning is safe and minimally invasive. While economically important, the policy and program cannot and should not be measured solely by its economic impact.

Why is it so difficult for young women to get their tubes tied?

I have no desire to have kids, and most traditional methods of birth control cause me pain and discomfort. It took me 13 years to find a doctor who listened when I said I wanted to undergo a tubal ligation.

What It Feels Like to Get Your Tubes Tied: My Personal Experience

I was able to find a doctor who did the procedure with no problem. But man, I don't know if it's just my body or what, but this was a lot bigger deal than a lot of people made it out to be.

What to Expect After Tubal Ligation Surgery

Tubal sterilization remains to be one of the most popular forms of contraception worldwide with about 0.6 million women undergoing the procedure annually in the US alone. However, about 12% of women come to regret their decision and ultimately explore tubal reversal options for various reasons. Amongst younger population less than 30 years of age, post-sterilization regret can be as high as 1 in 5 women.

Study after study has demonstrated a very high incidence of post-sterilization regret in women in their 20s. I myself am guilty of gently turning down very young women’s requests for permanent sterilization. So many things can happen to a young woman to make her change her mind about childbearing.

All Tied Up: Selling Sterilization

Brochures on sterilization misrepresent tubal ligation with subtle terms that lessen the severity of the procedure. After all, it’s all about how it is presented. Words can have emotional connotations and the medical community does not want to scare women by using the terminology that might give light to the procedure that is actually occurring.

Often after our suffering has began & we've started researching our symptoms do we stumble upon the words PTLS & we begin to cry as we learn of what our Dr's could have warned us about but didn't. With the help of the internet we are now able to find one another all over the world & begin a movement. We’re demanding recognition & education by Dr’s to this largely debated syndrome before tubal ligation because #WeDeserve2Know.

This blog is about post tubal ligation syndrome, its side effects, and how tubal reversal helped to relieve my symptoms of PTLS. It is also about my life after tubal reversal, and how I feel about the second chance I've been given...

I am 23 with no kids. Follow me during my Tubal Ligation adventure!

This blog is about post tubal ligation syndrome, its side effects, and how tubal reversal helped to relieve my symptoms of PTLS. It is also about my life after tubal reversal, and how I feel about the second chance I've been given...

Tubal ligation (getting your "tubes tied") is a type of surgery. It prevents a woman from getting pregnant. It is a permanent form of birth control. The surgery closes the fallopian tubes, which connect the ovaries to the uterus. It usually takes about 30 minutes. Almost all women go home the same day. Women can return to most normal activities within a few days. Tubal ligation can sometimes be reversed, but not always.