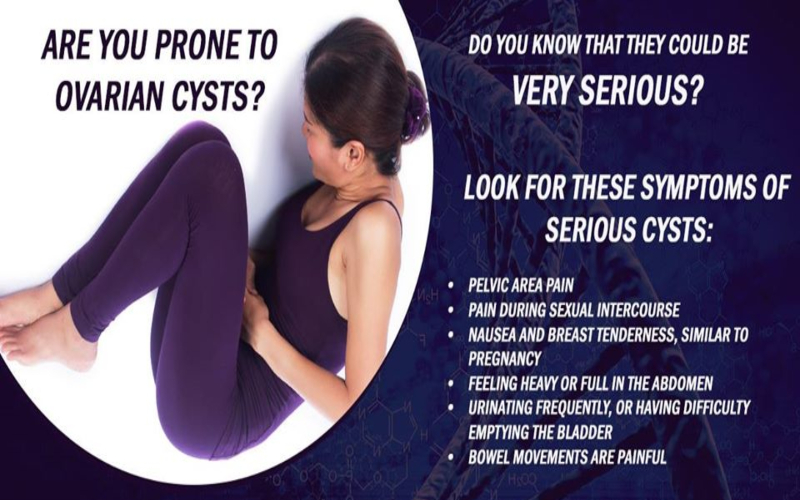 Of the many things we have in common as women, ovarian cysts are at the top of the list. If you speak to a friend or a family member, chances are at some point in their lifetime they have been diagnosed with an ovarian cyst.

If you have an ovarian cyst…don’t panic! Cysts on the ovaries are extremely common. The key to minimizing your anxiety level is to talk to your gynecologist and become educated about the type of cyst you have and develop a follow up plan. A cyst on the ovary is a fluid filled space within the ovary, which usually results from ovulation.

Most cysts resolve on their own by breaking or being re-absorbed by your body. Occasionally they…

My Journey With Ovarian Cysts

As I began researching ovarian cysts, I felt terror sweep through me as I read message boards and articles about the malignant potential of complex ovarian cysts. It was such a scary time for me. As I searched for information, I realized how terrified and confused other women are about their own ovarian cysts.

While not fatal being diagnosed with a cyst is quite a scary thing to go through. There is very little information on the Internet about what would happen in the hospital and at various appointments.

When my doctor said I had a “teratoma” or “tumour“, I was shaken up because I didn’t know whether or not that meant it could be cancer.

For those of us that have suffered from ovarian cysts, it’s likely that we’ve had invasive testing and have been bounced around, feeling hopeless and disoriented by the medical system.

Of the many things we have in common as women, ovarian cysts are at the top of the list. If you speak to a friend or a family member, chances are at some point in their lifetime they have been diagnosed with an ovarian cyst. If you have an ovarian cyst…don’t panic! Cysts on the ovaries are extremely common.

This patient support community is for discussions relating to ovarian cysts.

Infrequent complications associated with ovarian cysts include: •Ovarian torsion. Cysts that become large may cause the ovary to move out of its usual position in the pelvis. This increases the chance of painful twisting of your ovary, called ovarian torsion. •Rupture. A cyst that ruptures may cause severe pain and lead to internal bleeding.

Ovarian cysts form for numerous reasons. The most common type is a follicular cyst, which results from the growth of a follicle. A follicle is the normal fluid-filled sac that contains an egg. Follicular cysts form when the follicle grows larger than normal during the menstrual cycle and does not open to release the egg. Usually, follicular cysts resolve spontaneously over the course of days to months. Cysts can contain blood (hemorrhagic cysts) from leakage of blood into the egg sac.

A cyst is a fluid-filled sac. In most cases a cyst on the ovary does no harm and goes away by itself. Most women have them sometime during their lives. Cysts are rarely cancerous in women under 50. Cysts sometimes hurt - but not always. Often, a woman finds out about a cyst when she has a pelvic exam.

Many small ovarian cysts will resolve and disappear over a few months. You may be advised to have a repeat ultrasound scan after a few months or so. If the cyst goes away then no further action is needed.

Fortunately, most ovarian cysts do not require surgical removal and are not caused by cancer. Cysts can vary in size from less than one centimeter (one-half inch) to greater than 10 centimeters (4 inches).

Can I prevent ovarian cysts? No, you cannot prevent functional ovarian cysts if you are ovulating. If you get ovarian cysts often, your doctor may prescribe hormonal birth control to stop you from ovulating. This will help lower your risk of getting new cysts.