Indeed, it has always seemed to me that one of the singular advantages of being a woman lies precisely in the "dark continent" quality of our genital cartography - Daphne Merkin 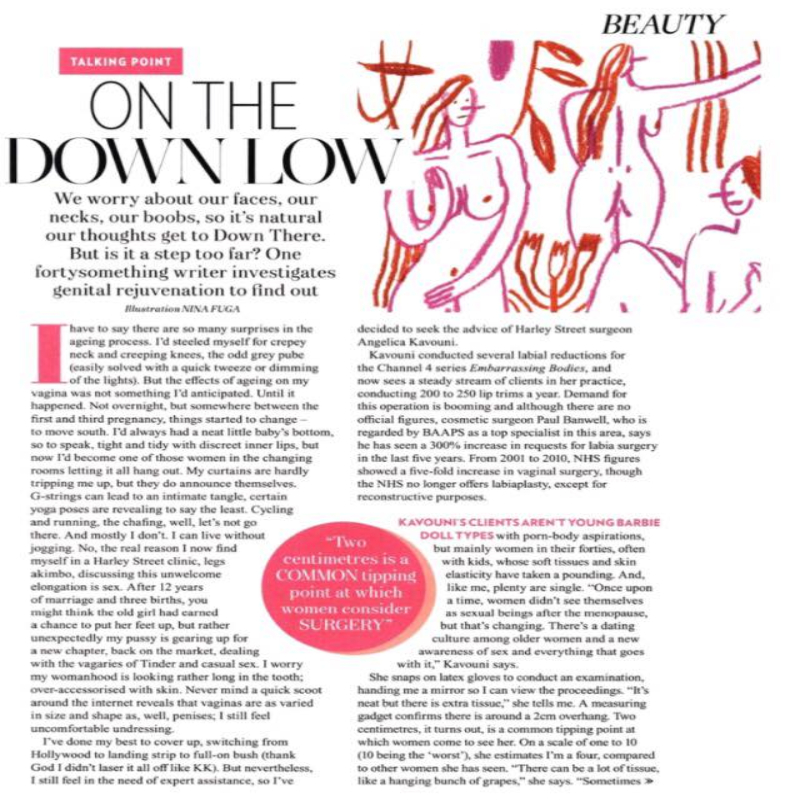 These are cruel times for vaginas. Lately, as if I don't have enough to worry about, with the deadline on various unkept 2005 resolutions fast upon me, I have begun obsessing about various aspects of my genital appearance. Take my labia minora, for instance. Tucked away as those intimate folds of flesh are - hidden in the underbrush, you might say - I have never given them much thought, except as they relate to experiences of sensual pleasure.

Ditto my labia majora, which dutifully served their purpose in guarding the entryway to what the Victorians would have quaintly referred to as my maidenhead. As for the much vaunted hymen (named for the Greek god of marriage), mine remained…

In Defence Of Designer Vaginas

Why discourage a procedure that can have benefits for these women who often suffer in silence?

The real risks and benefits of "designer vagina" surgery — which includes procedures such as labial reduction and laser vaginal rejuvenation — are poorly explained on websites that consumers are likely to visit, a new study finds.

Designer Parts: Inside the Strange, Fascinating World of Vaginoplasty

Is the emphasis on cultivating genital Shangri-Las a predictable extension of our body-obsessed culture, in which breast and lip augmentations are embraced as wholeheartedly as fad diets, Spanx, and skincare regimens?

Designer Vaginas: Is Female Circumcision Coming Out of the Closet?

The good news for labiaplasty patients (read victims) is that though they may regard female circumcision as foreign and incomprehensible, what they are doing is altering their genitalia to conform to a certain set of notions and expectations about what genitalia should look like if they are to be appropriately feminine and desirable.

Giving Birth Ruined My Vagina, So I Got a New One

It was at my six-weeks-postpartum appointment that someone in the birth world finally admitted what we all fear to be true: vaginal birth can ruin your vagina, even might ruin it—and, in my case, did.

My day at the designer vagina showcase

In the age of narcissism and self-creation, it shouldn’t necessarily surprise me as much as it does that there’s a demand for surgical vaginal beautification.

Whether genital plastic surgery will ever become as popular and acceptable as other forms of plastic surgery remains to be seen. The rising rates of cosmetic surgeries suggest that women are more willing than ever to take risks to enhance themselves.

Options for Vaginal Rejuvenation From Vaginoplasty to FemTouch

It’s a hot, and somewhat awkward topic, but hey, when thousands of women are searching for ways to tighten up their who-ha, get some feeling back in “the vicinity” and stop those darn bladder leaks, it’s time we lend them an ear. There are a few options available, so let’s go over the top choices and you make a decision.

In this documentary, a woman tries to understand what convinces young girls that their labias are abnormal, and what leads them to a surgery table to have them cut. It's a reflexion about the way a "normal" vulva should look, about difference, maybe about the desire to keep a little girl's vulva forever. The movie may show vulvas sometimes, but never in a pornographig way. It's rather professional and medical, or artistic.

The rise of the designer vagina

In our quest for perfection and amid a growing obsession with body image, it seems women now have a new part of the anatomy to worry about – our vaginas. Genital plastic surgery is one of the fastest-growing areas in cosmetic surgery, and one of the most popular procedures being requested – mostly by young women – is a labiaplasty.

Why Would Women Want To Have Plastic Surgery On Their Genitals?

Probably few surgical procedures are as controversial as labiaplasty, which refers to plastic surgery on the labia, the fleshy folds that enclose and protect the rest of women’s external genitals.

We live in a time of thong underwear, of designer sorrows and of artificially enhanced gratifications. So step right up, ladies. Your labia may not be up to snuff - they may extrude too much or lack youthful plumpness - but a quick nip/tuck or strategic injection of fat from Dr. 90210 and his colleagues will take care of that.

6 Things Your Should Know Before Getting a Designer Vagina

When I think designer, brands like Michael Kors, Versace and Chanel come to mind. Their handbags, dresses and swimsuits are so pretty, they make any mujer feel like a million bucks. And there’s another thing you can purchase to feel like a new woman. If you’re not thrilled about the look and feel of your vage, you can get yourself a labiaplasty.

The idea of individual choice underpins the ethical acceptability of all cosmetic surgery. Women who feel embarrassed about the size and shape of their genitals have a right to be able to change them if they so desire, but what happens if individual choice is being shaped by outside influences?