Where in health am I? : Home / Health Cloud / StaynHealthy / Women's Health / Women and Stroke

In addition to experiencing hallmark signs such as face drooping, arm weakness and speech difficulty, women often have unique stroke symptoms. These can include fainting; general weakness; difficulty breathing or shortness of breath; confusion or disorientation; hallucinations; and nausea or vomiting - Tate Gunnerson 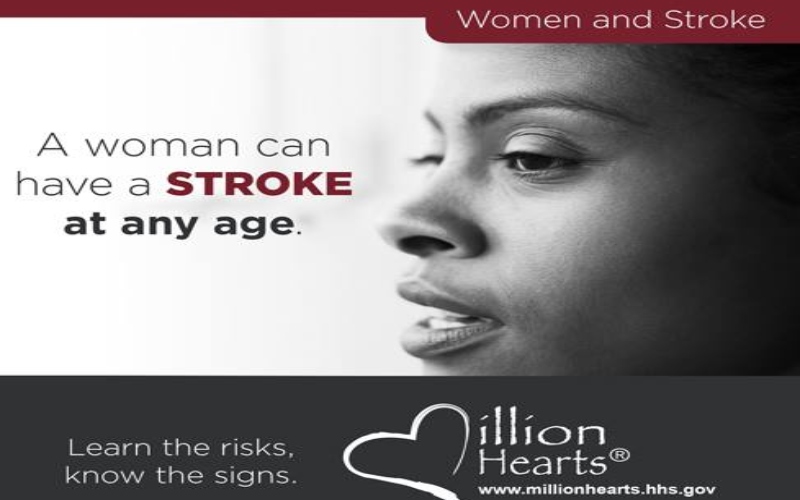 image by: U.S. Department of Health and Human Services

Women are at greater risk for strokes than men, and for the first time women and their doctors have evidence-based guidelines on how to reduce that risk.

"The take-home here is really about starting prevention earlier," says Dr. Cheryl Bushnell, an associate professor at Wake Forest Baptist Medical Center in Winston-Salem, N.C., and lead author of the guidelines published Thursday in Stroke, a journal of the American Heart Association.

Mediterranean diet reduces stroke risk in women – but not men

Symptoms of a Stroke in Women vs Men

Men and women who have strokes often feel similar symptoms of stroke such as face drooping, arm weakness and speech difficulty. Other common signs include problems seeing out of one or both eyes and balance or coordination problems. But some signs of stroke in women can be subtle enough to be missed or brushed off. That can lead to delays in getting time-sensitive, lifesaving treatments.

As a neuroanatomist at Harvard, I studied how our brain creates our perception of ­reality. And then one morning, I woke up with a sharp pain directly behind my left eye. In the course of four hours, I lost the ability to walk, talk, read, write, or recall any of my life. I was experiencing a major hemorrhage, bleeding in the left half of my brain, which rendered me an infant in a woman’s body.

After A Stroke, Women's Lives Are Worse Than Men's

I was 26 years old when I had my stoke. It was a haemorrhage and out of the blue, on the left side of my brain. I was absolutely shocked. It was just a normal day.

On arrival at the hospital, which by then was quite late, perhaps gone 11pm, I was examined by a doctor who said she was sure it wasn’t a stroke, (although I knew it was).

Women die from stroke at a much higher rate than men, according to the American Health Association. And hormonal contraceptives nearly double women’s risk of stroke.

Most U.S. Women Wouldn't Know A Stroke If They Saw Or Felt One

When the American Heart Association and the American Stroke Association first began tracking women's awareness of stroke back in 1997, only 11 percent of women said they felt well-informed about what to watch for. The number today has crept higher but still not high enough, researchers say

Excessive sleeping or taking long naps was tied to an increased risk of having a stroke.

Stroke Risk Declining in Men but Not Women

“Maybe we’re not controlling risk factors to the same extent in women. Or maybe there’s a biological difference in the way these risk factors cause strokes in men versus women.”

Study on Stroke in Women Focuses on Risks From Pregnancy

Controlling high blood pressure and other risk factors related to pregnancy and use of birth control can significantly reduce a woman's chance of suffering a stroke later in life, according to guidelines published Thursday.

Women More Likely to Have Strokes Than Men

The medical community all but threw a party for itself when it recently announced that strokes had declined by nearly 40 percent in the last two decades. A recent study threw cold water on that, showing that only about half of us should be celebrating.

Research presented at the American Stroke Association shows risk of ischemic stroke increased from 2.4% to 3.8% for women pregnant over the age of 40

What accounts for the higher incidence of stroke in young women? Leppert said pregnancy, birth control pills and conditions such as migraines and auto-immune disorders, which are more prevalent in women, may help to explain why.

Women are at greater risk for strokes than men, and for the first time women and their doctors have evidence-based guidelines on how to reduce that risk.

The lifetime risk of stroke for women between the ages of 55 and 75 in the United States is 1 in 5. Stroke kills twice as many women as breast cancer does, making stroke the third leading cause of death for women. Surprised? You’re not alone. Many women do not know their risk of having a stroke.

Stroke kills about twice as many women as breast cancer each year. In fact, stroke is the third leading cause of death for women. Stroke also kills more women than men each year. A stroke can leave you permanently disabled. But many strokes are preventable and treatable. Every woman can take steps to prevent stroke by knowing her risk factors and making healthy changes.