Where in health am I? : Home / Health Cloud / Challenges / Allergies / Environmental Allergies

Allergies are not simply a biological blunder. Instead, they’re an essential defense against noxious chemicals - Ruslan Medzhitov 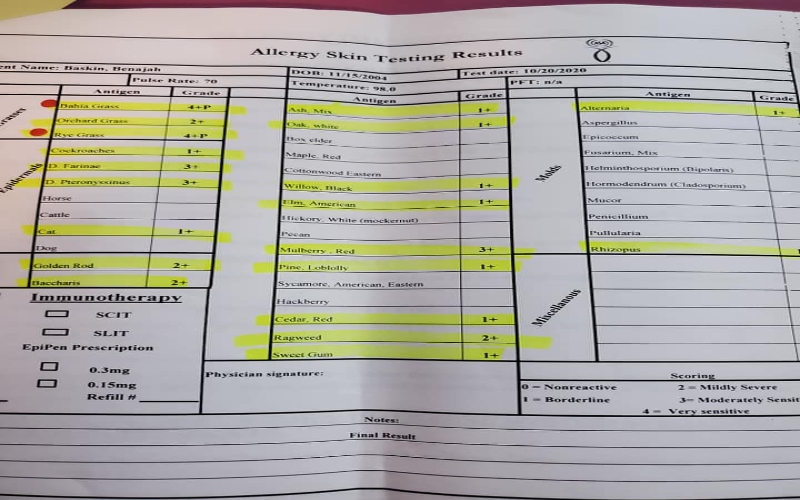 Anyone with an allergy has their origin story, a tale of how they discovered that their immune system goes haywire when some arbitrarily particular molecule gets into their body. There are hundreds of millions of these stories. In the US alone, an estimated 18 million people suffer from hay fever, and food allergies affect millions of American children. The prevalence of allergies in many other countries is rising. The list of allergens includes — but is not limited to — latex, gold, pollen (ragweed, cockleweed and pigweed are especially bad), penicillin, insect venom, peanuts, papayas, jellyfish stings, perfume, eggs, the feces of house mites, pecans, salmon, beef and nickel.

Once these substances trigger an allergy, the symptoms can run the gamut from annoying to deadly. Hives appear, lips swell. Hay fever brings sniffles and stinging eyes; allergies to food can cause vomiting and diarrhea. For an unlucky minority, allergies can trigger a potentially fatal whole-body reaction known as anaphylactic shock.

Allergies usually, but not always, show up for the first time during childhood. But why do some people get allergies and others don’t? Allergies tend to run in families, so genetics may be one culprit. In fact, errors in a gene that helps regulate the immune system are associated with higher rates of allergies. The environment you grow up in matters, too. Being exposed to an allergen as a baby makes you less likely to actually develop an allergy to it. People who grow up on farms, in big families, and in the developing world also tend to have fewer allergies, although there are plenty of exceptions, partly thanks to genetics. The idea is that as children, they encounter more of the microbes and parasites that co-evolved with traditional hunter-gatherer societies, and that an immune system toughened up by a barrage of pathogens is less likely to overreact to allergens.

For allergy sufferers, the current treatment options are limited: antihistamines can stop the inflammation response, steroids can help dial down the immune system, and EpiPens can save lives. A more permanent option is immunotherapy. Deliberate, controlled exposure to gradually increasing amounts of an allergen can teach the immune system that it isn’t dangerous after all.

There might be more effective treatments if scientists understood allergies, but a maddening web of causes underlies allergic reactions. Cells are aroused, chemicals released, signals relayed. Scientists have only partially mapped the process. And there’s an even bigger mystery underlying this biochemical web: why do people get allergies at all?

The hygiene hypothesis proposes that our immune system overreacts to harmless substances because there aren’t enough harmful ones around to train it to discriminate. But the question remains of why some things (pollen, a bee sting) are much more likely than others (peas, a mosquito bite) to cause a severe allergic reaction. One theory is that allergens have certain proteins that resemble those found on parasitic worms (ironically, the very same type of creature that can be used to treat allergies.) When our immune system recognizes a parasitic worm, it produces the same type of antibodies that respond to allergens—antibodies which are actually fairly unusual. However, a competing theory suggests that these “harmless” substances actually aren’t: that we respond to allergens not because they remind our immune systems of parasitic worms, but because they actually physically damage our cells, shredding them to pieces. In this model, allergies are the first line of defense against toxic molecules, which our ancestors likely encountered in their environment much more often than we do today...

Your Environment Is Cleaner. Your Immune System Has Never Been So Unprepared.

A century ago, British scientists suggested a link between increased hygiene and allergic conditions — the first hint that our immune systems are becoming improperly “trained.”

How our environment can induce allergies even before we’re born

If chemical exposures and resulting changes in DNA methylation patterns can be detected early in life, strategies to prevent chemical exposures or the risk to get allergy (or both), particularly in children, could be developed at various levels such as reviewing legislation on air pollution limits or aiming at a better education of prospective parents.

Will an Air Purifier Actually Help With Allergies?

The air in your home can be even nastier than the air outside.

How to Minimize Allergies in Your Home

If you have terrible seasonal and indoor allergies, here’s how to minimize them when you’re indoors.

The impact of climate change can be felt all across the globe with rising temperatures, longer allergy seasons and deteriorating air quality leading to stronger airborne pollutants and increased allergy symptoms.

There has never been a better business (or planetary) climate in which to calm and stoke your anxieties about dirty air.

Preventing allergy symptoms is better than having to treat them. Things like keeping windows closed, filtering the air, and not having too many indoor plants can make a difference.

Here's why there aren't better treatments for your allergies

I have terrible, awful, allergies to a whole bunch of things, from dust mites to apples to chlorine. And my list is only dwarfed by the number treatments I've tried over the years. I load up on over-the-counter antihistamines like Zyrtec and Claritin and get shots once a week, but it's still not enough.

Is your home harming you? Asthma, allergies and indoor mould

It is hard to escape indoor mould. It is most commonly found in the wet areas of the home, especially the bathroom and the kitchen, but it can grow anywhere. We all agree that it’s unsightly, but the bigger problem is it can harm your lungs.

Why Do Some People Develop Allergies as Adults?

Dr. Sublett says many factors can trigger the onset of allergies in adults, including high levels of pollution exposure, moving to a home that has mold, adopting a pet or working in a setting where lots of allergens are present. Hormonal changes that come with pregnancy and menopause can also bring on allergies, he says. And in the process of aging, the body's immune system might become more sensitized, which can bring on allergies, he says.

Why Do People Get Allergies?

Anyone with an allergy has their origin story, a tale of how they discovered that their immune system goes haywire when some arbitrarily particular molecule gets into their body. There are hundreds of millions of these stories.

5 Environmental Allergies (and how to manage them)

So, without further ado, we bring you five environmental allergies (and how to manage them) with help from Dr. Michael Wein, an allergist-immunologist in Port Saint Lucie, Florida, who is a professor at Florida State University College of Medicine and is affiliated with multiple hospitals in the area.