Where in health am I? : Home / Health Cloud / Challenges / Autoimmune Conditions

In fact, autoimmune disease is as much of a medical frontier today as syphilis or tuberculosis was in the nineteenth century - Meghan O'Rourke 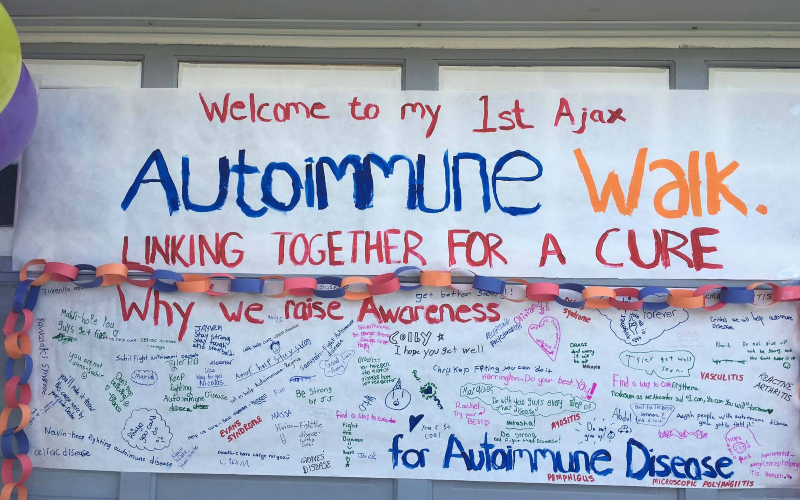 Today, researchers believe that they have discovered some eighty to a hundred autoimmune disorders, including disorders as various as lupus, multiple sclerosis, type 1 diabetes, and rheumatoid arthritis. But exact numbers are hard to come by, because researchers still don’t agree on how to define an autoimmune disease, and find it hard to come up with objective measures.

Even the term “autoimmune disease” may be imprecise: we don’t know in every case whether autoimmune dysfunction is the cause of the disease, rather than, say, a consequence. Then there’s the complexity of the immune system. Thyroid patients tend to be preoccupied with antibodies, but Rose, who now runs the Center for Autoimmune Disease Research at Johns Hopkins, notes that one culprit in Hashimoto’s might be the T-lymphocyte—you could have a low antibody count and still be quite sick, or a high antibody count and feel fine. All this uncertainty adds to the shadowiness of the experience.

In fact, autoimmune disease is as much of a medical frontier today as syphilis or tuberculosis was in the nineteenth century. And yet some researchers say that the number of cases is rising at almost epidemic rates. The American Autoimmune Related Diseases Association (AARDA) estimates that as many as fifty million Americans suffer from autoimmunity, which makes it one of the most prevalent categories of disease, ahead of cancer. It is a leading cause of illness in young women. (Three-quarters of autoimmune patients are women.)

Some researchers—devotees of “bored immune system” theory—ascribe the rise to our newly hygienic world: with too little to do, our immune system turns on itself. Others think it’s the opposite problem: our immune system is overstimulated by the chemicals and toxins in our environment, confusing those molecules with molecules native to the body. The explanation could involve both, or neither.

My experience of feeling unwell for years before I got a diagnosis turned out to be typical. According to AARDA, it takes an average of nearly five years (and five doctors) for a sufferer to be given a diagnosis. Patients can end up consulting different specialists for different symptoms: a dermatologist, an endocrinologist, an immunologist, a neurologist, a rheumatologist.

A lot of people with autoimmune diseases would like to see the establishment of clinical autoimmune centers, where a single doctor would coördinate and oversee a patient’s care, as at a cancer center. (Israel now has one, the first of its kind.) Virginia Ladd, the president and executive director of AARDA, told me that funding is a problem: donors tend to give to specific diseases, and, because few people understand the connection between M.S. and ulcerative colitis and Hashimoto’s, no one gives to “autoimmunity” as a category. (Eighty-five per cent of Americans can’t name an autoimmune disease.) As it is, many clinicians assume that the patient, who is often a young woman, is just one of the “worried well”...

Worrying about being crazy is part of many autoimmune sufferers’ lives. Even after diagnosis, you’re often trapped in an epistemological maze, not least because autoimmune diseases tend to overlap. Besides, if the experience of autoimmunity is not just in your head, it is also not just in your body. Nortin Hadler, a professor of rheumatology at U.N.C.-Chapel Hill, talks about the consequences of “negative labelling”: when you give patients a diagnosis, they tend to feel sicker than they did without one. Focusing on symptoms, some studies suggest, can make them seem more severe.

And so the person suffering from chronic illness faces a difficult balancing act. You have to be an advocate for yourself in the face of medical ignorance, indifference, arrogance, and a lack of training. (A 2004 Johns Hopkins study found that nearly two-thirds of doctors surveyed felt inadequately trained in the care of the chronically ill.) You can’t be deterred when you know something’s wrong. But you’ve also got to be willing to ask how much is in your head—and whether an obsessive attention to your symptoms is going to lead you to better health. The chronically ill patient has to hold in mind two contradictory modes: insistence on the reality of her disease, and resistance to her own catastrophic fears...

There are still moments when I mourn my old robust state of health. I look at the photograph by my desk, and remember playing in the sun on summer vacation. I remember getting up early during those long months with the feeling that, like the boy in Robert Lowell’s poem “Waking Early Sunday Morning,” I sat “like a dragon on / time’s hoard.” I remember going downstairs before anyone had woken to sit with my book and a bowl of cereal. Later, the dog and I would go out for a walk up the dirt road by our cabin, under the tall New England sugar maples. I’d throw the tennis ball for him, feeling the wet-cool dirt and gravel under my bare feet.

An autoimmune-like antibody response is linked with severe COVID-19

A harrowing turn in the COVID-19 pandemic occurred with the realization that the immune system’s power in fighting infection was sometimes pyrrhic. In patients with severe COVID-19 infections, evidence emerged that the inflammatory process used to fight the SARS-CoV-2 virus were, in addition to fighting the virus, potentially responsible for harming the patient.

Evolution might have played a trick on women’s immune systems.

Having an Autoimmune Disease Makes Me Feel 50 Years Older

A night out for me usually means a week spent recovering from that very night out.

3 Things That Wreck Your Hormones

When it comes to your hormones, there are many ways diseases can screw things up. By far, the most common is when the immune system attacks your hormone-producing glands. This is called autoimmune disease.

7 Things You Should Know About Autoimmune Diseases

As if living with chronic illness wasn't challenging enough, living with an autoimmune disease can be even more difficult. Still highly misunderstood by medical professionals and the public alike, autoimmune diseases are characterized by nebulous symptoms that can make diagnoses difficult to come by. Treatments vary, and in some cases rely entirely on behavior changes.

A big list of The Best Autoimmune Disorder Blogs

The thing about Autoimmune disorders is that people rarely have just one. We are making a huge list of great Autoimmune Blogs for those of us who are blessed with more than one Autoimmune Disorder.

Autoimmunity Is From Venus

Why do women have more problems like Sjögren's syndrome and lupus?

Before He Died, Paul Allen Gifted $125 Million To A New Institute To Study The Immune System

Competition Heats Up in Rheumatoid Arthritis and Other Autoimmune Conditions

With the wide variety of treatment options currently available and more in the pipeline, payers are faced with the challenge of identifying the most clinically and economically effective allocation of treatments for RA.

Explainer: what are autoimmune diseases?

Autoimmune diseases, which include a range of around 80 different illnesses from rheumatoid arthritis to type 1 diabetes and multiple sclerosis, occur when the immune system attacks the body.

How to Stop Attacking Yourself: 9 Steps to Heal Autoimmune Disease

It you want to cool off inflammation in the body, you must find the source. Treat the fire, not the smoke. In medicine we are mostly taught to diagnose disease by symptoms, NOT by their underlying cause. Functional medicine, the emerging 21st paradigm of systems medicine teaches us to treat the cause, not only the symptoms, to ask the question WHY are you sick, not only WHAT disease do you have.

How to Stop Attacking Yourself: 9 Steps to Treating Autoimmune Disease

Autoimmune diseases now affect 24 million people and include rheumatoid arthritis, lupus, multiple sclerosis, thyroid disease, inflammatory bowel disease and more. These are often addressed by powerful immune suppressing medication and not by addressing the cause. That’s like taking a lot of aspirin while you are standing on a tack. The treatment is not more aspirin or a strong immune suppressant but removing the tack.

Scientists are trying to treat autoimmune disease with intestinal worms

“Worm therapy” has a mixed record in clinical trials.

The Autoimmune Protocol (AIP) is a diet used to heal autoimmune disease and inflammatory disease. From my research I’ve read that this diet helps heal leaky gut and allows the digestive tract to heal and recover from damage and assaults from certain foods.

We Might Have Finally Found The Trigger For Autoimmune Diseases

The problem comes when the body incorrectly identifies a normal protein as a threat. When that happens, the B cell selection process produces what are known as autoantibodies that prove very effective at harming our own bodies.

Why Your Immune System Doesn't Eat You Alive

Contrary to conventional wisdom, T cells that cause autoimmune disease actually abound in the body but are held in check.

Your Immune System Is Made, Not Born

New research dispels the belief that the strength of the body’s defense system is genetically programmed.

What’s Wrong with Me?

I had an autoimmune disease. Then the disease had me.

The American Autoimmune Related Diseases Association is dedicated to the eradication of autoimmune diseases and the alleviation of suffering and the socioeconomic impact of autoimmunity through fostering and facilitating collaboration in the areas of education, public awareness, research, and patient services in an effective, ethical and efficient manner.

Autoimmune diseases affect as many as 1 in 5 people living in the United States. That’s more than 50 million individuals. Our alliance is a community of patients, family members, advocacy groups and healthcare professionals dedicated to a common cause — raise awareness, educate the public, and advocate for those in need. We are the Autoimmune Advocacy Alliance.

The Autoimmune Encephalitis Alliance promotes collaboration to improve care, find a cure and create community so that no one faces autoimmune encephalitis alone.

AutoimmuneMom.com was born out of a frustration with a lack of online information about autoimmune conditions beyond the surface-level articles and blog posts, even on the top health websites. Believing there must be a way to develop content that dug into current research and examined deeper questions, the planning for the site began.

Patients are no longer waiting for current medical practice to catch up with today’s understandings in metagenomics and microbiology. They are looking for ways to take steps to recover now, not two decades from now.

Our mission is to support the IG community through education, communication and advocacy.

Life in the Autoimmune Lane

With this blog I hope to accomplish a couple of things. One is the therapeutic aspect of getting it all out so it’s not jumbling around in my mind driving me crazy, and two, if anyone out there is battling an autoimmune disease they can know that they’re not alone. All of your fears and frustrations I share.

The PBCers Organization is a wonderful source of education and support for those who suffer from Primary Biliary Cirrhosis and other autoimmune liver diseases.

There are more than 80 types of autoimmune diseases, and some have similar symptoms. This makes it hard for your health care provider to know if you really have one of these diseases, and if so, which one. Getting a diagnosis can be frustrating and stressful. Often, the first symptoms are fatigue, muscle aches and a low fever. The classic sign of an autoimmune disease is inflammation, which can cause redness, heat, pain and swelling.