Where in health am I? : Home / Health Cloud / Challenges / Blood / Anemia 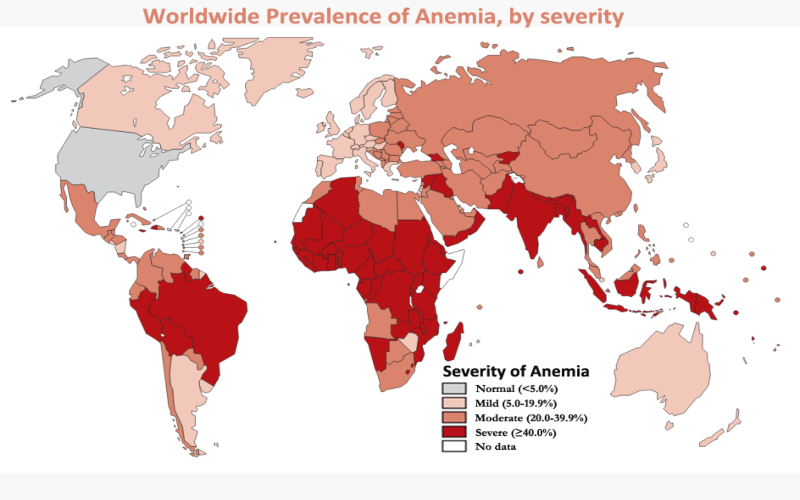 How having anemia could actually be a good thing

Affecting primarily women of child-bearing age, teenagers and young children. anemia is probably the most common nutritional problem in the world resulting in a signifigant cost to society. According to WHO, pregnant women and children are particularly vulnerable with anemia contributing to 20% of all deaths during pregnancy.

But..."If you've got anemia, that might be good news.

Does such a statement sound weird to you? That's to be expected: For years we've been told that anemia and iron deficiency are nothing short of evil. They should be treated as soon as possible, with any means possible: hence the 108-milligram iron pills sold in many pharmacies.

Why an iron fish can make you stronger

When Canadian science graduate Christopher Charles visited Cambodia six years ago he discovered that anaemia was a huge public health problem...Dr Charles had a novel idea. Inspired by previous research which showed that cooking in cast iron pots increased the iron content of food, he decided to put a lump of iron into the cooking pot, made from melted-down metal.

Anemia: Know the Symptoms of This Potentially Life-Threatening Condition

Rarely is anemia related to iron deficiency in pets, as it is in many women. Iron supplementation should be avoided, unless your pet is one of the very rare cases where actual iron deficiency is present.

Anemia: Know the Symptoms of This Potentially Life-Threatening Condition

Anemia: What’s Really Going On and Why We Should Think Twice About Iron Supplements

Let's talk about anemia, iron, and iron supplements. There's a lot more to this issue than meets the eye. I know a lot of doctors automatically prescribe iron for anemia, but the situation is much more complex than that, and there are indeed cases where supplemental iron can even make matters worse. Indeed, one of the first places we should look in the presence of anemia is the gut. Let's see why.

How Selfies Could Detect a Common Deadly Disease

More than half of the cases of anaemia are caused by low iron levels and can be treated with iron supplements, according to global health experts. But easy-to-use, reliable, and cheap methods to detect anaemia and monitor the effects of treatment are still needed.

The Many Varieties of Anemia

“Anemic” is one of those words that has broken away from the strictly medical lexicon and into the mainstream vocabulary. In the Wall Street Journal or The New York Times it means “weak” or “faint,” but in The Merck Manual or The Physicians' Desk Reference, it refers to the world's most common blood disorder that affects about a quarter of the planet's population.

Nearly half a billion people on the planet -- around one out of every fifteen individuals -- are afflicted with a condition that is largely unknown in the popular consciousness.

Your Guide to Anemia

People of all ages, races, and ethnicities can develop anemia at some point in their lives. There are many types of anemia, and they are linked to a variety of diseases and conditions. Some types of anemia are very common, and some are very rare.

How having anemia could actually be a good thing

If you've got anemia, that might be good news. Does such a statement sound weird to you? That's to be expected: For years we've been told that anemia and iron deficiency are nothing short of evil. They should be treated as soon as possible, with any means possible: hence the 108-milligram iron pills sold in many pharmacies.

The Diamond Blackfan Anemia Foundation, Inc. (DBAF), founded in 1994, has adopted the following mission statement: “to advance research initiatives that promote a better understanding, therapeutic strategies and a cure for this rare bone marrow failure syndrome.

Our mission is to find effective treatments and a cure for Fanconi anemia and to provide education and support services to affected families worldwide.

Many people are at risk for anemia because of poor diet, intestinal disorders, chronic diseases, infections, and other conditions. Women who are menstruating or pregnant and people with chronic medical conditions are most at risk for this disease. The risk of anemia increases as people grow older. People who engage in vigorous athletic activities, such as jogging or basketball, may develop anemia as a result of red blood cells breaking down in the bloodstream.

There are many forms of anemia, each with its own cause. Loss of blood is the most common cause of anemia. Anemia can be temporary or long term, and it can range from mild to severe. Treatments for anemia range from taking supplements to undergoing medical procedures. You may be able to prevent some types of anemia by eating a healthy, varied diet.

If you have anemia, your blood does not carry enough oxygen to the rest of your body. The most common cause of anemia is not having enough iron. Your body needs iron to make hemoglobin. Hemoglobin is an iron-rich protein that gives the red color to blood. It carries oxygen from the lungs to the rest of the body. Anemia has three main causes: blood loss, lack of red blood cell production, and high rates of red blood cell destruction.

Lack of iron is the most common cause of anaemia in the UK. This is called iron-deficiency anaemia. There are many other causes of anaemia. These include the following: Lack of certain vitamins such as folic acid and vitamin B12. Red blood cell problems such as thalassaemia, sickle cell anaemia and other causes of haemolytic anaemia. In these conditions the red cells are fragile and break easily in the bloodstream. Bone marrow problems and leukaemia are uncommon, but can cause anaemia. Other conditions such as rheumatoid arthritis and chronic kidney disease can also cause anaemia.

Anaemia is a condition in which the number of red blood cells or their oxygen-carrying capacity is insufficient to meet physiologic needs, which vary by age, sex, altitude, smoking, and pregnancy status. Iron deficiency is thought to be the most common cause of anaemia globally, although other conditions, such as folate, vitamin B12 and vitamin A deficiencies, chronic inflammation, parasitic infections, and inherited disorders can all cause anaemia. In its severe form, it is associated with fatigue, weakness, dizziness and drowsiness. Pregnant women and children are particularly vulnerable.