Where in health am I? : Home / Health Cloud / Challenges / Blood / G6PD Deficiency

We learn by our problems. We correct our deficiencies if there are any - Joe Arpaio 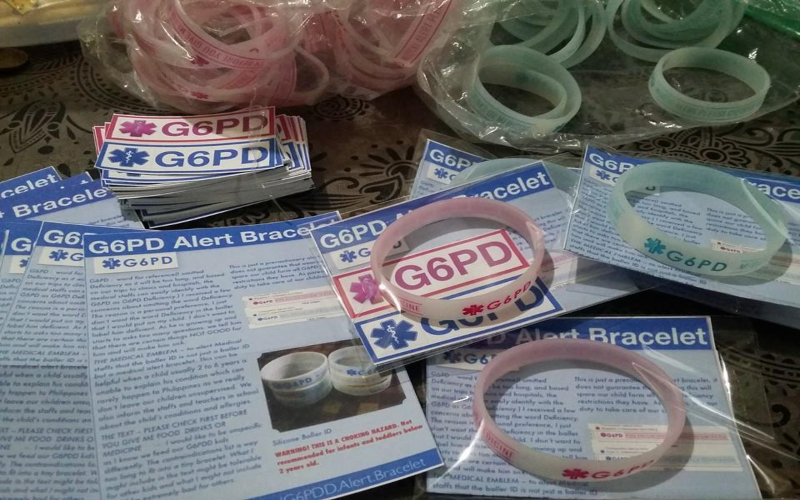 Nearly half a billion people on the planet -- around one out of every fifteen individuals -- are afflicted with a condition that is largely unknown in the popular consciousness. While much time, angst, energy, and wealth is spent on diseases du jour such as the swine flu, there are precious few places to find solid information about one of the world's most common and widespread afflictions. Beyond simply being a matter of health care, this situation raises profound questions about social justice and global equity that deserve consideration in the public debate about how our medical resources are best utilized.

First, a few basics: the ailment is known as G6PD…

Another blessing that this condition bring is that people found to be positive with it are living in areas endemic with Malaria. Why? Researchers have found evidence that the parasite that causes this disease does not survive well in G6PD-deficient cells. So they believe that the deficiency may have developed as a protection against malaria.

If you’re G6PD deficient, it’s not so good to uncover a fava bean. However, the complicated hidden interrelatedness of each of these things will lead to new epiphanies in malarial infections and their treatment.

Favism is a hereditary disease found worldwide but it is most prevalent in the Mediterranean. The red blood cells of individuals with favism lack G6PD, an enzyme needed to break down peptide glutathione. Since this substance is present in fava beans, the exposure to fava beans or even their pollen can trigger fevers, jaundice, hemolytic anemia and death.

Favism describes the susceptibility to, and clinical presentation of, acute haemolytic crises as a consequence of eating broad beans in a subgroup of patients with glucose-6-phosphate dehydrogenase (G6PD) deficiency. It can be potentially life-threatening. Broad beans are derived from the plant Vicia fava - hence, the condition's name. Susceptible patients may also experience the syndrome when exposed to the plant's pollen.

Nearly half a billion people on the planet -- around one out of every fifteen individuals -- are afflicted with a condition that is largely unknown in the popular consciousness.

g6pd Deficiency Foundation, Inc.’s purpose is to provide effective and enriching seminars and literature that inform the public about G6PD deficiency. Through implementation of educational seminars to the general public and medical community, we hope to encourage G6PD deficient individuals to live a healthy life.

The association offers assistance to persons affected by the G6PD enzyme deficiency and their families, including helping with the protection of patients' social rights; informing and educating affected persons and the medical community on all aspects of the deficiency; helping organize petitions calling for government actions; and more.

G6PD deficiency is an inherited condition in which the body doesn't have enough of the enzyme glucose-6-phosphate dehydrogenase, or G6PD, which helps red blood cells (RBCs) function normally. This deficiency can cause hemolytic anemia, usually after exposure to certain medications, foods, or even infections. Most people with G6PD deficiency don't have any symptoms, while others develop symptoms of anemia only after RBCs have been destroyed, a condition called hemolysis. In these cases, the symptoms disappear once the cause, or trigger, is removed. In rare cases, G6PD deficiency leads to chronic anemia.

Factors such as infections, certain drugs, or ingesting fava beans can increase the levels of reactive oxygen species, causing red blood cells to be destroyed faster than the body can replace them. A reduction in the amount of red blood cells causes the signs and symptoms of hemolytic anemia.

You are more likely to develop this condition if you: •Are African American •Are of Middle Eastern decent, particularly Kurdish or Sephardic Jewish •Are male •Have a family history of the deficiency

The enzyme glucose-6-phosphate dehydrogenase (G6PD) is one of the enzymes of the pentose phosphate pathway. This pathway is involved in keeping an adequate amount of the coenzyme nicotinamide adenine dinucleotide phosphate (NADPH) in cells. NADPH in turn maintains the levels of glutathione which protects the red cell from oxidative damage. G6PD is the rate-limiting enzyme in the pentose phosphate pathway. Thus, deficiency of the G6PD enzyme results in reduced glutathione making the red cells vulnerable to oxidative damage and thus liable to haemolysis.