Where in health am I? : Home / Health Cloud / Challenges / Blood / Blood Transfusions

The safest blood transfusion is the one not given - Tim Goodnough 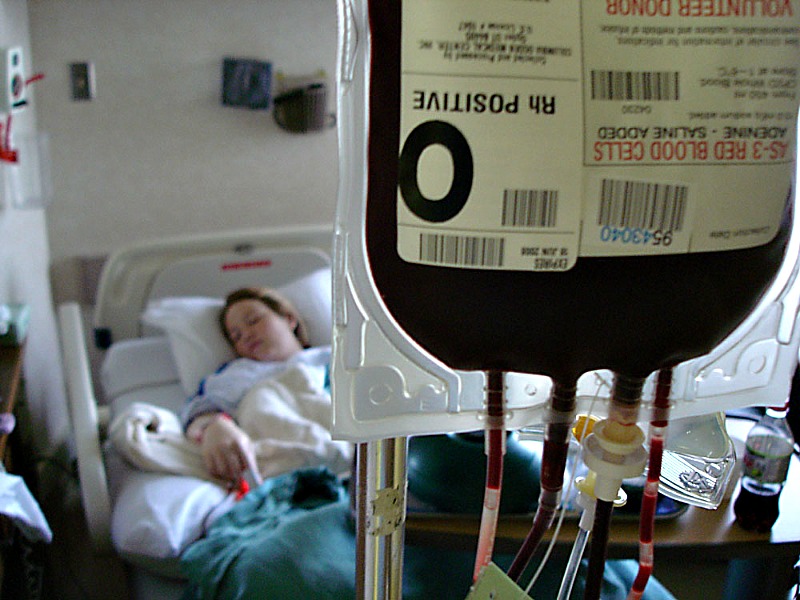 Evidence-based medicine: Save blood, save lives

Transfusions are common procedures, at least in developed nations. In 2011, US doctors transfused 21 million units of blood and blood products; in the United Kingdom, the number was nearly 3 million. But although transfusions can be lifesaving, they are often unnecessary and are sometimes even harmful. “I think we were kind of brainwashed into thinking that blood saves lives, and the more you give the better,” says Steven Frank, an anaesthesiologist and director of the blood-management programme at the Johns Hopkins Health System in Baltimore, Maryland. “We've gone 180 degrees, and now we think that less is more.”

From animal experiments to saving lives: a history of blood transfusions

Here we look at how blood transfusions started as an experiment four centuries ago, and became a modern-day life saver.

Hospitals Around The World Have A Dire Shortage Of Blood

Blood has long been a rare commodity across much of Africa, Tagny says, both because there's a lack of public awareness about the need for non-emergency donations — blood drives at college campuses, churches or community centers are infrequent — and a lack of cold-storage facilities to keep and distribute what little blood is available, particularly in rural clinics, where the blood supply is even more limited than in urban hospital settings.

It's Safe To Donate Blood During The Coronavirus Pandemic. Hospitals Wish You Would

Questioning ‘the Newer the Better’ for Blood Transfusions

Fresh blood transfusions may be no better than blood that has been stored for several weeks, a new study found.

The world’s first experiments with blood transfusion occurred in the mid-1660s in England. The procedure, which was first carried out between dogs, was gruesome:

By splicing animals together, scientists have shown that young blood rejuvenates old tissues. Now, they are testing whether it works for humans.

Because transfusions carry risks and because the blood supply is limited, doctors try not to transfuse if they can avoid it. In some cases, options other than blood product transfusions may be available.

An Alternative To Blood Transfusions For Resource-Strapped Developing Countries

Take something as seemingly commonplace as a blood transfusion for a patient who is hemorrhaging. In places like Sub-Saharan Africa, where there aren’t facilities for safe storage or testing of donated blood, medical professionals often salvage the patient’s own blood with a kitchen soup ladle and filter it with gauze. The result: many unnecessary deaths.

Artificial blood 'will be manufactured in factories'

The new mix, known as 1-1-1 for its balanced blood product ratios, more effectively combats the impact of blood loss and uncontrolled bleeding, the researchers reported.

Cutting the Risk of Tainted Platelets

According to a CDC report, most blood-collection centers culture only apheresis platelets and release the unit after culture. Hospital transfusion services are responsible for bacterial testing of platelets derived from donated whole blood. Because pooling is performed immediately before transfusion, culture-based tests are logistically difficult and costly to implement for whole-blood-derived platelets, the report says.

The most common medical procedure performed for patients hospitalized in the US in 2011 was a blood transfusion But evidence is mounting that a substantial portion of blood transfusions are not necessary. That means some patients are taking on risks and costs for a procedure that isn't really helping them.

Here are some techniques medical professionals employ when faced with a Jehovah's Witness patient who refuses a transfusion when he or she is in dire need of one.

Medicine, Murder And The History of Transfusion

In her new book "Blood Work: A Tale of Medicine and Murder in the Scientific Revolution, Vanderbilt University professor Holly Tucker tells the sometimes gory history of blood transfusions, a practice that she says began before doctors knew anything about blood types or immunology.

Shining a Light on the Safety of Blood Transfusions

Kuehnert says the U.S. is one of the only developed countries not to have a national transfusion reporting and safety system.

The Rising Risk of a Contaminated Blood Supply

Amid new pathogens and cost pressures, efforts are under way to keep patients safe.

Your Blood Type is a Lot More Complicated Than You Think

Evidence-based medicine: Save blood, save lives

Transfusions are one of the most overused treatments in modern medicine, at a cost of billions of dollars. Researchers are working out how to cut back.

This website has been developed by the Blood Service’s Transfusion Practice and Education (TPE) team as a resource for patients who may need a blood transfusion. It aims to encourage discussion between a patient and a doctor about best transfusion care.

This website was specially developed as a vehicle for Canadian Blood Services educational tools and a trustworthy source of resources for professionals involved in transfusion medicine.

Type O blood is safe for almost everyone. About 40 percent the population has type O blood. People with this blood type are called universal donors. Type O blood is used for emergencies when there's no time to test a person's blood type.

The International Society of Blood Transfusion (ISBT) is a scientific society that was founded in 1935. Since that time the ISBT has grown in to an international society where transfusion medicine professionals from across the globe come together and do the one thing they do best: share knowledge to improve the safety of blood transfusion worldwide.

Type O blood is safe for almost everyone. About 40 percent of the population has type O blood. People who have this blood type are called universal donors. Type O blood is used for emergencies when there's no time to test a person's blood type.

Blood transfusions are generally considered to be safe. But they do carry some risk of complications. Complications may happen during the transfusion or not for weeks, months or even years afterward.

Transfusion of your own blood (autologous) is the safest method but requires planning ahead and not all patients are eligible. It is usually only an option for elective surgery.

Most blood transfusions go very smoothly. Some infectious agents, such as HIV, can survive in blood and infect the person receiving the blood transfusion. To keep blood safe, blood banks carefully screen donated blood. The risk of catching a virus from a blood transfusion is low.

Blood transfusions save lives every day. Hospitals use blood transfusions to help people who are injured, having surgery, getting cancer treatments, or being treated for other diseases that affect the blood, like sickle cell anemia.

The World Health Organization has been at the forefront of the movement to improve global blood safety since 1975 as mandated by successive World Health Assembly resolutions.