Where in health am I? : Home / Health Cloud / Challenges / Blood / Von Willebrand Disease

A mind can bleed a heart to death - Munia Khan 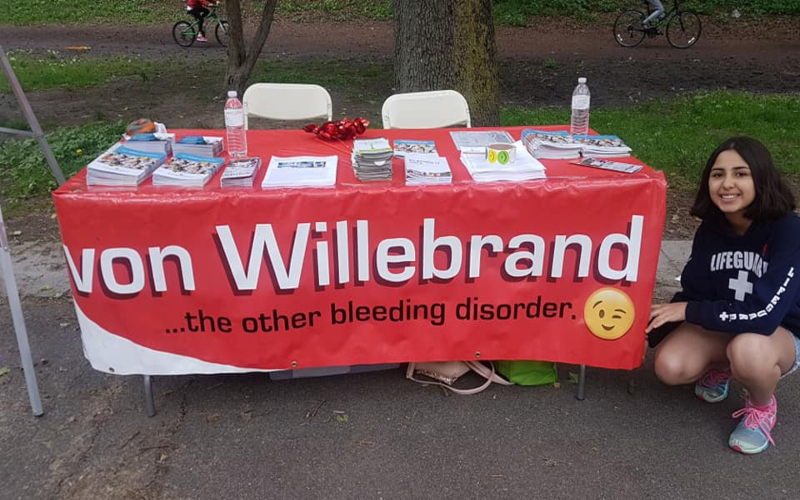 Better Than Before: A Hypochondriac Discovers von Willebrand Disease

The worst thing you can tell a hypochondriac such as myself, is that there is another illness out there waiting to be experienced. Case in point: The little-known bleeding disorder, von Willebrand Disease (vWD). While it sounds like something you can only catch from effete German aristocrats, it is, in fact, named after Erik Adolf von Willebrand, a Finnish pediatrician who first discovered it in 1926.

And the only reason I am writing about it now, is that it turns out that I know someone who actually suffers from it, and she recently described her symptoms to me. (Note: When innocents start doing this and my husband, The Lawyer, is present, he desperately, tries to stop them before…

A workup for von Willebrand disease (VWD) initially involves evaluation of von Willebrand factor (VWF) quantity and function and factor VIII (FVIII) activity. Specific laboratory tests include VWF antigen, VWF ristocetin cofactor (VWF:RCo) activity (or another activity assay), and FVIII activity tests. The National Heart, Lung, and Blood Institute (NHLBI) and American Society of Hematology (ASH) guidelines designate levels of either VWF antigen or VWF:RCo <30 IU/dL (30% of normal) as diagnostic for VWD, regardless of bleeding, and a level of <50 IU/dL with abnormal bleeding as confirmatory for the diagnosis of VWD.

Advances in the diagnosis and treatment of Von Willebrand disease

VWD is of course not the only cause of mucosal bleeding. Acquired VWD, platelet-type VWD, platelet function defects, vascular malformations such as hereditary hemorrhagic telangiectasias, and connective tissue disorders must be considered in the differential diagnosis.

Dangers of a little-known clotting disorder

MOST people know of the inherited bleeding disorder hemophilia. But von Willebrand's disease, a far more common clotting disorder, is little known. Hemophilia afflicts one man in 10,000, but von Willebrand's may affect as many as one in 100 men and women, often causing frequent nosebleeds, bleeding gums, easy bruising and excessive menstrual flow. Unlike hemophilia, it is not usually life-threatening.

Developments in the diagnostic procedures for von Willebrand disease

Von Willebrand disease (VWD) is the most common inherited bleeding disorder but its diagnosis can be challenging due to the heterogeneity of the disease. VWD is mainly associated with mild mucocutaneous bleeding, although there are more severe phenotypes with bleeding from the gastrointestinal tract or even the joints. Also, surgical interventions and trauma may lead to critical bleeding events. These bleeding episodes are all related to quantitative or qualitative defects of von Willebrand factor (VWF), a multimeric glycoprotein produced by endothelial cells and megakaryocytes,

Iron Butterfly: Von Willebrand disease and a mother’s memories of her daughter

Von Willebrand disease and a mother’s memories of her daughter.

My Baby Brought Me Joy and a Life-Altering Diagnosis

Despite the condition's prevalence, the five common signs and symptoms go unnoticed or misdiagnosed.

Understanding von Willebrand Disease: Do You Know the Signs?

Early diagnosis of VWD is important to ensure that you receive proper treatment and continue to live an active and fulfilling life. However, VWD can be tricky to diagnose.

Because the symptoms can be mild, many people never realized they had an actual disease all their lives. They thought their symptoms were just something they had to live with. (Incidentally, people with VWD often outgrow the nosebleeds by adulthood, but they still have the disease even without this symptom present.)

Better Than Before: A Hypochondriac Discovers von Willebrand Disease

The worst thing you can tell a hypochondriac such as myself, is that there is another illness out there waiting to be experienced. Case in point: The little-known bleeding disorder, von Willebrand Disease (vWD).

Our mission is to provide a safe place for anyone affected by Von Willebrand's Disease to connect with others.

Welcome to Von Willebrand & U! This page provides essential information about von Willebrand disease (VWD), and is dedicated to the VWD community.

Von Willebrand's Disease is a genetic bleeding condition. Life becomes a challenge for girls and women with Von willebrand's disease. Survival remains a big question. VWD has become my identity to some extent. It has also given me opportunity to discover my inner self and understand the reason of my survival on this alluring planet - Earth.

Stimate Nasal Spray stimulates von Willebrand factor and factor VIII. Most commonly prescribed for those with type 1 VWD or mild hemophilia A, DDAVP works by stimulating release of both VWF and factor VIII found in storage sites lining the blood vessels.

Humate-P is a VWF/FVIII replacement therapy that delivers results, patient after patient, treatment after treatment, decade after decade

To maintain hemostasis or to stop bleeding in Hemophilia A and mild-to-moderate Type I von Willebrand Disease (VWD), each with Factor VIII levels >5%.

VWD is more common and usually milder than hemophilia. In fact, VWD is the most common inherited bleeding disorder. It occurs in about 1 out of every 100 to 1,000 people. VWD affects both males and females, while hemophilia mainly affects males.

Von Willebrand disease (VWD) is an under-diagnosed blood disorder in which the blood does not clot properly. It occurs with equal frequency among men and women. Although there is no cure for VWD, treatment can control symptoms and help people avoid problems.

VWD is the most common bleeding disorder, affecting up to 1% of the US population. It is carried on chromosome 12 and occurs equally in men and women.

Three main treatments are available to either prevent or treat bleeding: •desmopressin – available as a nasal spray or injection •tranexamic acid – available as tablets, a mouthwash or an injection •Von Willebrand factor concentrate – this is purified from human plasma (from donated blood) and is given directly into a vein.

I have just been diagnosed with Von Willebrand's disease (because one rare genetic illness isn't enough for me apparently) and I'm hoping my story might help others.

Von Willebrand disease (VWD) is a common inherited bleeding disorder in the general population affecting males and females equally, but women may be disproportionately impacted due to the bleeding challenges of menstruation and childbirth.

This is the most common hereditary coagulopathy in humans. It can be congenital or acquired. It was described in 1926 by Erik von Willebrand in inhabitants of the Aland Islands in the Sea of Bothnia between Sweden and Finland. It was called 'pseudohemophilia' but later became known as vascular haemophilia.