Where in health am I? : Home / Health Cloud / Challenges / Infections / Bacteria / Diphtheria 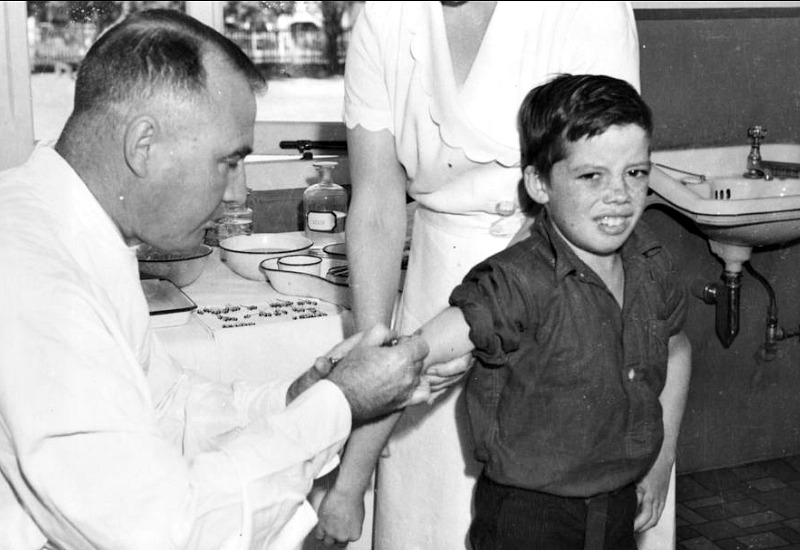 image by: The Courier Mail

Until the late 19th century, diphtheria was a gruesome killer with no known cause and many ineffective treatments. In 1874, The New-York Times printed an advertisement for a medicine that would cure not only diphtheria, but also corns, bunions and “pains in the loins and back.” The same year, a news article began, “There has been spreading for some time an idea or hypothesis among the more philosophic medical men, and among the thoughtful ‘laity,’ that many species of disease have their sources in, and are scattered by, seeds or germs.”

"A death that will haunt me for life"

The boy was battling diphtheria, the highly contagious bacterial disease that was once-eradicated in India, but has seen a recent resurgence in several Indian states. "I can't describe the agony on his face as he battled death. I cursed all the vaccine hate mongers in Kerala a 1000 times in my mind as I was looking at him, my helplessness hid behind my (surgical) face mask," Dr Niyas wrote.

An outbreak of diphtheria in a Rohingya refugee camp in Bangladesh makes it clear that these people were living in substandard conditions before they fled Myanmar.

Efforts to Curb Diphtheria Have Stalled

Progress in decreasing the incidence of diphtheria globally have stalled, and cases have increased in recent years, according to a CDC report. The findings come from a large study of the global epidemiology of the disease from 2000 to 2017 (Emerg Infect Dis 2019;25[10]:1834-1842).

Have you had your diphtheria vaccines? Here’s why it matters

The discovery of a vaccine against diphtheria in 1923, and the development of the combination vaccine for diphtheria, tetanus and pertussis (DTP) in 1948 is one of the greatest public health stories of all times. In the early 1970s, prior to widespread immunisation, there were around one million cases of diphtheria worldwide each year.

Diphtheria: What Exactly Is It … And Why Is It Back?

In the first century, a doctor called Aretaeus of Cappadocia described the rotting smell of "Egyptian ulcers." Ancient Chinese medical literature mentions a disease called "children-killing carbuncle." In 17th century Spain there were references to an illness known as "the strangler." They were talking about diphtheria, a highly infectious respiratory disease that colonizes a person's nose and throat, creating a thick layer of dead cells that can block the airway. It has always had a reputation for sickening children. With the introduction of a highly effective vaccine in the 1920s and early '30s, diphtheria faded away in much of the world.

Long Ago Against Diphtheria, the Heroes Were Horses

Diphtheria antitoxin was one of the first of a long line of medical media sensations that have come to characterize our culture. The New York Herald organized a public fund-raising drive to support the antitoxin stable. Magazines and newspapers around the globe clamored to report on the “antitoxin horses.”

The antiserum that came out of this research would eventually rein in diphtheria, although it still appears in congested, poverty-stricken populations where sanitation is poor. For his achievement, von Behring was awarded the first Nobel Prize for Physiology or Medicine, in 1901.

We don’t hear much about diphtheria today in places like the U.S., Europe and Australia. But this disease — once virtually eliminated in wealthy countries — showed its comeback ability recently.

Until the late 19th century, diphtheria was a gruesome killer with no known cause and many ineffective treatments. In 1874, The New-York Times printed an advertisement for a medicine that would cure not only diphtheria, but also corns, bunions and “pains in the loins and back.”

Starting in the 1920s, diphtheria rates dropped quickly in the United States and other countries with the widespread use of vaccines. In the past decade, there were less than five cases of diphtheria in the United States reported to CDC. However, the disease continues to cause illness globally...In the absence of a more likely diagnosis, an upper respiratory tract illness with an adherent membrane of the nose, pharynx, tonsils, or larynx; and absence of laboratory confirmation; and lack of epidemiologic linkage to a laboratory-confirmed case of diphtheria.

The toxin, once absorbed, reaches other organs and can cause myocarditis, paralytic symptoms and nephritis. In non-vaccinated individuals, and especially if proper treatment is delayed, death can occur in up to 10% of clinical cases despite antibiotics and the use of anti-sera, Diphtheria is transmitted mainly by direct projection (droplet spread). It is preventable by vaccination.

The bacteria most commonly infects your nose and throat. The throat infection causes a gray to black, tough, fiber-like covering, which can block your airways. In some cases, diphtheria infects your skin first and causes skin lesions. Once you are infected, the bacteria make dangerous substances called toxins. The toxins spread through your bloodstream to other organs, such as the heart and brain, and cause damage. Because of widespread vaccination (immunization) of children, diphtheria is now rare in many parts of the world.

Diphtheria is highly contagious. It’s spread by coughs and sneezes, or by contact with someone with diphtheria or items belonging to them, such as bedding or clothing. The infection is usually caught after being in close or prolonged contact with someone who has the condition or is carrying the infection. For example, you may catch diphtheria from someone you live with. However, diphtheria is very rare in England because most people have been vaccinated against it. It tends to be a problem in parts of the world where fewer people are vaccinated, such as Africa, South Asia and the former Soviet Union.

This page provides links to descriptions of activities, reports, news and events, as well as contacts and cooperating partners in the various WHO programmes and offices working on this topic.