Where in health am I? : Home / Health Cloud / Challenges / Infections / Bacteria / Serratia

If you don't like bacteria, you're on the wrong planet - Stewart Brand 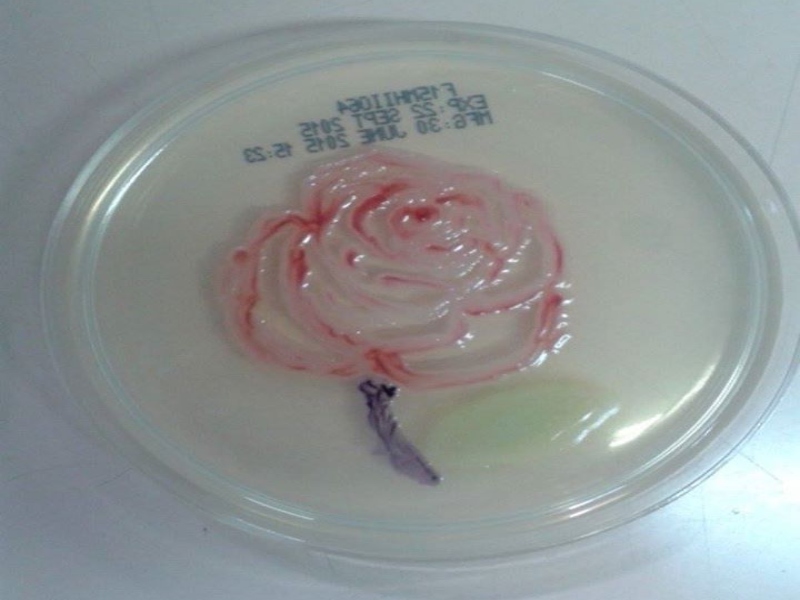 image by: American Society for Microbiology

The Killer Bacteria Hall of Fame no doubt houses the usual suspects: Yersinia pestis, perpetrator of the Plague; Treponema pallidum, the spiral-shaped culprit in syphilis; and Vibrio cholerae, the swimmer that causes cholera. But you have probably never heard of one of the inductees.

Serratia marcescens is a forgotten but ubiquitous bacterium that can produce a red pigment called prodigiosin and likes to hang out as a pink film in the shower grout and toilet bowls of less-than-scrupulously clean homes. The pigment is so persistent that giant amoebas called slime molds that dine on S. marcescens turn red just as flamingoes that eat…

Although they can’t pick up a brush, bacteria have created their own painting for the first time. Simon Park, a microbiologist at the University of Surrey, notes that many people – including Alexander Fleming – have painted with bacteria.

A hardy bacteria common on Earth was surprisingly adaptive to Mars-like low pressure, cold and carbon dioxide-rich atmosphere, a finding that has implications in the search for extraterrestrial life. The bacteria, known as Serratia liquefaciens, is found in human skin, hair and lungs, as well as in fish, aquatic systems, plant leaves and roots.

How the U.S. Government Tested Biological Warfare on America

As leaves turned red, and as San Francisco segued into the smoky autumn of 1950, Edward Nevin lay dying in a hospital bed. A rare bacteria had entered his urinary tract, made its way through his bloodstream, and clung to his heart -- a bacteria that had never been seen in the hospital’s history. Before researchers could hypothesize the bacteria's root cause, ten more patients were admitted with the same infection. Doctors were baffled: how could have this microbe presented itself?

Of Microbes and Mock Attacks: Years Ago, The Military Sprayed Germs on U.S. Cities

Between 1949 and 1969, when President Nixon ordered the Pentagon's biological weapons destroyed, open-air tests of biological agents were conducted 239 times, according to the Army's testimony in 1977 before the Senate's subcommittee on health. In 80 of those experiments, the Army said it used live bacteria that its researchers at the time thought were harmless, such as the Serratia that was showered on San Francisco.

One year ago, I had one of the worst experiences a hospital epidemiologist can have: a Serratia marcescens outbreak in a neonatal department with a total of 21 colonized or infected newborns...

What Is That Pink Slime Lurking In Your Shower? (And How Do You Clean It?)

Pink slime means one thing in the food world. But in your home, it's something entirely different -- a bacteria, to be exact. According to Melissa Maker, the owner of Clean My Space, the pink slime that forms at the bottom edge of your shower curtain is an airborne bacteria -- not a mold, as commonly thought -- technically known as Serratia marcescens.

A sinister bacterium implicated in Catholic miracles and "blood"-tainted polenta also kills coral, insects, and are even are up to no good in your contact lens case.

Once considered a harmless saprophyte, Serratia marcescens is now recognized as an important opportunistic pathogen combining a propensity for healthcare-associated infection and antimicrobial resistance.

There are recorded incidents of the U.S. military testing Serratia Marcescens on U.S. citizens in the 1950s. After the military disclosed its testing, hospitals pointed to increased pneumonia diagnosis in the subsequent weeks and months, and some deaths occurred as a result.

The choice of an agent should be based on local antimicrobial sensitivities, site of infection, cost, and comorbid conditions. Generally, the most common agents/regimens are listed first...