Where in health am I? : Home / Health Cloud / Challenges / Infections / Bacteria / Tetanus

As a child, I was more afraid of tetanus shots than, for example, Dracula - Dave Barry 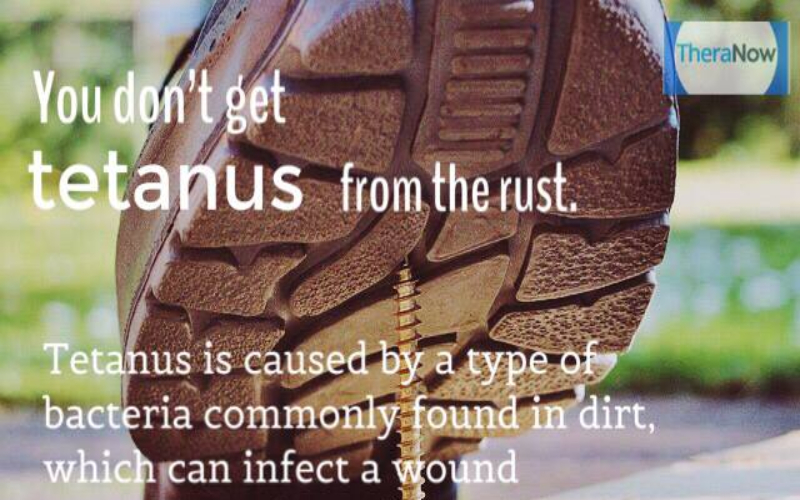 Everything you thought you knew about tetanus is wrong

The conversation in which your parents tell you to keep an eye out for rusty nails is basically a rite of passage. They tell you about the dangers of rust; explain the see something, say something protocol for things that look like they could puncture you; and foreshadow the harsh punishment for disobeying—lockjaw.

This advice certainly comes from a good place. But it’s also fundamentally wrong.

This is not to say that tetanus isn't as bad as parents promise. In North America, the Cleveland Clinic estimates, 10 percent of cases are fatal. In countries with inadequate or inaccessible medical care, the number is believed to be much higher.

Even survival takes its toll.…

An Unvaccinated Oregon Boy Got Tetanus And Spent 57 Days In The Hospital, Costing Over $800K

Hello tetanus, my old friend. Didn't Darla Shine tweet that she wanted childhood diseases back? Well, tetanus would be one of the diseases making a comeback if vaccination rates continue to drop. But as a just-released Centers for Disease Control and Prevention (CDC) report shows, tetanus is not your friend, unless you like being stiffed by friends.

How Long Do I Retain Immunity?

Antibody half-life varies tremendously, from about 11 years for tetanus to over 200 years for measles and mumps.

A Dose of Potent Advice: Don't Mess With Tetanus

Tetanus is the only vaccine-preventable disease that is infectious but not contagious -- it cannot spread from person to person -- and proper immunization against tetanus is the best defense by far. Even having the disease does not confer immunity.

Got Your Tetanus Shot? You May Not Need Another For 30 More Years

The researchers calculated the half life of tetanus immunity to be about 14 years and the half life of diphtheria immunity to be about 27 years. That means 14 years after a person’s last booster, they still have more than enough antibodies against tetanus to last them another 14 years—and enough diphtheria antibodies to last them double that time.

. Fortunately cases of it are extremely rare thanks to the tetanus vaccine, so rare that a write-up about a single case of tetanus in 2017 is now getting a lot of attention.

The Fourth of July Had a Tetanus Problem

It came to a point where "tetanus cases on the Fourth outnumbered the total number of cases during the rest of the year," a 1980 paper in the Journal of American Culture explained. Tetanus was a horrible thing to contract back then: 90 percent of those with the disease "died writhing in spasmodic contractions." The outbreaks were so consistent doctors started to call it "patriotic tetanus." Firework explosions, as it would come to be understood, are great transmitters of the disease.

Everything you thought you knew about tetanus is wrong

What’s rust got to do with it? Very little.

With The Eliminate Project, Kiwanis International and UNICEF have joined forces to eliminate maternal and neonatal tetanus. This deadly disease steals the lives of nearly 60,000 innocent babies and a significant number of women each year. The effects of the disease are excruciating — tiny newborns suffer repeated, painful convulsions and extreme sensitivity to light and touch.

Tetanus leads to death in about 1 in 10 cases. Several vaccines are used to prevent tetanus among children, adolescents, and adults including DTaP, Tdap, DT, and Td.

The disease in humans is the result of infection of a wound with the spores of the bacteria Clostridium tetani. These bacteria produce the toxin (poison) tetanospasmin, which is responsible for causing tetanus.

Tetanus immunization is part of the DTaP (diphtheria, tetanus, and acellular pertussis) vaccinations. Kids usually receive a series of four doses of DTaP vaccine before 2 years of age, followed by a booster dose at 4 to 6 years of age. After that, a booster (Tdap) is recommended at 11 to 12 years of age, or later if it was missed, followed by a tetanus and diphtheria booster every 10 years through adulthood.

Tetanus, sometimes called lockjaw, is a rare disease caused by bacteria known as Clostridium tetani. A toxin produced by the bacteria affects the function of the nerves and leads to severe muscle spasmsin the abdomen, neck, stomach, and extremities. Tetanus can either be localized to one part of the body or generalized, with muscle spasms throughout the body. The disease has been called lockjaw since the muscle spasms in the face and neck can lead to the inability to open the mouth, and this is one of the most common symptoms of tetanus. Tetanus is a serious illness that is fatal in up to 30% of cases.

A vaccine can prevent tetanus. It is given as a part of routine childhood immunization. Adults should get a tetanus shot, or booster, every 10 years. If you get a bad cut or burn, see your doctor - you may need a booster. Immediate and proper wound care can prevent tetanus infection.

Tetanus is a serious but rare infection caused by bacteria. It usually occurs when a flesh wound becomes contaminated. Without treatment, complications of tetanus are likely to develop, which can be fatal. However, vaccination and improvements in treatment mean deaths from tetanus are now rare in the UK. In England and Wales in 2011, there were only three recorded cases of tetanus.

Tetanus can be prevented by the administration of tetanus toxoid, which induces specific antitoxins. To prevent maternal and neonatal tetanus, appropriate doses of tetanus toxoid need to be given to the mother before or during pregnancy, and clean delivery and cord care practices need to be ensured.