Where in health am I? : Home / Health Cloud / Challenges / Infections / Eye / Corneal Ulcer 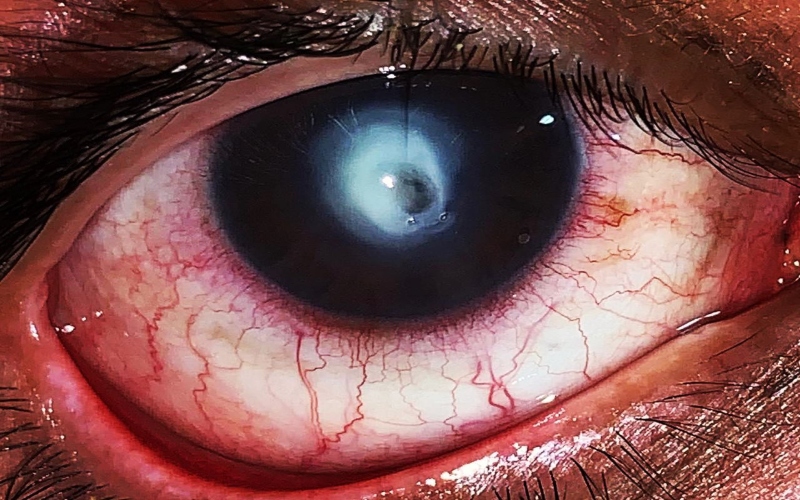 When a large corneal ulcer is staring you in the face, time is not on your side. “Despite varying etiologies and presentations, as well as dramatically different treatment approaches at times, corneal ulcers have one thing in common: the potential to cause devastating loss of vision—often rapidly,” said Sonal S. Tuli, MD, associate professor of ophthalmology, director of the cornea and external diseases service, and residency program director at the University of Florida, in Gainesville.

In the early 1990s, when broad-spectrum antibiotics became commercially available, there was a sea change in the treatment of corneal ulcers, explained Elmer Y. Tu, MD, associate professor of clinical…

Double Trouble: When Corneal Ulcers go from Bad to Worse

Fungal keratitis is an aggressive and difficult to treat condition that often requires surgical intervention for complete resolution.

While contact lenses are safely used by millions of people every day, they do carry a risk of eye infection. The most common infection related to contact lens use is keratitis, an infection of the cornea (the clear, round dome covering the eye's iris and pupil).

New research finds certain species of bacteria to be more prominent in the eyes of contact-wearers, offering a possible explanation for why they’re prone to some kinds of infections.

Recent outbreaks of serious eye infections among contact-lens users may be tied to a reduced use of chlorine to decontaminate public water supplies in response to a federal environmental mandate, according to a team of Chicago doctors who discovered the latest eye problems.

As contact lenses continue to gain popularity (including for recreational purposes) the proportion of the population at increased risk of developing Acanthamoeba keratitis may rise.

What Is a Corneal Ulcer (Keratitis)?

A corneal ulcer (also known as keratitis) is an open sore on the cornea. The cornea covers the iris and the round pupil, much like a watch crystal covers the face of a watch. A corneal ulcer usually results from an eye infection, but severe dry eye or other eye disorders can cause it.

But don’t get too worried: Acanthamoeba keratitis is rare. In the U.S. there are just one to two cases per 1 million contact users annually. And the best news is that we can avoid it. “But a little bit of concern is good,” Raju says. “Contacts are great as long as we take care of them, but we have to remember it’s still plastic. We don’t need them in our eye 24/7, 365.”

“Before the introduction of fourth-generation fluoroquinolones, every ulcer required referral to a tertiary-care center and the compounding of special antibiotics to treat the lesion,” said Dr. Tu. “But since then, primary-care ophthalmologists can write prescriptions to cure bacterial ulcers, often eliminating the need for referral to a tertiary-care center.” That doesn’t mean that diagnosing and treating corneal ulcers (ulcerative keratitis) is simple.

People who wear contact lenses say they're diligent about keeping them clean. But press them for details, and it turns out that hardly anyone is doing it the right way.

The most common etiology of corneal ulcers is infectious, with bacterial pathogens responsible for a majority of the cases. Ulcers start as keratitis (inflammation of the cornea) after a break in the corneal epithelium allows bacteria to enter. These breaks are most commonly due to contact lens wear, corneal abrasions, and other ocular trauma