Where in health am I? : Home / Health Cloud / Challenges / Infections / Flu / Bird Flu

When we think of the major threats to our national security, the first to come to mind are nuclear proliferation, rogue states and global terrorism. But another kind of threat lurks beyond our shores, one from nature, not humans - an avian flu pandemic - Barack Obama 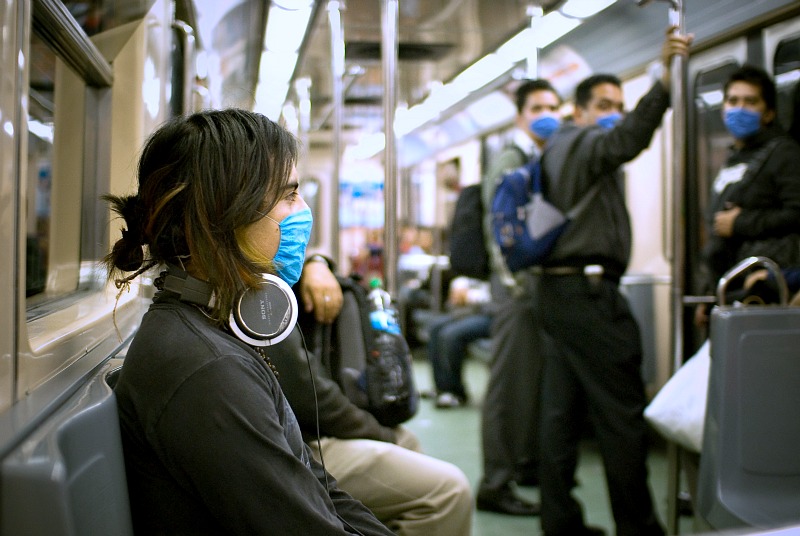 Pathogens love us—we offer them a whole host of ways to attack our bodies. We consider them "bad" because to exist they must invade our cells, but just like us, pathogens are organisms that evolve with one goal: survival.

In order to not die off, bacteria and viruses have to efficiently infect us and reproduce. Herpes and HPV spread best through sexual contact, Lyme disease and malaria through disease-carrying arthropods, and salmonella and E. coli in food. Respiratory illnesses like the common cold, the flu, and strep throat transmit best on tiny droplets in the air.

If a pathogen's purpose is to reproduce, it has to balance its virulence with its ability to infect host…

Avian flu is known as one of the most infectious diseases: the R number, which was often discussed for the spread of Covid-19, can be as high as 100 for avian flu, meaning one bird can infect as many as 100 others. And the past few months have seen exponential spread of the virus, with Britain and Europe hit especially hard.

A Dolphin, a Porpoise and Two Men Got Bird Flu. That’s a Warning to the Rest of Us.

If these four events — one dead dolphin, one dead porpoise and two men testing positive for a dangerous bird virus — seem disconnected and insignificant, perhaps it’s because you haven’t heard of “viral chatter.”

Why is bird flu so bad right now?

The virus is running amok around the world. Possible explanations include an enhanced ability to replicate or infect more bird species.

Explainer: what is H7N9 bird flu?

The Looming Threat of Avian Flu

Last year’s outbreak showed just how difficult it is to protect America’s agricultural system from devastating diseases. Next time it could be even worse.

Scientists have long worried that an influenza virus that has ravaged poultry and wild birds in Asia might evolve to pose a threat to humans.

Avian Flu Symptoms: How Can You Tell If You Have H5N1?

The diagnosis of H5N1 based on symptoms alone is difficult because they are so similar to other flu strains; laboratory testing is required to confirm infection, according to the the US Centers for Disease Control and Prevention (CDC) The bird flu is generally spread to people through direct contact with infected birds or poultry livestock.

Bird flu is back: here's what you need to know

Like humans, birds — from chickens to ducks and other wild poultry— get sick with the flu sometimes. When they do, bird flu virus can spread easily among them by way of respiratory secretions and feces, reaching epidemic proportions very quickly. The reason experts worry so much about bird flu, however, is because it's an easily transmissible respiratory virus and some strains have managed to infect humans — with deadly outcomes.

Many microbiologists consider influenza to be the virus most likely to start a pandemic that kills millions, as the 1918 Spanish flu did. But the flu is notoriously unpredictable. Public health experts have become wary about raising alarms over new strains because the grave predictions made in 2005 and 2009 turned out to be overblown.

Flu viruses attach to receptors found on the cells of their intended victims. Bird flu viruses attach to one type of receptor. The cells found in the human upper respiratory tract — where a flu infection takes hold — are mostly lined with a different type of receptor, which explains why these viruses don’t easily infect people. The Scripps team, however, found that by tweaking the genetic code of H7N9’s hemagglutinin gene, they could change the receptors the virus latched on to, from the bird type to the human version.

H7N9, or avian influenza A, is a virus that infects both human and birds and manifests with flu-like symptoms. Most of the cases of human infections were linked to recent exposure to live poultry or contaminated environments like livestock markets.

While avian flu has been a prominent public health issue since the 1990s, ongoing outbreaks have never been so widely spread around the world - something infectious disease experts put down to greater resilience of strains currently circulating, rather than improved detection or reporting. While there would normally be around two or three bird flu strains recorded in birds at any one time, now there are at least half a dozen, including H5N1, H5N2, H5N8 and H7N8.

The New Bird Flu: How Dangerous Is Avian Flu H7N9?

The virulence of the H7N9 virus is not the only reason health officials around the world are scurrying to figure out the scope of the danger it poses. Genetic evaluation of the H7N9 virus shows it has the ability to mutate readily.

This year's outbreak is more deadly than every other year combined.

What Happened to Avian Flu?

It never really went away. We just forgot about it.

Where Is Avian Flu Hiding?

The H5 flu strains may not be spreading because of conditions on the farms themselves. Instead, wild ducks and geese appear to be harboring the virus. The birds have been natural reservoirs for other H5 viruses without getting sick, making them likely couriers of the current strains gripping the nation.

Will the World's Most Worrying Flu Virus Go Pandemic?

Influenza viruses come in many flavors—H5N1, H1N1, H3N2, and so on. The H and N refer to two proteins on their surface, and the numbers refer to the versions of those proteins that a particular virus carries. H1N1 was responsible for both the catastrophic pandemic of 1918 that killed millions of people, and the most recent (and much milder) one from 2009. H5N1 is the bird-flu subtype that has been worrying scientists for almost two decades. But H7N9? Until recently, it had flown under the radar.

What is bird flu and are we at risk? WIRED debunks the myths

H7N9 and H5N8 strains of bird flu are making a resurgence - what does the virus mean for humans?

One way to fight off bird flu: extra-CRISPRed chicken

You might not think you have much in common with the chicken on your plate, but we’re not so very different from our feathered friends. The biggest similarity that concerns epidemiologists is a shared susceptibility to the so-called avian flu (the strain H1N5). Although epidemiologists and governments around the world are trying to prepare for future pandemics of this disease, geneticists have a potential loop-hole: creating chickens that can’t get the flu at all. Although much recent coverage of CRISPR has been focused on gene-edited humans, figuring out how to alter the animals we eat is a burgeoning field.

Can Gene Editing Stop The Bird Flu? Here Is The Latest With Chickens

They probably won't be wearing capes and tights. But will creating new "superchickens" help prevent the next human influenza pandemic? If so, chicken science may have just crossed a road in moving towards genetically engineering chickens to be resistant to the bird flu.

What happened to bird flu? How a major threat to human health faded from view

“It is good news, the fact that overall the H5N1 problems have reduced,” he said. “But you know, you can look at it the other way around. So now we have two high pathogenic [H5] viruses kicking around.”

Why Chinese Scientists Are More Worried Than Ever About Bird Flu

"Ten years ago, H7N9 was less lethal," says Guan. "Now it's become deadlier in chickens. Before it barely affected chickens. Now many are dying. Our research shows it can kill all the chickens in our lab within 24 hours. If this latest mutation isn't stopped, more will die." Guan says this is very bad news for a global poultry industry that's worth hundreds of billions of dollars, and he says China's government is already looking into vaccinating chickens.

Birds and pigs have caused fast-moving pandemics before. Take a look at the last century: A strain of the influenza virus containing both avian and swine genes caused the 1918 Spanish flu pandemic that killed up to 50 million people worldwide. The 1957 Asian flu originated in birds, wiping out up to four million people. In 1968, a similar strain killed about one million. And in 2009, the H1N1 swine flu infected 60 million people worldwide. These influenza viruses started off being transmitted in birds and pigs via the fecal-oral route.

"Medicine is a social science, and politics is nothing else but medicine on a large scale"—Rudolf Virchow

As part of the National Strategy for Pandemic Influenza, which includes both avian influenza and human pandemic preparedness, the U.S. Department of Agriculture (USDA) works with its partners on the international and domestic fronts to help control the spread of highly pathogenic H5N1 avian influenza. Learn more about avian influenza and what you can do to protect poultry.

Avian influenza virus usually refers to influenza A viruses found chiefly in birds, but infections can occur in humans.

Bird flu is caused by a type of influenza virus that rarely infects humans. But when bird flu does strike humans, it's often deadly. More than half the people who become infected with bird flu die of the disease. In recent years, outbreaks of bird flu have occurred in Asia, Africa and parts of Europe. Most people who have developed symptoms of bird flu have had close contact with sick birds. In a few cases, bird flu has passed from one person to another.

Bird flu (avian influenza) is a disease caused by an influenza virus that primarily affects birds. In the late 1990s, a new strain of bird flu arose that was remarkable for its ability to cause severe disease and death, especially in domesticated birds such as ducks, chickens, or turkeys. As a result, this strain was called highly pathogenic (meaning very severe) avian influenza.

Breaking news on bird flu updated throughout the day, our global network of specialist correspondents provide comprehensive coverage of science and technology news.

Your Source for the Latest Research News on bird flu

Most avian influenza viruses do not cause disease in humans. However, some are zoonotic, meaning that they can infect humans and cause disease. The most well known example is the avian influenza subtype H5N1 viruses currently circulating in poultry in parts of Asia and northeast Africa, which have caused human disease and deaths since 1997. Other avian influenza subtypes, including H7N7 and H9N2, have also infected people. Some of these infections have been very severe and some have resulted in deaths, but many infections have been mild or even subclinical in humans.