Where in health am I? : Home / Health Cloud / Challenges / Infections / Morgellons 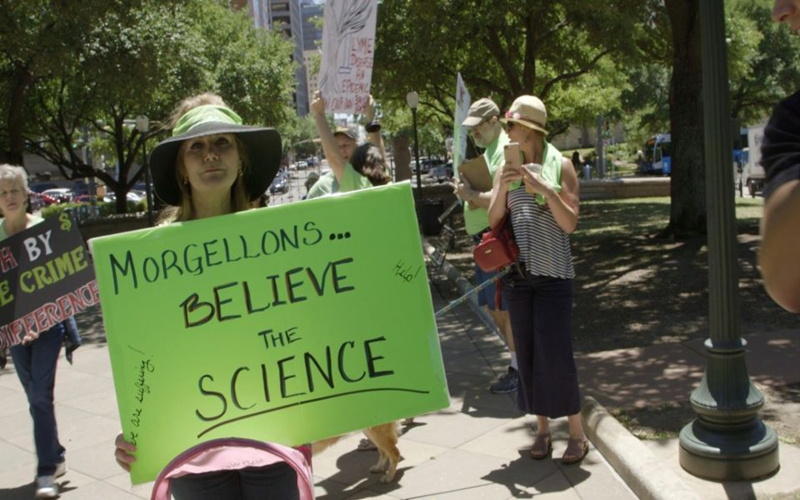 image by: Skin Deep: The Battle Over Morgellons

It all started in August 2007, on a family holiday in New England. Paul had been watching Harry Potter And The Order Of The Phoenix with his wife and two sons, and he had started to itch. His legs, his arms, his torso – it was everywhere. It must be fleas in the seat, he decided.

But the 55-year-old IT executive from Birmingham has been itching ever since, and the mystery of what is wrong with him has only deepened. When Paul rubbed his fingertips over the pimples that dotted his skin, he felt spines. Weird, alien things, like splinters. Then, in 2008, his wife was soothing his back with surgical spirit when the cotton swab she was using gathered a curious blue-black haze from…

Morgellons disease is a complex issue. Not everyone on the internet who uses the term "Morgellons" is sick with the same thing or even signifies the same malady. In fact, conspiracy theorists who claim Morgellons is government mind control via chemtrails get more YouTube hits than trained scientists explaining the infectious process of Morgellons disease.

History of Morgellons disease: from delusion to definition

Morgellons disease (MD) is a skin condition characterized by the presence of multicolored filaments that lie under, are embedded in, or project from skin. Although the condition may have a longer history, disease matching the above description was first reported in the US in 2002. Since that time, the condition that we know as MD has become a polemic topic.

Skin Deep: The Battle Over Morgellons

A nurse squares off against a dermatologist as they fight to discover the truth behind Morgellons, a disease whose bizarre symptoms include fibers growing out of victims’ skin. The battle heats up when the medical industry declares the patients’ symptoms to be nothing more than products of delusional minds. Now, as evidence linking Morgellons to Lyme disease mounts, the question becomes "Who is delusional, the patients who believe or the doctors who deny?”

Clinical, Epidemiologic, Histopathologic and Molecular Features of an Unexplained Dermopathy

This unexplained dermopathy was rare among this population of Northern California residents, but associated with significantly reduced health-related quality of life. No common underlying medical condition or infectious source was identified, similar to more commonly recognized conditions such as delusional infestation.

What sounds like a science fiction movie is actually real life for the unlucky people who have contracted the disease which leaves painful sores all over the body. The sores ooze blue fibers, white threads and little black specks of sand-like material.

Morgellons Disease - A Crime of Silence

Electron microscopy of the Morgellons filaments reveals that they are not simple solid forms, rather, they are complex structures with internal structures. In some laboratory experiments these fibers have been shown to re-assemble when they are separated, to squirm and pulsate and even to reproduce.

Burrowing bugs, delusions or a nervous disorder? Why can't medical scientists get to the bottom of Morgellons Disease.

A couple of years ago my son and I both had problems with itching (actually more of a feeling of being bit) and dark spots that suddenly appeared on our bodies. Until recently I thought the itching was due to a mold allergy and I never was totally sure about the spots, but now I'm not so sure exactly what we had. I was just reading an article on Morgellons and was blown away by some of the the similarities between the symptoms the Morgellon patients described and our experiences.

A new study published today sheds light on Morgellons disease, a controversial condition marked by crawling sensations in the skin. In response to increasing reports of Morgellons symptoms, scientists from the U.S. Centers for Disease Control and Prevention analyzed blood and skin samples from 115 patients in Northern California and found no evidence linking Morgellons to an infection or environmental cause.

Morgellons: The skin-crawling disease that is all in the head

A strange disease in which sufferers say they find fibers, fuzz and other debris sprouting from sores on their skin is not contagious and has no clear cause, the largest-ever study of the condition called Morgellons has found.

It's a mysterious condition that affects tens of thousands worldwide. But what is it?

Skin Deep: The Battle Over Morgellons

While our documentary gives voice to both sides of the debate, the film focuses heavily on the new science and the need for empathy for those patients mercilessly caught between doubt and a lengthy scientific process.

The Charles E. Holman Foundation is a grassroots activist organization that supports research, education, diagnosis and treatment of Morgellons Disease. Ultimately, we seek discovery of it's cause and cure. We utilize creative confrontation to expose any person or group opposing or inhibiting education, awareness or recognition of Morgellons Disease.

A German site for Morgellons awareness and support.

A place away from the sensationalism that places instead a focus on the scientifically established, and very Real Morgellons Disease.

Morgellons is a multi-symptom disease that is just now starting to be researched and understood. It has a number primary symptoms:

Morgellons disease, or more properly "the Morgellons"[1], is a neologism adapted from a very old medical reference and used by Mary Leitao, of McMurray, Pennsylvania, to describe her child's rash, which doctors described as common eczema.