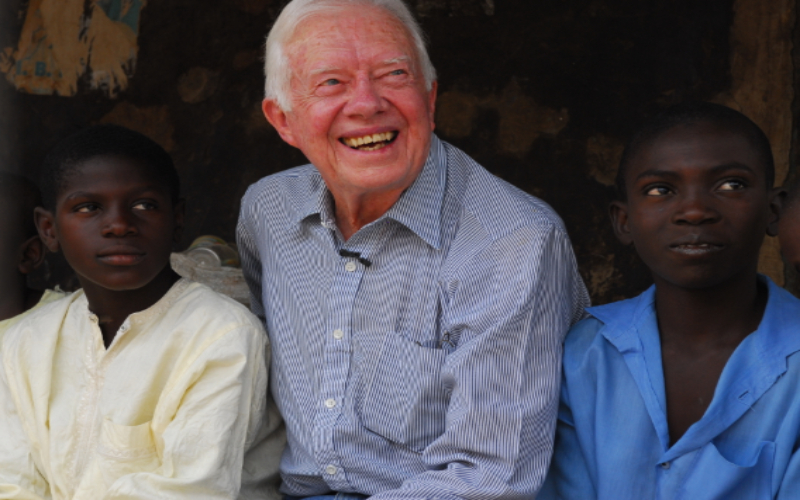 image by: The Carter Center

The image of a serpent twisting around a staff is probably medicine’s most enduring icon; we wear it on medical alert bracelets, hang it in doctors’ surgeries, and print it on healthcare documents. But the story behind the so-called fiery serpent is, at least according to former US President Jimmy Carter, almost over.

Since 1986, incidences of Guinea worm disease have reduced from 3.5 million to just 22. Read that again—just twenty-two. It’s a drop so enormous that medical experts believe Guinea worm disease is on the brink of becoming the second ever human disease to be completely eradicated through human endeavour, the first being smallpox in 1980...

For centuries, the only…

The End Of Guinea Worm Was Just Around the Corner. Not Anymore

The epic, decades-long campaign against the parasite — which humans and animals can contract from drinking water and which, about a year later, emerges as a worm up to 3 feet long from painful lesions on the feet or legs — has been one of the big success stories in modern global health. In the 1980s, more than 3 million people in sub-Saharan Africa and South Asia contracted Guinea worm annually. Last year, that number was down to 28. Former President Jimmy Carter, who turned 95 this week and whose nonprofit Carter Center has led much of the Guinea worm eradication effort, has said that he would "like for the last Guinea worm to die before I do." But that goal moved further out of reach this week, when the World Health Organization quietly revealed that it has moved its expected Guinea worm eradication date, which had been 2020, ahead a decade, to 2030. The change was first reported in Nature.

The worms are synonymous with excruciating pain. The disease’s formal name is dracunculiasis: “affliction with little dragons.” It is an ancient horror. Some scholars think Guinea worms may have been the fiery serpents said in the Bible to have attacked the Israelites in the desert. At one time, they contaminated many Middle East oases.

Guinea worm, on the brink of eradication, puts up a surprisingly stubborn fight

The eradication of Guinea worm, thought to have been within grasp, is now at least several years away because of a major setback in the North African country of Chad, according to global health experts and others. With human cases tumbling in recent years — only 11 so far in 2016, down from an estimated 3.5 million in 21 countries in 1986 — it had been assumed that the eradication effort was on the verge of consigning Guinea worm to the annals of history. But the parasite, which can be over a yard long and burrows out of an infected person’s body, appears there to have found a niche in a new host: hundreds of dogs.

The surefire way to prevent Guinea worm disease is to build and use safe drinking water systems. But there are cheaper, lower-tech remedies. The water flea is large enough that it can be easily removed by pouring drinking water through a cloth or steel mesh filter (or even a T-shirt). Sufferers must be kept away from the water supply while the worms are emerging. And ponds can be treated with a mild chemical to kill the larvae. Eradicating Guinea worm disease means driving the species to extinction; Guinea worm disease cannot survive without its hosts.

Jimmy Carter: “I’d Like to See the Last Guinea Worm Die Before I Do.”

Rather than curing the disease, the Carter Center, working with the U.S. Centers for Disease Control and Prevention, the World Health Organization, and national health ministries, worked to educate communities about how the disease spreads and to provide water filtration methods.

The End Is Nigh For the Guinea Worm

Eradicating this nasty parasite would be great for humanity, but should we consider the ecological impacts?

The Last Days Of Guinea Worm

Guinea worm is going down. Way down. From more than 3 million cases of Guinea worm disease a year in the 1980s, the world tally in 2016 stands at just two confirmed cases.

The Man Who (Almost) Wiped Out the Guinea Worms

“To the demise of the worm!” cry all in attendance, clinking glasses. It is a ritual he has followed for decades, ever since becoming the chief strategist in the war against the Guinea worm run by the Carter Center, the global health philanthropy established in Atlanta by former President Jimmy Carter.

Guinea worm is a horrifying, ingenious little monster. Its larvae live in rivers and streams. When a person drinks contaminated water, the larvae transfer into the human host, maturing inside the body. The Carter Center has been waging a nylon war against Guinea worm since 1986, and we are tantalizingly close to global eradication.

Why a painful parasite with no cure is close to eradication

Guinea worm disease — a terrible parasite that once affected millions in developing countries — may not be long for this world.

The image of a serpent twisting around a staff is probably medicine’s most enduring icon; we wear it on medical alert bracelets, hang it in doctors’ surgeries, and print it on healthcare documents. But the story behind the so-called fiery serpent is, at least according to former US President Jimmy Carter, almost over.

Save the Guinea Worm Foundation

The program has made great strides from 3.5 million cases annually in the mid-1980s to 126 cases in 2014. In 2015, only 22 cases were reported worldwide—a 83% reduction in cases from the previous year. Global eradication is within reach.