Unlike malaria, river blindness is not fatal, but it causes a miserable life - Moses Katabarwa 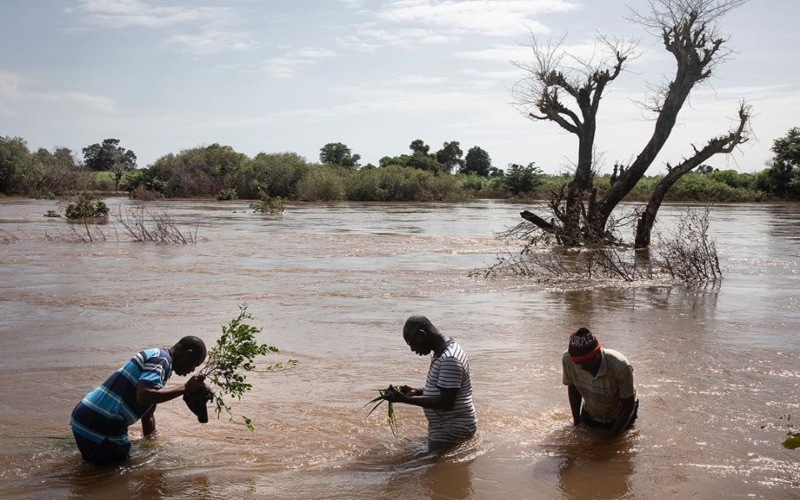 You may not have realized it, but you probably have a video microscope in your pocket – one with the potential to help treat hundreds of thousands of blind individuals throughout the world and millions more at risk for blindness. All you need is an app and a handheld device you could probably assemble in your basement with $100 in parts. And a ticket to sub-Saharan Africa, where most of the need is.

The second leading cause of infectious blindness in the world is river blindness, or onchocerciasis, caused by a parasitic worm transmitted through bites from blackflies that live and breed near fast-flowing rivers. The World Health Organization estimates at least 25 million people have…

‘Reaching the Last Mile Fund’ aims to eliminate river blindness and lymphatic filariasis, which leads to elephantiasis, from Africa and the Middle East.

Onchocerciasis, or river blindness, is a worm spread through the bite of a blackfly, which breeds in rivers. The parasite produces larvae that move through human tissue, causing sever itching and skin rashes, as well as eye lesions, which can lead to severe visual impairment. An estimated 270,000 people are currently blinded by the disease. The vast majority of people at-risk live in Africa, where it has taken a huge economic toll on rural communities, which have had to move away from rivers to less productive land in order to avoid the disease.

Exploring the genome of the river blindness parasite

The findings shed light on the parasite’s emerging drug-resistance, and may ultimately lead to improved ways to treat and prevent river blindness.

How to Cure The Diseases That Nobel-Winning Drugs Cannot

Don’t go after the parasitic worms that cause the diseases; go after the bacteria that those worms depend on.

How Worm Warriors Are Beating An Unbeatable Worm

How do you get rid of river blindness? It's all about the worm. Specifically, about "breaking the life cycle" of onchocerca volvulu, the parasitic worm that causes the disease, says Dr. Frank O. Richards Jr., who directs the Carter Center's river blindness elimination and other tropical disease programs.

Onchocerciasis, or river blindness as it’s more commonly known, is a major public health problem in the wet tropics, and especially in tropical Africa. This eye and skin disease is caused by a filaria worm called Onchocerca volvulus that is spread to humans through the bite of an infected blackfly. The common name of the disease acknowledges the blackfly’s preference for breeding near fast-flowing rivers, and as the first written European description by John Hanning Speake in Uganda in 1864 showed, blackflies are certainly not pleasant...

With river blindness, 'you never sleep'

Unlike malaria, river blindness is not fatal, but it causes a "miserable life," said Moses Katabarwa, senior epidemiologist for the Atlanta-based Carter Center's River Blindness Program, which has been leading an effort to eliminate the disease in the Americas and several African countries.

You may not have realized it, but you probably have a video microscope in your pocket – one with the potential to help treat hundreds of thousands of blind individuals throughout the world and millions more at risk for blindness.

Onchocerciasis, or River Blindness, is a neglected tropical disease (NTD) caused by the parasitic worm Onchocerca volvulus. It is transmitted through repeated bites by blackflies of the genus Simulium. The disease is called River Blindness because the blackfly that transmits the infection lives and breeds near fast-flowing streams and rivers and the infection can result in blindness.

“The global impact of the discovery and the impact on mankind is immeasurable,” Hans Fossberg, a neuroscientist and member of the Nobel Assembly, said Monday at a press conference. Together, Omura, Campbell, and Tu saved millions of lives worldwide.

The World Health Organization 2030 goals for onchocerciasis: Insights and perspectives from mathematical modelling

The World Health Organization (WHO) has embarked on a consultation process to refine the 2030 goals for priority neglected tropical diseases (NTDs), onchocerciasis among them.

One of the problems with river blindness is that it doesn't kill you. It's a nasty disease that causes agonizing itching, disfigured skin and, in the worst cases, blindness. River blindness is a parasitic infection transmitted by black flies that breed in rapidly flowing bodies of water. The worms burrow under your skin and eventually wiggle across your pupils, destroying your vision. But because the disease usually isn't fatal, health officials in cash-strapped tropical countries have slotted it lower on their to-do lists than malaria, TB, cholera, AIDS and other life-threatening diseases.

The distribution of onchocerciasis is linked to the location of blackflies which are naturally found close to the fast-running streams and rivers in the inter-tropical zones. Therefore, about 90% of the disease occurs in Africa. Onchocerciasis is also found in six countries in Latin America and in Yemen in the Arabian Peninsula, where the disease is believed to be exported by the slave trade.