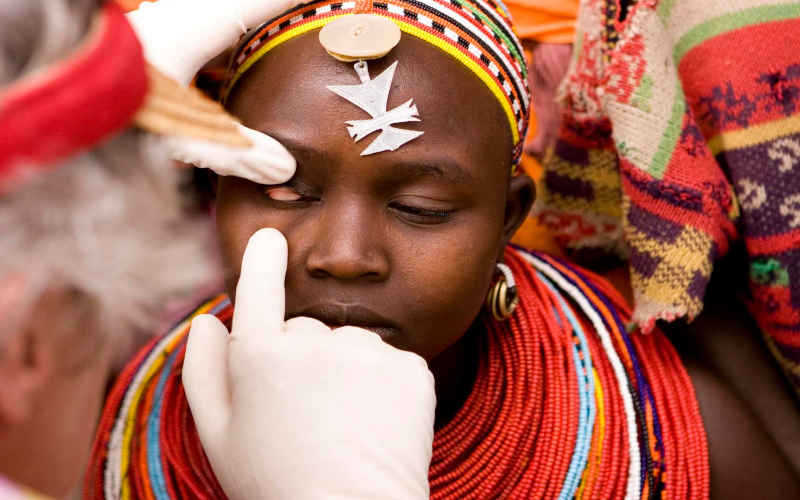 The Eye of the Beholder: Why Fighting Trachoma Matters

In the poorest places in the world, an eye disease called trachoma is robbing women of their dignity, their hope for the future, and even their ability to ensure the survival of their children. "Trachoma" sounds like a remote or obscure disease, but this bacterial infection used to exist throughout the world, including in the United States and in my own native Great Britain.

Only a few decades ago, wealthy nations wiped out the disease through improvements in access to medical care and sanitation. Yet, trachoma lingers in the most neglected countries on earth, with more than 320 million people remaining at risk. It has been estimated that the economic cost of trachoma could be as…

Now in Sight: Success Against an Infection That Blinds

Quietly, in the shadow of fights against better-known diseases like Ebola, AIDS and malaria, the 20-year battle against trachoma is chalking up impressive victories.

Trachoma is currently endemic in 44 countries. The African continent is most affected. The disease is endemic in the inner countries of the Sahel belt such as Sudan and Ethiopia. The one ray of hope has been Ghana which last year became the first country in Africa to be declared trachoma free.

Trachoma is the most common infectious cause of blindness worldwide. It afflicts some of the poorest regions of the globe, predominantly in Africa and Asia. The disease is initiated in early childhood by repeated infection of the ocular surface by Chlamydia trachomatis. This triggers recurrent chronic inflammatory episodes, leading to the development of conjunctival scarring. This scar tissue contracts, distorting the eyelids (entropion) causing contact between the eyelashes and the surface of the eye (trichiasis). This compromises the cornea and blinding opacification often ensues.

Trachoma: Past, present and future

Trachoma is one of the leading causes of preventable blindness in developing countries. It was reported as one of the seven most neglected tropical diseases that can be prevented via drug administration. Its infliction is primarily aimed at those living in areas deprived of clean water and proper sanitation. It is estimated that trachoma is the cause of visual impairment in about 2.2 million people worldwide of which about 1.2 million are completely blind.

Why is trachoma blinding Aboriginal children when mainstream Australia eliminated it 100 years ago?

The Eye of the Beholder: Why Fighting Trachoma Matters

"Trachoma" sounds like a remote or obscure disease, but this bacterial infection used to exist throughout the world, including in the United States and in my own native Great Britain. Only a few decades ago, wealthy nations wiped out the disease through improvements in access to medical care and sanitation. Yet, trachoma lingers in the most neglected countries on earth...

ICTC was established in 2004 to contribute to global efforts to eliminate trachoma by supporting the GET2020 Alliance and to advocate for and implement the WHO-endorsed SAFE strategy. The coalition has a highly committed and professional multi-stakeholder membership, including NGDOs, research and academic institutions, donors and private sector organizations.

The International Trachoma Initiative (ITI) was founded in 1998 in response to the World Health Organization’s (WHO) call to eliminate blinding trachoma by 2020 (GET2020). ITI’s founding partners, Pfizer and the Edna McConnell Clark Foundation, saw the need for an international nongovernmental organization dedicated solely to the elimination of blinding trachoma.

We see a world in which no person is needlessly blind and Indigenous Australians exercise their right to good health.

An open-access resource on the geographical distribution of trachoma.

The Carter Center works with ministries of health in six African countries to eliminate blinding trachoma, the world's leading cause of preventable blindness.

Helen Keller International is helping six African countries increase their ability to eliminate blinding trachoma by 2020. We help train local surgeons to conduct surgeries to preserve the sight of those afflicted.

At first, trachoma may cause mild itching and irritation of your eyes and eyelids. Then you may notice swollen eyelids and pus draining from the eyes. Untreated trachoma can lead to blindness.

Although trachoma is caused by a small parasitic bacteria, poor sanitation, unclean water supply, and reduced personal and community hygiene allow the bacteria to infect and reinfect eyes of individuals living in endemic areas. Prevention of vision loss requires adequate, prompt treatment, in addition to education and teaching proper hygiene to the parents and children.

Trachoma is a chronic conjunctivitis caused by Chlamydia trachomatis and is characterized by progressive exacerbations and remissions. It is the leading cause of preventable blindness worldwide. Initial symptoms are conjunctival hyperemia, eyelid edema, photophobia, and lacrimation.

In tropical countries, it is estimated that 25 million people are blind from preventable causes and of those, trachoma is the most important, contributing to approximately 4% of global blindness. Trachoma is a very common chronic conjunctival infection caused by Chlamydia trachomatis, which is transmitted by flies or through close personal contact.

Infection usually first occurs in childhood but people do not became blind until adulthood. The disease progresses over years as repeated infections cause scarring on the inside of the eyelid, earning it the name of the “quiet disease” The eyelashes eventually turn in. This causes rubbing on the cornea at the front of the eye. The cornea becomes scarred leading to severe vision loss and eventually blindness.