Where in health am I? : Home / Health Cloud / Challenges / Infections / Parasites / Cryptosporidium

Water is the driving force of all nature - Leonardo da Vinci 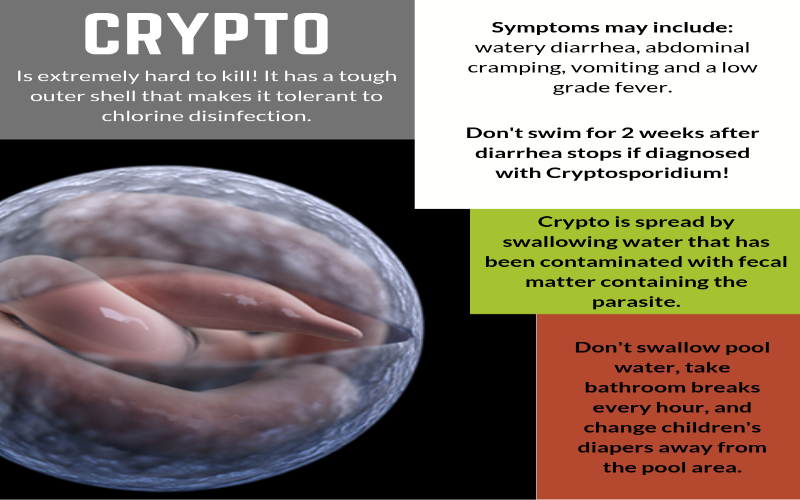 image by: Virginia Department of Health

“Water-borne pathogen.” Three gut-twisting words with enough power to make any epidemiologist, public health official, or globetrotting tourist double over. One of the most common forms of disease transmission is the microbial hijacking of our most precious fluid. This mechanism of infection is employed by a motley crew of microscopic organisms that have adapted to prey upon our unquenchable thirst, from pervasive bacteria like cholera and typhoid to often less famous but no less formidable parasites such as giardia and dracunculiasis.

Yes, these pathogens commonly sidle their way to our coiling intestines via the ingestion of water, but often not via so prosaic a route as an icy glass of unpurified water or a nibble of some contaminated, unwashed greens. These microorganisms find their way to our gastrointestinal tract in ways as diverse as our assorted day-to-day interactions with water. One particular case associated with a little known parasite, Cryptosporidium parvum, illustrates how complex our interactions with H2O can be, and how innumerable and crafty are the routes by which pathogens frequently creep into our guts.

Cryptosporidium is a hardy protozoan parasite shaped like an irregular cannonball and is a puny little thing, topping out at 4 to 7 microns. It has a robust shell protecting it from environmental degradation, an armor so tough that it’s resistant to powerful disinfectants such as chlorination. This shield not only offers the parasite protection against unfriendly environments, but it also allows the parasite to survive for long periods of time outside the the guts of animals before cycling again through another animal with intestines.

Crypto, as it’s affectionately known by parasitologists, is spread in the fecal-oral fashion. The parasite begins its cycle via an animal’s ingestion of fecally contaminated water and goes on to infect and replicate within the epithelium of the microvilli of the small intestine. The disease, known as cryptosporidiosis, causes a watery diarrhea with abdominal cramps and nausea tossed in as a bonus. In some fortunate individuals the infection may be asymptomatic, but for most of us, the first symptoms of disease appear two to ten days after infection and the disease often runs its course for anywhere from a week to several weeks.

Crypto infection can cause significant morbidity in the immunocompromised. Indeed, it was only during the outbreak of the HIV/AIDS crisis in the 1980s that the parasite earned its street cred as a serious and ubiquitous pathogen.

The parasite is kind enough to restrict its shenanigans to the world of water. Outbreaks in humans typically revolve around recreational water exposure: swimming pools, water parks, water sprinklers, and wave pools. Crypto establishes itself in these popular summertime locales often through fecal contamination, either of the human or animal variety. Regarding the latter, runoff from farms and grazing pastures are often responsible.

Not content to simply spoil our summertime fun, crypto has proven quite adept at ruining even more mundane aquatic activities. Occasionally, crypto contaminates drinking water sources in rivers, lakes and wells, and this is where it has caused the greatest splash in terms of infections. It has caused humungous outbreaks affecting tens of thousands of people, most notably in the United States, Sweden and Ireland. The parasite made its big time break in Milwaukee, Wisconsin, in 1993 when it infected 403,000 people after one of the city’s two water purification plants were contaminated with runoff from cattle pastures.

In developing countries, crypto is responsible for 8 to 20% of all diarrheal disease and ranks among the top four of major pathogens causing diarrheal illness in children . Cryptosporidiosis is, of all the parasitic waterborne diseases, by far the most common and geographically expansive.

Until recently, crypto seemed so predictable, ruining our hot summer days spent in the tepid, toddler-filled waters of the local water park’s lazy river or casting a pall of fear over those of you fortunate enough to enjoy tap water that is not drawn directly from the cafe au lait-colored waters of the Mississippi. The effect of our limited understanding was that cryptosporidium’s role in an outbreak a few years ago was a surprise for those that thought that this little beastie was a one-trick pony.

In the early summer of 2011, a barn straddling the border of Indiana and Michigan caught fire. Firefighters from both states – three Michigan stations and one station from Indiana – responded to the scene and staged an incredible rescue, evacuating those at the greatest risk of harm: 240 calves born just that week. To extinguish the barn fire, “local hydrant water and onsite swimming pond water” were used. At the end of the day, though the barn was lost, the fire was extinguished and calves just embarking on the heydey (hayday?) of their cud-chewing lives were rescued. In other words, a success.

It was only a week later that the diarrhea hit and the Indiana station promptly reported an outbreak of gastrointestinal disease to the Indiana Department of Homeland Security. Of the 34 firefighters that responded to the fire, 20 fell ill and reported symptoms of diarrhea, abdominal cramps, nausea, vomiting, and fever. Several men missed workdays and one man was hospitalized. Firefighters from both companies were sickened, indicating that the source of their gastro ills likely originated from their joint firefighting effort.

Stool specimens from the firefighters yielded a curveball diagnosis: Cryptosporidium parvum. The parasite was also later isolated from the calves and the pond adjacent to the barn. An epidemiological investigation indicated that those firefighters that had direct calf contact, either carrying or maneuvering the calves from the barn to safety, had a higher incidence of infection.

But there were other likely exposures, though none found to be statistically significant or as cool as saving baby cows. The second-hand spray from hosing water to extinguish the fire may have contributed to the outbreak. Or it may have originated after the fire, when the men deglazed themselves of soot and ash with pond-water thereby infecting themselves inadvertently.

The Michigan health department suggested the farmer treat the well water and refrain from swimming in the pond. Meanwhile, the firetrucks, equipment and gear were also recommended to undergo a serious decontamination to be rid of residual crypto contamination

This is the first known instance of a cryptosporidiosis outbreak associated with a firefighting response. Yes, Cryptosporidium is a waterborne parasite but this particular outbreak is notable in that the affected population and the implicated activity of transmission were wildly different from what has been seen in the past. For public health officials, this outbreak neatly demonstrates the never-ending challenges of protecting the public from infectious diseases.

Of the many occupational hazards and flat-out dangers that firefighters are exposed to in their noble occupation, diarrhea is low on the ladder. Cardiovascular disease, hearing loss, and respiratory ills are the most common health problems among firefighters, not to mention the ever present dangers of battling blazing buildings and rescuing tree-bound felines. Now a wee protozoan parasite that causes diarrhea is a new and esoteric workplace hazard for firefighters

Fortunately for the rest of us, we rarely have to engage in such risky enterprises or other possibly hazardous aquatic activities such as drinking water, bathing, or floating down the lazy river.

Crypto: How This Poop In Pool Parasite Has Been On The Rise

When someone offers you the opportunity to swim in "crypto," make sure you find out specifically what is meant by "crypto." Swimming in cryptocurrency could be good. Swimming in Cryptosporidium would not be good.

Cryptosporidium is a single-celled organism, a protozoan. It causes diarrhea that often lasts for 2-3 weeks and is readily missed by the lab. It This is because often only a stool culture is ordered, and the parasites are instead seen on direct examination of stool through a microscope. Many community hospitals don’t have techs skilled in this and have resorted to sending stool samples “for ova and parasites” to a reference lab, causing further diagnostic delays.

Progress In The Fight Against A Parasite That Causes Diarrheal Disease

Using CRISPR, Striepen and his colleagues were able to develop a system for altering genes in Cryptosporidium. They still can't grow the parasite in the lab, "but we can infect animals, and so that way using laboratory animals we can propagate the infection, and therefore we can also propagate these organisms that we have changed," he says. And they can also use the infected animals to test drug or vaccine candidates.

Cryptosporidium spp. distributes worldwide, especially in undeveloped and developing countries. The distribution has arisen when Cryptosporidium’s oocyst is defecated to water surface from human and animals (wildlife, domestic animals, and livestock) through the feces. The excreted oocysts are sustainable and tolerance with disinfectant, dilute bleach, and chlorine.

Cryptosporidium: A Parasite That Gets Into Drinking Water and Swimming Pools

Though it is more common in warm climates, Cryptosporidium is found in surface water everywhere - never drink untreated water and heed any boil water advisory issued by your local water utility.

Don’t Go in the Water

Why a nasty parasite is thriving in chlorinated swimming pools and water parks.

Cryptosporidium is one of four pathogens responsible for the lion's share of severe diarrhoea in infants and toddlers. Vaccines and treatments are already available or fast being developed for three of the four pathogens identified: rotavirus, Shigella bacteria and enterotoxigenic Escherichia coli (see 'Child killer'). But for 'crypto', there is no fully effective drug treatment or vaccine, and the basic research tools and infrastructure needed to discover, evaluate and develop such interventions are mostly lacking.

Residents learn the hard way after refusing treatment plant to save on the cost of water.

There isn’t really a chemical that makes water turn a darker color when someone urinates in a pool, but two new reports on the health risks of pools, hot tubs and water playgrounds might make you wish there were.

Swimming pools are full of poop, but they probably won't make you sick

To be clear: it's not because pools are clean. Pools are awful. They're full of poop and pee and probably some blood to round it all out, and lots of them don't have the proper concentration of disinfecting agents. 17 percent of people say they've peed in a public pool before (and let's be honest, if 17 percent are willing to admit it, there have to be way more pool-peeing people who aren't).

The parasite is kind enough to restrict its shenanigans to the world of water. Outbreaks in humans typically revolve around recreational water exposure: swimming pools, water parks, water sprinklers, and wave pools.

Cryptosporidium and Giardia in Water...

Cryptosporidium and Giardia in Water...a source of information & perspective.

Cryptosporidium is a microscopic parasite that causes the diarrheal disease cryptosporidiosis. Both the parasite and the disease are commonly known as "Crypto." There are many species of Cryptosporidium that infect animals, some of which also infect humans. The parasite is protected by an outer shell that allows it to survive outside the body for long periods of time and makes it very tolerant to chlorine disinfection. While this parasite can be spread in several different ways, water (drinking water and recreational water) is the most common way to spread the parasite. Cryptosporidium is a leading cause of waterborne disease among humans in the United States.