Where in health am I? : Home / Health Cloud / Challenges / Infections / Parasites / Leishmaniasis 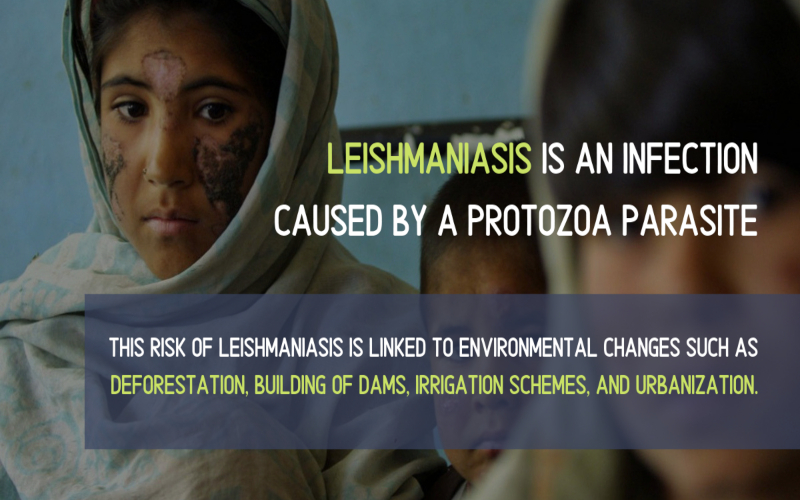 Leishmaniasis ranks on the World Health Organisation’s list of neglected tropical diseases, along with the usual suspects such as dengue, chikungunya and rabies.

But there’s a strong likelihood that it’s a disease you have never heard of. What’s even more surprising is that thousands of people in 89 countries across all continents, except Antarctica, die from the disease every year while an estimated 1.5 - 2 million are infected annually. Another 1 billion people are at high risk of infection.

Like malaria, leishmaniasis is caused by a parasite that is carried by an insect – in this case, a female sandfly. After malaria it ranks as the second most deadly protozoan disease…

A Parasitic Disease Spread by Sandflies Is More Common in the U.S. Than Previously Thought

A disease spread by sandflies seen as an exotic nuisance in the U.S. might not be solely a traveler’s disease after all. A new study published Wednesday in JAMA Dermatology suggests that most American cases of leishmaniasis are actually spread by native bugs, not caught while traveling. And thanks to climate change, the parasitic illness may become even more common in the years to come.

Can we treat leishmaniasis with tiny magnets?

A new approach to the treatment of cutaneous leishmaniasis with magnetic nanobeads is showing promise.

Leishmania transmission during blood transfusion has been a major concern in endemic areas. Although carriers may not exhibit clinical evidence of the disease, the parasite can become active and multiply in the mononuclear phagocytic system in response to factors such as patient immunological and nutritional status.

Leishmaniasis, the disfiguring parasitic disease infecting a million around the world each year

While the disease is not fatal, it causes gruesome, lifelong scarring that can disfigure faces and limbs. Because it is not deadly, and because its victims are normally the rural poor, the disease is also neglected.

Sweet success of parasite survival could also be its downfall

Scientists have discovered how a parasite responsible for spreading a serious tropical disease protects itself from starvation once inside its human host. The findings provide a new understanding of the metabolism of the Leishmania parasite and this new knowledge could potentially be used in its eradication.

Behind Enemy Lines: Cutaneous Leishmaniasis in Returning US Troops from the Middle East

However, there is one little nasty buggy and the troubling disease it transmits that is endemic in both Afghanistan and Iraq and that has bested the US military – the sandfly Phlebotomus and the protozoan parasite Leishmania. This disgraceful couple have been around for millennia; it’s thought that the biblical plague of boils described in Exodus 9:9, the “breaking out in sores on man and beast throughout the land of Egypt”, was in fact an epidemic of cutaneous leishmaniasis.

Leishmania Parasite: Deadly For Humans, But Good For Flies?

Whatever you do, do NOT do an image search for "cutaneous Leishmania".

Leishmaniasis is one of the most neglected tropical diseases with current high worldwide incidence. Caused by a group of protozoan parasites belonging to the genus Leishmania, an infection of the disease usually results with a variety of clinical syndromes, and can lead to death.

Leishmaniasis: The Neglected Disease of War, Conflict, and Human Misery

One of the least known consequences of modern conflict in the Middle East and East Africa has been the widespread devastation that results from a tropical infection known as leishmaniasis.

Leishmaniasis: The Neglected Disease of War, Conflict, and Human Misery

One of the least known consequences of modern conflict in the Middle East and East Africa has been the widespread devastation that results from a tropical infection known as leishmaniasis. The international scientific and diplomatic communities now have an opportunity to work together to prevent the spread of this neglected tropical disease and to develop new treatments or vaccines.

Look What Happens When You Pay Attention To Neglected Tropical Diseases

You may not have heard of NTDs because they've after all been neglected...by the media and many governments, funding agencies, businesses, etc. In other words, if major infectious diseases around the world were to have a party (which would be a horrible party to attend), NTDs would be the wallflowers in the corner, overlooked by many policymakers, scientists and funders.

Rare Parasitic Infection 'Leishmaniasis' Rising in the US

A parasitic infection that's rare in the United States now appears to be showing up more often in American travelers, thanks in part to the growing trend of ecotourism, experts say.

The Worst Journey in the World

Few who went looking for the lost city in the Honduran jungle returned intact. Nancy Rommelmann reviews “The Lost City of the Monkey God: A True Story” by Douglas Preston.

At the start of the 20th century it was renamed after Sir William Leishman, a British Army doctor serving in India, who first identified the parasite causing the visceral form of the disease. Dr. Leishman himself called the illness “dum dum fever” after the village where the soldier he cared for had been posted.

Like malaria, leishmaniasis is caused by a parasite that is carried by an insect – in this case, a female sandfly. After malaria it ranks as the second most deadly protozoan disease in humans. But, unlike mosquitoes that give just one form of malaria, the sandfly can give four forms of leishmaniasis. These forms range from lesions on the skin to infection of internal organs such as the spleen and liver. Lesions can lead to disability and disfiguring scars – and stigma. The other infections can be lethal if left untreated. Leishmaniasis was first identified in the 1900s.

To work for the research of Leishmaniasis in all respects in India. To coordinate research amongst people by developing indigenous methods for carrying out diagnosis and treatment for Indian public...

VL is characterised by prolonged fever, enlarged spleen and liver, substantial weight loss, and progressive anemia. These symptoms occur progressively over a period of weeks or even months. Coinfection with other infectious diseases is an increasing concern: HIV-VL coinfection has been reported in 35 countries worldwide. Almost all clinically symptomatic patients die within months if untreated.

I aim, in this blog, to dispel some myths about leishmaniasis. I also hope it of use to anyone who has recently been diagnosed with the disease and would like some idea of what to expect. I have not written at length about the disease itself as this information is available from much more respectable sources.

Leishmaniasis exists in many temperate and tropical countries of the world. The disease is most common in India, Bangladesh, Nepal, Sudan, Ethiopia, Afghanistan, Algeria, Iran, Saudi Arabia, Syria, Brazil, Colombia, Peru, and Bolivia. The most common type of leishmaniasis is cutaneous leishmaniasis.

Leishmaniasis is found in parts of about 88 countries. Most of these countries are in the tropics and subtropics. It is possible but very unlikely that you would get this disease in the United States. But you should be aware of it if you are traveling to the Middle East or parts of Central America, South America, Asia, Africa or southern Europe. Treatment is with medicines that contain antimony, a type of metal, or with strong antibiotics. The best way to prevent the disease is to protect yourself from sand fly bites.

More than 12 million people in 88 countries are known to be infected but many cases are asymptomatic. Furthermore, reporting is far from complete in many areas and true numbers are almost certainly very much higher. The male to female ratio is about 2:1, probably due to greater exposure of women to places where there is a risk of sandfly bites.