Where in health am I? : Home / Health Cloud / Challenges / Infections / Parasites / Toxoplasmosis

The accumulation of Toxoplasma gondii oocysts, found in cat feces, may be a much bigger problem than we realize because of their apparent long life and their association with some diseases - E Fuller Torrey, MD 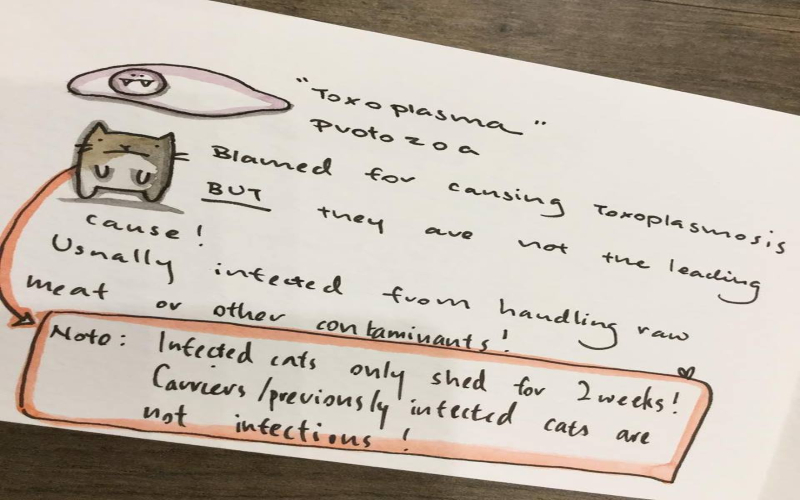 Toxoplasma gondii is one of the most widespread zoonotic pathogens in the world. Toxoplasma is a protozoal parasite that can infect almost any warm-blooded animal, including humans. In most people and animals, infection doesn’t cause any illness at all, and after the initial infection, the body usually produces strong immunity which protects it from subsequent Toxoplasma infection. Problems arise when infection occurs in a person with a weakened immune system. For example, toxoplasmosis (i.e. illness due to Toxoplasma) has been a major problem in HIV/AIDS patients, although better HIV treatments have decrased the incidence of the disease in this group in recent years. Toxoplasma can also cause…

A Groundbreaking Study Is Good News for Cats—And People

Of the many parasites known to control the mind of their host, none is more famous than Toxoplasma gondii—the single-celled organism known colloquially as Toxo. It can survive in a variety of animals, but it only reproduces sexually in cats. If it gets into mice or rats, it alters their behavior so they become fatally attracted to the scent of feline urine. They get eaten, the cat gets infected, and Toxo gets to make more Toxo. Toxo infects more than a third of the world’s people, spreading through undercooked meat or food or water contaminated by infected cat waste (but not through direct contact with cats). In most cases, the parasite is harmless, and much-hyped claims that it affects human behavior are weak. But it can also pass from mother to fetus, causing blindness, developmental problems, hydrocephalus, and other disabilities. There is no vaccine or cure, and research has been generally slow and difficult, which Toxo’s cat-dependent life cycle doesn’t help.

Is the brain parasite Toxoplasma manipulating your behavior, or is your immune system to blame?

Toxoplasma gondii parasites, which sexually reproduce only in cats but can infect any animal, hijack the brain and affect the host’s behavior. In a turn of events that would make Charles Darwin smile, rats and mice infected with Toxoplasma behave in ways that make them easy prey for cats – exactly where Toxoplasma wants to go.

Look What the Cat Dragged In: Parasites

The message, Ms. Chalkowski said, is simple: “If you’re a responsible cat owner, you might really want to keep your cat indoors not just because of those things, but now we’re seeing an increase in parasitic risk.”

Toxoplasma ‘cat poo’ parasite infects billions – so why is it so hard to study?

Due to this unique behaviour, Toxoplasma has been widely investigated by parasitologists, biologists and psychiatrists. Researchers have found that the Toxoplasma parasites may affect human behaviour and personality, for example. Studies have also suggested a link with schizophrenia and bipolar disorder.

A recent study has identified which strains of a common parasite carried by cats is killing sea otters along the coast of California. Sewage treatment facilities are unable to kill or remove these environmentally-resistant oocysts from treated water, so they end up in coastal waters where marine mammals can ingest them in contaminated food or water.

How Worried Should Cat Owners Be About Toxoplasmosis?

The only people who face a risk from Toxoplasma gondii are pregnant women who have not previously been infected, babies under 6 months old and any household member whose immune system has been weakened by cancer treatment, transplant therapy or an infection like H.I.V.

This cat-poop parasite can change your brain, but it probably won't make you an entrepreneur

The infection is asymptomatic in most people, so although immune-compromised individuals, pregnant women, and infants are at risk of developing fatal toxoplasmosis most people go through life never knowing they have a parasite. Studies do suggest that there are subtle changes in behavior amongst T. gondii hosts, but it's been difficult to pin them down.

A Game of Cat and Mouse

There is tantalising evidence that a common parasite may affect human behavior.

They may have been worshiped as gods in ancient Egypt, but in today's modern world, cats, and more specifically their poop, may just be another culprit of parasitic disease transmission, an issue that scientists now identify as an ever-growing public health concern...

How Your Cat Is Making You Crazy

Jaroslav Flegr is no kook. And yet, for years, he suspected his mind had been taken over by parasites that had invaded his brain. So the prolific biologist took his science-fiction hunch into the lab. What he’s now discovering will startle you. Could tiny organisms carried by house cats be creeping into our brains, causing everything from car wrecks to schizophrenia?

If You Want To Start Businesses, Will This Cat Poop Parasite Help?

What do you need to become an entrepreneur? A good idea? Dedication? Drive? How about some cat poop?

Protozoa Could Be Controlling Your Brain

Some protozoa infect the brain of their host, shaping its behavior in ways most suited to the pathogen, even if it leads to the suicide of the host

While the parasite can be hosted by humans, it requires cats and rodent hosts to live out its full life cycle. Infected rodents lose their fear of cats, thus increasing their chances of being eaten—the parasite then uses the cat’s body to reproduce and spread through its feces. So if you’re feeling a little socially anxious on a Friday night, skip the martini. Just go clean out the litter box and hit the town.

Among other organs, the parasite infects the brain, and it has been blamed for making people more impulsive, and more prone to mental illness, including schizophrenia. The idea of ‘behavioural’ toxoplasmosis has driven a huge amount of research and media interest. But in a new PLoS ONE paper, Duke University researchers Karen Sugden et al. suggest that there may be nothing to worry about after all. They report that toxoplasmosis is associated with essentially no behavioural abnormalities in humans.

We like to think that we are masters of our own fates. The thought that others might be instead controlling our actions makes us uneasy. We rail against nanny states, we react badly to media hype and we are appalled at the idea of brainwashing. But words and images are not the only things that can affect our brains and thoughts. Other animals – parasites – can do this too. According to research by Kevin Lafferty from the University of California, Santa Barbara, a common brain parasite, Toxoplasma gondii, could be influencing human culture across the globe.

Toxoplasma's Dark Side: The Link Between Parasite and Suicide

The idea that this tiny protozoan parasite can influence our minds is old news. Some of the greatest science writers of our time have waxed poetic about how it sneaks its way into our brains and affects our personalities.

Toxoplasmosis & Brain Cancer: Cats Don't Give Disease To Owners After All, Study Shows

Given cats' role as natural T. gondii hosts, the brain cancer finding naturally raised some concern over whether housecats might pass the parasite to humans, increasing brain cancer risk. T. gondii is also linked with neurosis, schizophrenia and suicide attempts.

This parasite completes its life cycle in cats, and they are the only mammals in which this parasite is passed through the feces and into the environment as part of the life cycle. However, contact with raw meat and unwashed produce is also a very significant and well known source of human infection.

Toxoplasmosis: how feral cats kill wildlife without lifting a paw

Feral cats are a huge threat to our native wildlife, hunting and killing an estimated 75 million animals across Australia each and every night. But the killing spree doesn’t end there. There’s a parasite lurking in kitty’s litter that continues to kill wildlife long after the perpetrator has left the scene of the crime. The killer is toxoplasmosis, a disease caused by the parasite Toxoplasma gondii. The parasite is spread by cats but it can infect any bird or mammal. Around one-third of humans worldwide are infected with the parasite. But the deadly effects on our wildlife are often overlooked.

Depending on individual lifestyle and eating habits, a person is just as likely or more likely to be exposed to Toxoplasma from working in the garden or eating undercooked meat (particularly free-range pork or wild game). People who are pregnant or who have a weakened immune system do NOT need to get rid of their cats because of Toxoplasma, but they DO need to take steps to avoid exposure to Toxoplasma from all sources.

CATP is a non-governmental organization devoted to the elimination of Toxoplasmosa gondii and its host. Established in 2008, CATP strives to raise awareness of this infection and the importance of controlling the transmission at the level of the host.

iHaveABrainParasite.com is dedicated to spreading the word and educating people about Toxoplasma Gondii. Given the widespread nature of the parasite and the potential behavioral changes it creates, we firmly believe that this could be the next big global health topic.

Toxoplasma gondii is known to change the host's behaviour. Studies show the capability for the parasite to make rats fearless near cats. This indicates the evolutionary need for Toxoplasma gondii to get inside felines. When a rat is eaten by a cat the parasite gets inside the primary host. There have been a few studies with humans, too. Some results indicate a strong correlation between schizophrenia and toxoplasmosis.

While the parasite is found throughout the world, more than 60 million people in the United States may be infected with the Toxoplasma parasite. Of those who are infected, very few have symptoms because a healthy person's immune system usually keeps the parasite from causing illness. However, pregnant women and individuals who have compromised immune systems should be cautious; for them, a Toxoplasma infection could cause serious health problems.

Toxoplasmosis may cause flu-like symptoms in some people, but most people affected never develop signs and symptoms. For infants born to infected mothers and for people with weakened immune systems, toxoplasmosis can cause extremely serious complications. If you're generally healthy, you probably won't need any treatment for toxoplasmosis. If you are pregnant or have lowered immunity, certain medications can help reduce the infection's severity. The best approach, though, is prevention.

The following situations potentially expose a person to the Toxoplasma parasite and increase the risk of acquiring toxoplasmosis: Touching your hands to your mouth after gardening, cleaning a cat's litter box, or anything that came into contact with cat feces. Eating raw or partly cooked meat, especially pork, lamb, or venison. Using utensils or cutting boards that have not been properly cleaned after they have had contact with raw meat. Drinking raw goat's milk. Touching your hands to your mouth after contact with raw or undercooked meat. Organ transplantation or transfusion (this is rare).

Most warm-blooded animals, including sheep, cattle, dogs and humans, can be infected with this tiny single-celled parasite. However, the parasite can only be passed on if it enters the environment or food chain, or if it passes from an infected mother to her unborn baby (known as congenital toxoplasmosis). Rarely, the parasite can also be passed from human to human through organ transplantation. Although toxoplasmosis is common worldwide, it's not reported that often in the UK.

Toxoplasmosis is caused by Toxoplasma gondii, an intracellular protozoan parasite. Its main host is the cat. It is one of the most common human parasites. Primary infection is usually subclinical but sometimes leads to chorioretinitis, or may damage the fetus if acquired in pregnancy. Reactivation of latent infection can occur in immunocompromised patients and may cause life-threatening encephalitis.