Where in health am I? : Home / Health Cloud / Challenges / Infections / Pediatric / Roseola

Childhood means simplicity. Look at the world with the child's eye - it is very beautiful - Kailash Satyarthi 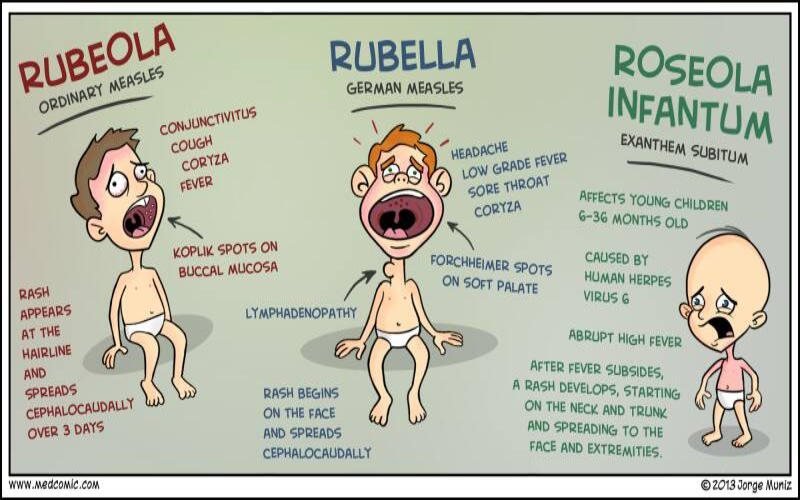 Did your baby very suddenly develop a high fever? And then, just as they seemed to be getting better, they broke out in a rash? They might have the unsightly but common virus called roseola.

Roseola is caused by one of the herpes viruses and it is highly infectious, being passed around by saliva. Your child will be merrily passing it around to anyone they kiss or share a well chewed toy with long before any symptoms show up - it can take between five and 15 days for that to happen.

Roseola is most common in young children aged between nine months and two years and the telltale signs include the sudden onset of a high fever, along…

There is no specific treatment for roseola infantum. The majority of cases of roseola infantum are mild and self-limited. Treatment is supportive with rest, maintaining fluid intake and antipyretics such as acetaminophen or ibuprofen to control the fever. Due to the rash likely being nonpruritic, treatment is unnecessary.

Roseola What a Scare!

Roseola, also known as sixth disease, is a relatively mild disease that generally affects children under two years old. It is characterized by three days of high fever followed by a rash. The rash usually starts in ...

In particular, keep an eye on that fever (temperatures can really soar with roseola) and seek help if you feel it is getting dangerously high. Occasionally, a very high temperature can cause a febrile convulsion, and you should seek medical advice if this happens.

Roseola infantum is a common illness in young children in which they generally develop a fever for 3-5 days (worse at night), followed by the appearance of the typical red rash when the fever disappears. The rash may be present on the upper arms, legs, and face, but is most prominent on the neck and trunk. It consists of numerous, red 2-5mm spots that blanch when pressed. The rash typically lasts for 24-48 hours.

Classic Roseola clues include *child does not look or seem very sick even though they have a high fever *the rash comes out AFTER the fever is gone. Any fever that is lingering longer than 3 days needs to be checked. With Measles back on the horizon, we need to be a little more wary of the fever/ rash combination illnesses. With Measles, the fever and rash may at the same time. The child will look sick.

Most children with roseola develop a mild upper respiratory illness, followed by a high fever (often higher than 103°F or 39.5°C) for up to a week. During this time, a child might be fussy or irritable, not eat as much as usual, and may have swollen lymph nodes (glands) in the neck.

Roseola infantum is a common disease of childhood caused by a primary infection with human herpesvirus 6 (HHV-6) and less frequently, by human herpesvirus 7 (HHV-7). This disease, also known as exanthema subitum and sixth disease, presents in children ages six to 12 months with 90% of cases occurring in children younger than two years.