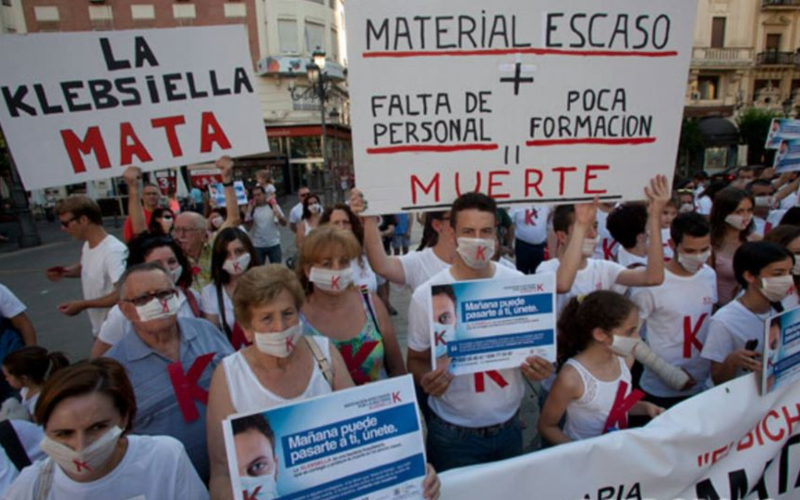 The 'NIH Superbug': This is Happening Every Day

Infections at health care facilities are one of the nation's leading causes of preventable death, claiming an estimated 99,000 lives a year. They're something of a silent killer, as hospitals fearful of lawsuits don't like to publicly reveal when they outfox infection control – yet no hospital is immune...

Normally, the Klebsiella bacteria live in human intestines and don't harm people with healthy immune systems. But the multidrug-resistant strain named KPC has emerged over the past decade to become a fast-growing threat in intensive care units, spreading easily between very ill people and killing half of those it sickens. Worse, people can carry KPC without symptoms unless the germs…

Antibiotic resistance is a growing public health crisis. The Emory study’s focus, Carbapenem-resistant Klebsiella pneumoniae, is among the most common of a group of so-called “superbug” bacteria that are resistant to most antibiotics and kill up to 50% of the people they infect.

Klebsiella pneumoniae is a common bacterium found in the skin, intestines and soil. It causes a range of potentially deadly infections in people with compromised immune systems. As this bacterium is particularly prevalent in hospitals, it’s one of the most critical drug-resistant threats to public health.

Infectious disease experts are calling the emergence of hypervirulent, multidrug-resistant and highly transmissible strains of Klebsiella pneumoniae described in a recent paper by Chinese scientists an alarming and worrisome development that could be a sign of things to come.

Meningitis, pneumonia, deadly diarrhea. Antibiotic developers have long struggled to treat such dreaded diseases because the bacteria that cause them have double cell walls with an outer membrane that is particularly difficult for drugs to penetrate. The only new products to fight such gram-negative bacteria in the past 50 years are variations on existing, already approved drugs. Yet resistance to those classes of compounds is soaring. Now, a team of scientists has created a compound that breaches these bacterial outer membranes in a novel way—and could one day save the lives of people infected with bacteria that today foil every gram-negative antibiotic on the market.

Nightmare bacteria—those that are resistant to almost every drug—are particularly deadly in the elderly and people with chronic illnesses. Up to half of the resulting infections prove fatal, Schuchat said.

Explainer: what is KPC and should I be worried about these superbugs?

The Enterobacteriaceae (pronounced enter-oh-bact-ear-ee-ay-cee-ee) are a large family of bacteria, which largely live as a normal part of people’s healthy gut bacteria. It includes E. coli as well as some more nasty bugs such as Salmonella and Shigella, which cause gastroenteritis. A member of the family that doesn’t get as much press is Klebsiella. It’s a fairly common cause of infections in hospitals, such as urinary tract infections and pneumonia. Different species also live widely in the environment.

Doctors found out that she was infected with a type of carbapenem-resistant enterobacteriaceae, or CRE, superbug called Klebsiella pneumoniae and quickly put her in isolation. Tests showed that the bacterium, which spread throughout her body, was resistant to 26 different antibiotics — or every antibiotic available in the US.

In Ranking of Superbugs, Klebsiella Takes the Lead

In all the latest bad news about bacteria becoming highly resistant – through carbapenem resistance, or the "Indian supergene" NDM-1 – there has been one hopeful thread: All of the organisms have remained susceptible to one very old, little-used drug called colistin. That might be about to change. Which would be very, very bad news.

What Are The 'Superbugs' Known As Carbapenem-Resistant Enterobacteriaceae?

Carbapenem-resistant Enterobacteriaceae is a class of germs that is highly resistant to treatment with antibiotics, according to the Centers for Disease Control and Prevention. Some Enterobacteriaceae are actually a normal part of human gut bacteria, like Klebsiella and E. coli, but experts say the overuse and misuse of antibiotics has been causing some bacteria to become resistant to modern medicine.

The 'NIH Superbug': This is Happening Every Day

A word about the bug: CRKP (covered particularly in this post) is a gut-dwelling bacterium which has acquired the ability to make enzymes that foil the attack of almost every antibiotic used in medicine.

The most common microbes that caused these infections were the bacteria Clostridium difficile (12 percent of infections), the bacteria Staphylococcus aureus (11 percent) and the bacteria Klebsiella (10 percent).

K. pneumoniae is second only to E. colias a urinary tract pathogen. Klebsiella infections are encountered far more often now than in the past. This is probably due to the bacterium's antibioticresistance properties.

Klebsiella pneumoniae and Klebsiella oxytoca are both opportunistic pathogens found in the environment and in mammalian mucosal surfaces; they are commonly passed by hands of hospital personel. Common sites for nosocomial Klebsiella infections inlcude the urinary tract, lower respiratory tract, biliary tract, and surgical wound sites.