Where in health am I? : Home / Health Cloud / Challenges / Infections / Sepsis

Except on few occasions, the patient appears to die from the body's response to infection rather than from it - William Osler, The Evolution of Modern Medicine, 1904 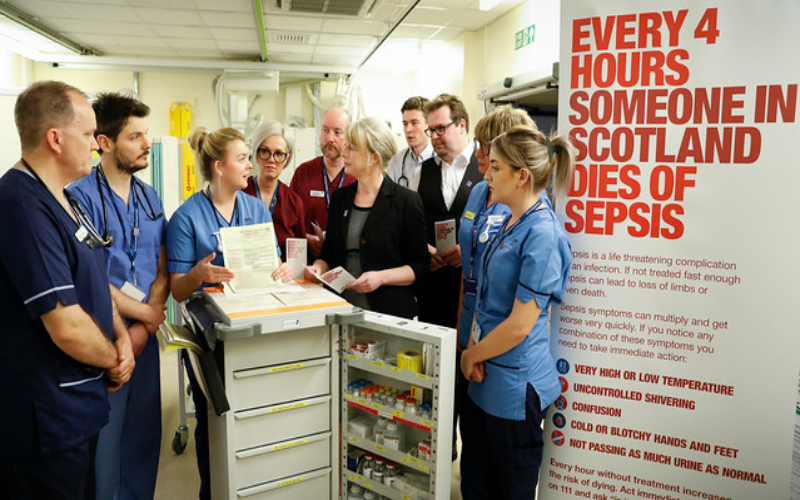 If pharmaceutical and biotech companies gave up trying to find better treatments for stroke and Alzheimer’s disease, there would be public outrage. Yet that is essentially what has happened to sepsis, an infection that kills as many Americans each year — about 250,000 — as stroke and Alzheimer’s combined — with barely a whimper. If we can strive to fight a new scourge like opioids, we should be able to do the same for a much older killer.

Thanks to antibiotics, vaccinations, and public health advances like modern sanitation, it’s easy to think that Americans live largely free of the infectious diseases that once took such a toll. That’s partially right: We effectively prevent…

A Leading Cause of Death You Don't Even Know About

To survive sepsis–the 11th leading cause of death in this country–you need to catch it early. But many patients don't even know what it is.

The latest research seems promising, but the greatest defence we have against sepsis is awareness of the condition in medical professionals and the public. But at the moment awareness is alarmingly low across the world.

As health care systems look to lower costs and improve patient outcomes, controlling sepsis is a great place to start. Ignoring that opportunity is a huge mistake.

Trial by Fire: Critics Demand That a Huge Sepsis Study Be Stopped

A large government trial comparing treatments for a life-threatening condition called sepsis is putting participants at risk of organ failure and even death, critics charge, and should be immediately shut down.

Going over SIRS and septic shock came across this old slide.

Because sepsis, a leading cause of death in hospitals, can at first look like less serious ailments, a campaign to aggressively identify it for early treatment has been undertaken by a consortium of 55 hospitals in the New York region, including NYU Langone.

Sepsis is one of the oldest described illnesses. The term sepsis is derived from the ancient Greek term “σῆψις” (“make rotten”) and was used by Hippocrates around 400 BCE to describe the natural process through which meat decays and swamps release decomposing gases but also through which infected wounds become purulent 3. After this recognition, it took over 2,000 years to establish the hypothesis that it is not the pathogen itself but rather the host response that is responsible for the symptoms seen in sepsis.

Sepsis can send a child to the brink of death within hours. A new coalition of hospitals is fighting back

It might start out looking like not much more than an ordinary childhood fever. But within days — within hours, sometimes — the complication known as sepsis can turn deadly. The patient’s blood pressure dives. Intense pain floods her body. Her organs begin to shut down. The toll is frightening: Sepsis hospitalizes some 75,000 children and teens each year in the United States.

What are septic shock and sepsis? The facts behind these deadly conditions

It can be difficult to distinguish sepsis from other diseases that can make one very sick, and there is no lab test that can confirm sepsis. Many conditions can mimic sepsis, including severe allergic reactions, bleeding, heart attacks, blood clots and medication overdoses. Sepsis requires particular prompt treatments, so getting the diagnosis right matters.

What is sepsis and how can it be treated?

Researchers have now switched their efforts to identifying the molecular mechanisms that lead to the immune-paralysis phase of sepsis. Understanding this better will hopefully lead to the development of new immunotherapies to target the second phase of the condition.

The Surviving Sepsis Campaign (SSC) estimates that the incidence of sepsis is 3 per 1,000 worldwide. It is estimated that there are over 30,000 cases of severe sepsis in the UK every year. There is a steady rise in the number of patients with sepsis. Worldwide there are over 18 million cases per year. Because of its high mortality, sepsis is a leading cause of death. In the developing world, sepsis accounts for 60 to 70% of deaths per year. It kills over 6 million new-borns and children each year and there are over 100,000 cases of maternal sepsis. Each hour around 36 people die of sepsis and over 1.16 million people are affected annually in the US.

Sepsis to Shock: What Happens When Bacteria Invade the Body

Severe sepsis is a common but deadly condition that carries with it a serious risk of mortality. Identifying the condition early is key.

If pharmaceutical and biotech companies gave up trying to find better treatments for stroke and Alzheimer’s disease, there would be public outrage. Yet that is essentially what has happened to sepsis, an infection that kills as many Americans each year — about 250,000 — as stroke and Alzheimer’s combined — with barely a whimper. If we can strive to fight a new scourge like opioids, we should be able to do the same for a much older killer.

The is a non-profit charity organization with the mission to provide global leadership to reduce the worldwide burden of sepsis. The GSA was founded in 2010 with the aim to raise awareness for sepsis worldwide and reduce sepsis deaths by 20 % by 2020.

The mission of the ISF is to improve the understanding and clinical management of patients with severe sepsis.

There is only one true goal for SA and the people who work behind the scenes: raising awareness of sepsis so it can be detected and treated early enough that no harm is done. Currently, every year in the United States, over 200,000 people die of sepsis. That is more people in one year than those who die of breast cancer, prostate cancer and AIDS, combined. SA can’t do it alone and this is where the work comes in.

Spike Out Sepsis is a unique 6-on-6 sand volleyball tournament designed to raise awareness and funds for Sepsis Alliance.

The Surviving Sepsis Campaign (SSC), an initiative of the European Society of Intensive Care Medicine, the International Sepsis Forum, and the Society of Critical Care Medicine, has been developed to improve the management, diagnosis, and treatment of sepsis.

The UK Sepsis Trust exists to fight this life-threatening condition, stop preventable deaths and support those affected by sepsis.

Every year on September 13th, countless events raising awareness of sepsis are organized all over the world. The events range from medical education, to information for lay people, sport activities, fundraising events like pink picnics, and much more.

Is there a sepsia trial near you?

The German Sepsis Society (GSS) is a medical society. Our mission is to educate and increase public and professional awareness about sepsis.

If your infant has a rectal temperature of 100.4Â°F (38Â°C), seems lethargic, irritable, uninterested in eating, or seems to be having difficulty breathing or appears ill, call your doctor right away.

Sepsis is a life-threatening illness. Your body's response to a bacterial infection usually causes it. Your immune system goes into overdrive, overwhelming normal processes in your blood. The result is that small blood clots form, blocking blood flow to vital organs. This can lead to organ failure. Babies, old people and those with weakened immune systems are most likely to get sepsis.

Sepsis and septic shock must be treated immediately with antibiotics–even before test results confirm the diagnosis. A delay in antibiotic treatment greatly decreases the chances of survival. People with symptoms of septic shock are immediately admitted to an intensive care unit for treatment.