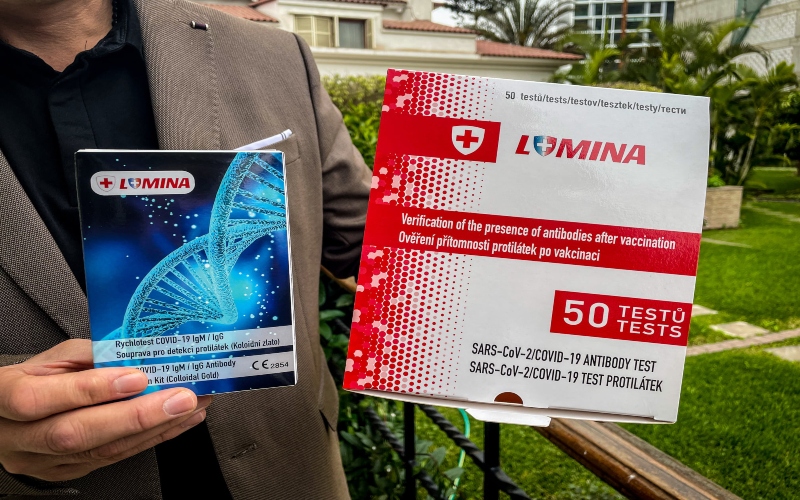 As governments in Europe and elsewhere start to look at reopening their economies after the first wave of the Covid-19 pandemic, mass antibody testing has come to the fore as a potential way of making sure the outbreak doesn’t surge again.

These serological tests — which are being rolled out in Italy, Germany and the U.K., as well as New York — can help identify individuals who’ve developed an immune response to the new coronavirus, either as part of an active infection or a prior infection. While it’s an excellent idea to get a better picture of just how widespread the epidemic has been, we should be under no illusion that we will then be able to hand out some form of “immunity certificate” that lets people return to normal lives. Most individuals will probably discover that they haven’t been infected with the virus. Even those who were won’t be certain about how long their immunity will last..

This week, Germany became Europe’s first country to start large-scale antibody tests, one involving blood donations and another focusing on four of the country’s worst-hit regions. Berlin is planning a separate mass test involving 15,000 people in 150 areas, starting next month. Italy is setting up a serological test of 150,000 individuals, and some of its most affected areas have already started running these examinations. Britain has started contacting 20,000 households to take part in a similar mapping effort..

These studies will be critical to understanding the impact of the virus. For example, we now estimate that about seven in 100 of those who tested positive for Covid-19 worldwide has died. Yet we also know that our health systems have failed to detect a large proportion of carriers who either have few symptoms or are asymptomatic. A mass testing in the Italian town of Vo’ Euganeo, in the northeast of Italy, found more than 40% of those infected had no symptoms. It’s highly probable that once we know the real prevalence of the virus, its fatality rate will plummet..

There’s also hope that a mass test will show we are getting closer to “herd immunity” — where outbreaks stop because enough people have developed antibodies. But there’s not much ground for optimism on this point. We simply don’t know how effective antibody protection is and how long it will last. The virus has circulated among the human population for just a few months, so not enough time has passed to draw a conclusion..

Moreover, some early studies in Germany, Sweden and Italy found that even in the most severely affected regions only about 10% to 15% of the population had been infected. Data from the U.S. showed that about 13.9% of New York state’s population has been in contact with the virus, including 21% in New York City. Other studies, including one from California, delivered more promising results, but that was likely the result of imperfect testing. This all leaves us far from the 60% infection rate that’s seen as the lower bound to “herd immunity.”.

Companies are particularly interested in immunity, as they hope it will allow some workers to return if they’ve already had the virus. In theory, this would create enormous ethical dilemmas and might prompt some individuals to seek contagion voluntarily in the hope of becoming more attractive to employers. This would be especially true among poorer and younger people (the latter have a lower chance of dying of Covid-19)..

In practice, however, the extent of the infection is probably still too small for the antibody testing to be of great use to businesses wanting to reopen. Moreover, a serological test won’t tell you whether an individual is incubating the virus or if and when they will lose their immunity. And many commercial tests are still far from the level of accuracy one would need to be confident. As a result, some tend to overestimate the outbreak’s spread. Far from making a company safer, relying excessively on immunity tests could give a false sense of security..

The Covid-19 epidemic is taking a huge toll on the global economy, so it’s natural that workers and companies are looking for a simple solution. However, just as the current mouth-swab tests (which determine whether you’re actively infected) are helpful but cannot beat the virus on their own, serological tests also have limitations. As we wait for more effective treatments and — perhaps — for a vaccine, social distancing remains the best tool to fight the pandemic..

While it could be tempting to consider these tests a measuring stick of your immune response — or lack thereof — researchers and doctors say your protection against the virus still can't be boiled down to antibody levels in a simple blood test.

New Test Can Show If You’ve Had COVID-19, Even If Antibodies Fade

This test could show how many people have really had COVID-19, as well as information on how long immunity lasts and how well vaccines are working. A T cell test for COVID may help provide a retroactive diagnosis for people who may be suffering the long-term effects of SARS-CoV-2 — and with it, a sense of clarity and closure.

I tested positive for Covid-19 antibodies — what now?

For one thing, Covid-19 antibody tests are designed to measure if someone’s been exposed to the virus, not to answer questions about their future immunity. Some of the tests, including the Abbott one I got, don’t even probe for the types of Covid antibodies whose ability to help fight the virus is the most established.

They cannot really measure how strong your COVID immunity is.

Among New Coronavirus Antibody Tests, Limited Value and Many Unknowns

Many tests for detecting past infections are reaching patients with their reliability unproven and with much still left to learn about Covid-19 immunity.

Should You Get an Antibody Test?

I would recommend it, but only if you’re part of a research study where your results are contributing to an understanding of what results actually mean.

The FDA Is Now Admitting It Let Fake Coronavirus Antibody Tests Into the U.S.

“We unfortunately see unscrupulous actors marketing fraudulent test kits and using the pandemic as an opportunity to take advantage of Americans’ anxiety,” the FDA said in a statement.

After Recovery From the Coronavirus, Most People Carry Antibodies

A new study adds to evidence of immunity among those who have already been exposed to the pathogen.

Among New Coronavirus Antibody Tests, Limited Value and Many Unknowns

Many tests for detecting past infections are reaching patients with their reliability unproven and with much still left to learn about Covid-19 immunity.

Coronavirus Antibody Tests: Can You Trust the Results?

A team of scientists worked around the clock to evaluate 14 antibody tests. A few worked as advertised. Most did not.

COVID-19 tests are far from perfect, but accuracy isn’t the biggest problem

Here’s what all those false positives and negatives really mean.

Everything We Know About Covid-19 Antibody Tests (So Far)

Should you take a test, and what does it mean for immunity? You’ve got questions, but we’ve got … more questions.

How reliable are they? How can (and should) you get them? We answer the most important questions.

Health departments, hospitals and companies around the world are rolling out the next wave in coronavirus tests, which look in a person’s blood for signs of past infection, in hopes of better gauging how widespread the pandemic is and who might be counted among the recovered.

How (Not) to Do an Antibody Survey for SARS-CoV-2

Preprints from the first round of seroprevalence studies indicate that many more people have been infected with the virus than previously reported. Some of these studies also have serious design flaws.

I Kind of Regret Getting an Antibody Test

It was easy to get one. It was difficult to take any meaning from it.

Roche’s test was approved at the start of May by the EU and by the Food and Drug Administration in the USA as being 99.8% specific for Covid-19 – so it is not confused by antibodies against other coronaviruses which cause colds – and 100% sensitive, so it will pick up any antibodies that are present. It will work on blood samples taken by a healthcare professional at least 14 days after the person developed Covid-19.

The False Hope of Antibody Tests

The immunity tests were supposed to be a “game changer,” but they are instead revealing that the majority of Americans are still vulnerable to COVID-19 infection.

Your immune system is like a beautifully complex orchestra. It plays two movements.

Why can’t we use antibody tests for diagnosing COVID-19 yet?

It’s difficult to craft a test that is specific enough to detect just SARS-CoV-2 (the virus that causes COVID-19), and not other similar viruses.

Why even a super-accurate Covid-19 test can fail

The trend that we’re starting to see [with rapid tests] is that there is inconsistency in many of [the manufacturers’] claims.

Antibody checks will provide a handy picture of the Covid-19 outbreak, but their usefulness will be limited in ending the lockdowns.

T-Detect COVID correctly confirmed recent or prior COVID-19 infections 97.1% of the time from date of RT-PCR diagnosis with 100% specificity