It’s a genuine public health conundrum. A mandate needs to lead to more people getting the shot than otherwise would, not fewer - German Lopez 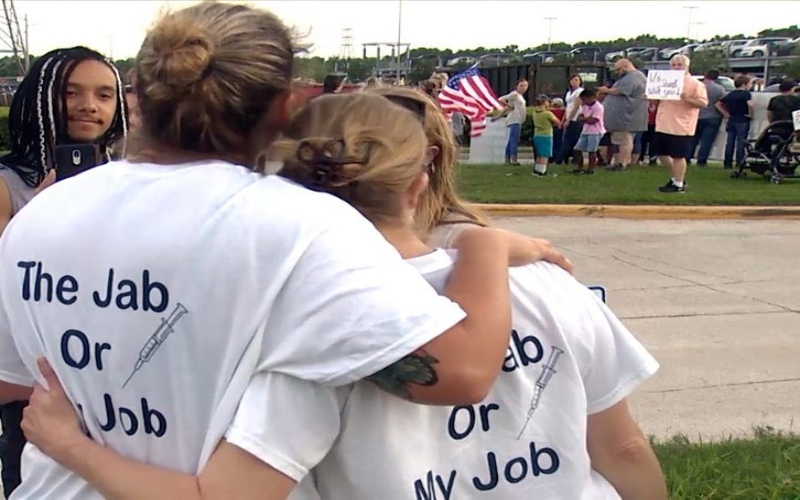 image by: of today

Countries like the UK and the US have libertarian roots and value individual freedom. Those against mandatory vaccinations are not necessarily anti-vaxx or even unvaccinated. Rather, some are legitimately concerned about the mission creep of government and employers infringing into personal lives. But where do we draw the line between individual freedom of beliefs and the rights of others? You can choose not to wear a seatbelt and if you crash, you might die. But being unvaccinated and returning to a crowded workplace not only means you are driving without a seatbelt, but it removes the seatbelt of those around you. It exposes that 12-year-old who hasn’t been offered the vaccine, the young waiter who hasn’t had her second jab yet and the delivery driver who cannot be vaccinated for medical reasons.

There are precedents for mandatory vaccination programmes. New medical staff carrying out certain procedures are required to prove they are non-infectious for hepatitis B, C and HIV and are offered a hepatitis B vaccination. The US and Australia have long mandated vaccination for entry into school to increase and sustain vaccination rates. In 2016, six months after the Australian government brought in the “no jab, no pay” policy (no vaccination, no family tax benefits), there were record highs of vaccination of young children in previously hard-to-vaccinate groups. But financial disincentives are not always effective since many objectors have relatively high socioeconomic resources.

When France and Italy faced a measles outbreak, they made childhood vaccinations mandatory in 2017-18, although the Italian mandate was later repealed. A recent study found that mandatory vaccine policies for preventable diseases such as measles increased uptake and lowered measles incidence. In countries with no option for non-medical vaccination exemption (for example no ethical anti-vaccination clause), the incidence of measles was significantly lower.

Another consideration before implementing any kind of mandatory programme here in the UK would be the extent of the problem the solution is trying to address: we don’t want to use a metaphorical sledgehammer to crack a walnut. A recent study found that the UK has the highest vaccine confidence internationally at almost 90%. In a Royal Society report, we mapped seasonal flu vaccine uptake among healthcare workers in England in 2019-20. Around 75-80% of frontline workers, doctors, nurses, clinical and support staff were vaccinated, but in some smaller trusts, levels were only 40% even among doctors, and lower still among support staff.

These are all considerations that apply as much to the private sector as to the public. Goldman Sachs told US workers they must disclose their vaccination status to their managers. The publisher Bloomsbury will make vaccines compulsory for UK staff. As those able to work from home begin to contemplate their return to the office, it may prove unfeasible for private sector companies to demand mandatory vaccinations for employees.

Although many US companies are enacting these rules, according to English law, telling a member of staff they may be dismissed if they are not vaccinated could constitute unfair dismissal. An employer needs to provide a good reason for dismissal and it seems unclear whether vaccination constitutes a good enough reason. At the same time, employers must abide by health and safety requirements. If a workspace is cramped, with employees in close proximity to others, or unventilated, could vaccination be an effective safety measure to ensure the protection of those employees? These are opposing considerations employers must address.

Employers could also face a discrimination claim. Some workers might have legitimate medical grounds such as an allergy preventing them from being vaccinated. Employers have the duty of reasonable accommodation to protect that person. There are also younger age groups patiently waiting to get their first or second jab. Given that young employees populate some sectors, such as hospitality, this is not a trivial point.

Perhaps the thorniest issue of all is that discrimination claims can be made not only on medical grounds, but also on philosophical beliefs. An employment tribunal recently made the ruling that veganism is a philosophical belief protected under the Equality Act of 2010. Could anti-vaxxism be a protected philosophical belief? For a belief to be protected, it has to jump through a series of hoops such as being worthy of respect in a democratic society, compatibility with human dignity, but crucially – not be in conflict with the fundamental rights of others. Legal experts need to mull over whether anti-vaxxism could in some circumstances be a protected philosophical belief like veganism if someone is not hired or dismissed because of their vaccination status – or whether it conflicts with the fundamental rights of others and public health.

Even if it is possible and it works, should employers make vaccination mandatory? Or is a carrot more effective than a stick? Instead of always bringing out the stick, it might be more effective to cultivate carrot policies. Remember that we struggle to assess our own risk, from overestimating our risk of a blood clot to keenly buying lottery tickets. Experiments in the US found that giving someone a date, time, convenient location and saying “this vaccine is personally reserved for you” has improved results in terms of vaccinate uptake. Building carrot policies and incentives to help workers understand why vaccination protects might be more effective than the mandatory stick, while we cannot forget that the central crux of the vaccination conundrum is this: protecting the fundamental right of one might endanger the wellbeing of another.

Vaccine mandates have worked in the past. Can they overcome modern hurdles?

The public health directives are older than the U.S. itself. But it's unclear whether they will be effective at driving up COVID-19 vaccination among the nation's 80 million resistant adults.

Requiring people to get their shots can stop Covid-19, but those rules have to be doable and equitable.

Of Vaccine Mandates and Facing Reality

The point is that most vaccine resistance isn’t about deep concerns, but it often involves assertions of the right to give (misguided perceptions of) self-interest priority over the public interest.

The Only Way for the U.S. to Reach Herd Immunity Is With COVID-19 Vaccine Mandates

Rather than carrots, reaching herd immunity is likely to require the use of sticks: vaccine mandates.

Biden Going Nuclear, Will Mandate Vaccines (or Testing) for Most Private Employees

If you’re going to have to put up with the political opposition calling you the Hitler of vaccines regardless, President Joe Biden appears to have reasoned, you might as well also get the benefit of curtailing the pandemic by putting vaccine requirements in place:

So it seems like a good moment to point out the very simple reasons why Biden’s move is in fact entirely sensible, especially since parts of the media seem intent on framing the whole thing as just another round in America’s culture war rather than an actual matter of life and death. (Here’s looking at you, Mike Allen.)

It's likely we'll see more vaccine requirements put in place now that there is one vaccine with full FDA approval.

You can oppose government mandates but still favor mass vaccination.

Have we forgotten the concept of public health? Taking an action because it is the right thing to do, for the health of the community, the country, the world. More people vaccinated will definitely save lives. Why are we talking about individuals having the right to make a choice that seriously affects the health of all?

Nations weigh mandates and incentives to drive up vaccination rates

The coronavirus pandemic has exposed economic and social fault lines around the globe, but Covid-19 vaccines have made the divides even starker: While some poor countries are pleading for doses to save their people, a few rich ones are awash in shots and lacking takers.

Should the Government Impose a National Vaccination Mandate?

Despite claims to the contrary, there are many routes to legally requiring COVID inoculation.

"Get vaccinated!" the president said in a live address to the nation, warning of a new coronavirus surge fueled by the fast-spreading delta variant. Many French people got the message loud and clear. On Monday, 926,000 people booked their first dose through the online medical platform Doctolib — "an absolute record," the site says. Hundreds of thousands more have continued to book slots on Tuesday. Vaccination, Macron said, is "the only path to return to normal life." He called it "our collective shield."

Students weigh the pros and cons of their colleges’ vaccine rules.

Haunted by Past Virus Surges, California Leans on Masks and Vaccines

A new indoor mask requirement in Los Angeles County comes as new virus cases have nearly tripled statewide. Immunization rates, however, should keep any spike below past peaks.

Is It Legal For Employers To Mandate COVID-19 Vaccinations?

Vaccinations are on the rise in the U.S., and some employers are thinking about how and when to bring people back to work. But what about those employees who won't get the vaccine? Can they be forced to do so?

Mandate the vaccine, not masks

Vaccines are the solution to Covid-19. Let’s make the most of them.

It’s time to get serious about vaccination. If we have a checkerboard of communities across America without adequate uptake of Covid-19 vaccines, we will never stem the pandemic.

Should Covid Vaccines Be Mandatory?

Trying really to incentivize people to get vaccinated, I think, is going to be a much more popular route than mandates - Nancy Rothbard

These People Should Be Required to Get Vaccinated

We need to sharply reduce coronavirus infections to turn the tide and quell the pandemic. The best hope is to maximize the number of people vaccinated, especially among those who interact with many others and are likely to transmit the virus. How can we increase vaccinations? Mandates.

Some even view vaccine mandates as un-American, but they are part of our foundational fabric. During the Revolutionary War, inoculation against smallpox was common in Europe. Because of this, the British Army was largely safe from the disease, but the colonists’ army was not. Mandates still aren’t popular; few public health measures are. But they work.

Are companies meddling in workers’ choice and behavior? Of course they are. You might even say it’s their core competency.

Why Is Russia’s Vaccination Rate So Low?

If the Russian government becomes more transparent about COVID data and more consistent while introducing anti-COVID restrictions, it might help to fight vaccine hesitancy. Otherwise, mandates might only contribute to the impression that the government is hiding something and citizens will end up cheating, which won’t help anybody.

Why the US president can’t mandate a Covid-19 vaccine

But despite his pledge to get the pandemic under control, there’s one key lever the Biden won’t be able to pull: A vaccine mandate. The US president has never been able to impose a federal mandate of vaccines across the country, and that won’t change anytime soon. “It goes back to the fact that the federal government is one of limited power,” says Dorit Reiss, a professor specializing in healthcare law at the University of California Hastings College of the Law.

With workplace vaccine mandates in the offing, opponents are turning to a tried-and-true recourse for avoiding a covid-19 shot: the claim that vaccination interferes with religious beliefs.

Why suggesting mandatory Covid vaccinations is an ethical minefield

Countries like the UK and the US have libertarian roots and value individual freedom. Those against mandatory vaccinations are not necessarily anti-vaxx or even unvaccinated.