Vaccines are still beating the variants, but the unvaccinated world is being pummeled - Ed Yong 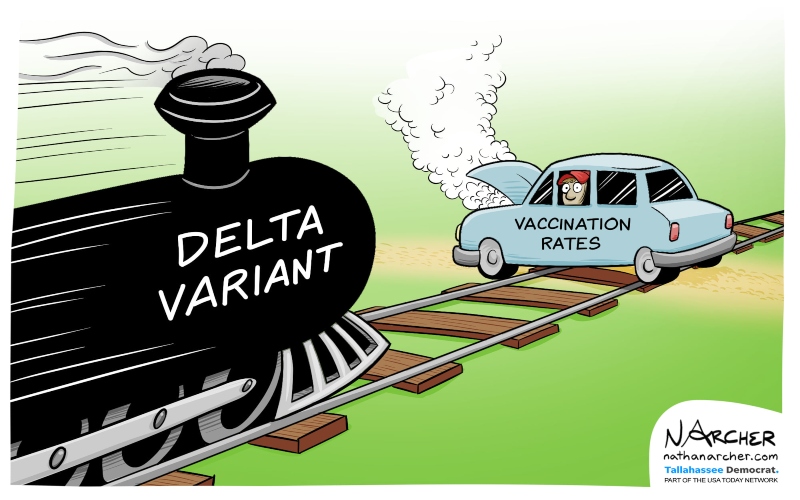 You read the same alarming headlines every few months, now with Greek letters. As the virus that causes Covid-19 evolves and mutates, the same concerns pop up about whether the variant evades vaccines, makes people sicker than the old versions, and increases transmissibility. What we know about the Delta variant is reassuring.

One of the most important questions is whether vaccines are still working well. The best way to answer that is to look at the number of vaccinated people getting serious Covid-19 symptoms or being hospitalized. A new study from the U.K. found that vaccines are still incredibly effective at preventing serious illness with the Delta variant circulating. The Pfizer vaccine was 96% effective after two doses at preventing hospitalization, meaning the average unvaccinated person in the study was more than 25 times as likely to be hospitalized with Covid as the average vaccinated one. (This almost certainly understates the protectiveness of the vaccine, as the vaccinated cohort was older and had a higher incidence of pre-existing conditions than the unvaccinated one.) The Johnson & Johnson vaccine produces strong neutralizing antibodies and cellular responses against the Delta variant, still present eight months after administration.

Studies from Canada and the U.K. show 79% to 87% effectiveness against symptomatic infection with the Delta variant. On July 8 the Centers for Disease Control and Prevention and the Food and Drug Administration asserted their confidence in the vaccines. They jointly announced that no boosters are necessary at this time.

This is all excellent news, as is the finding that 99% of hospitalizations for Covid-19 are among unvaccinated people. The vaccines are as good as first heralded, even against new variants. That unvaccinated people are still being hospitalized underscores the continuing need to get as many people vaccinated as possible. That will also protect children under 12, who aren’t eligible for vaccines. Cases in kids have fallen in places with high vaccination rates among adults and adolescents.

The human immune system truly is more clever and flexible than most people realize. Vaccines generate memory B cells that allow them to produce adapted antibodies toward a range of variants should they ever encounter them. Data from the La Jolla Immunology Institute and the University of California, San Francisco show that T-cell responses provoked by the vaccines are strong against known variants. If you choose a two-shot regimen such as Pfizer or Moderna, getting both shots is still important, as the booster may be necessary to recognize a range of variants.

A second question is whether a particular variant is making infected people sicker. This question is answered fairly easily by looking at publicly available data from the CDC and comparing hospitalizations per case, particularly in regions where a new variant is more common. We analyzed these CDC data and found that the hospitalization data support none of the alarming headlines suggesting Delta is more dangerous than earlier strains.

Hospitalization data are a key to understanding the overall risk for two reasons. They tell us whether healthcare systems are overwhelmed, and they predict deaths with high reliability. Positivity data are less reliable, especially the relationship between infection and hospitalizations becomes weaker in highly vaccinated countries like the U.S. We conducted similar analyses in April, when headlines were raging that the U.K. variant, now called Alpha, was driving surges in kids. We found that it wasn’t, and that juvenile hospitalizations weren’t rising in places with a high prevalence of the Alpha variant.

In the U.S. overall, hospitalizations fell consistently from their daily peak in early January of 133,214 to an average of about 12,000 in late June and early July. In the past few weeks, however, hospitalizations bottomed out and are rising in places with low rates of vaccination and low levels of natural immunity. Hospitalizations in children have been consistently low since the first domestic Covid-19 case was found in February 2020, and they haven’t increased since Delta emerged.

The hardest question to answer is transmissibility, because it isn’t possible to conduct controlled trials comparing how many people get infected with a particular variant. Using data about prevalence of a given variant as a proxy for transmissibility is an unsound approach, because evolutionarily fitter versions of Covid-19 will swamp other versions and outreplicate them. They may well be more infectious or they may only be better at reproducing themselves in an infected person’s body—we have no reliable way of knowing. The effect is the same: Delta is well on its way to becoming the dominant strain in the U.S.

So far, as we march through the variant alphabet, none of the predicted doomsday scenarios in virulence or vaccine resistance have come to pass. If that changes with a future variant, we will know quickly, because data on hospitalizations are readily available. Anyone can go to the CDC website or the state health department and see whether hospitalizations are rising.

“In baseball you don’t know nothing,” Yogi Berra observed. But we need to stop acting as if we know nothing about Covid-19. Every variant that has come along has produced unwarranted panic. We have to work harder to get people vaccinated, given that almost every American death from Covid-19 is tragically preventable, that world-wide vaccination is paramount to tamp down transmission and stop future variants, and that saving lives everywhere is the right thing to do.

How the delta variant is altering the course of the pandemic

The delta variant has made Covid-19 more dangerous than ever for unvaccinated people.

New delta variant studies show the pandemic is far from over

The variant is not only more contagious than earlier strains, it also makes people sicker. And even vaccinated people can get infected and house similar levels of viral particles in their noses as unvaccinated people, raising concern about the vaccines’ ability to curb transmission, new data indicate. But experts caution that there’s more to infectiousness than just those viral levels in the nose.

The Delta variant is more transmissible than the viruses that cause MERS, SARS, Ebola, the common cold, the seasonal flu and smallpox, and it is as contagious as chickenpox...

With The Delta Variant Spreading Fast, Is It Time To Mask Up Again?

"This is becoming a pandemic of the unvaccinated," said CDC Director Dr. Rochelle Walensky at a briefing Friday. "If you remain unvaccinated, you are at risk."

Coronavirus delta variant: What you should know

The novel coronavirus is, unfortunately for us, good at doing what viruses do best: mutating in order to become more efficient and infect more people. The delta variant, a strain first documented in India, has caused devastation in the country and is now the dominant strain in the US and many other countries.

The 3 Simple Rules That Underscore the Danger of Delta

Vaccines are still beating the variants, but the unvaccinated world is being pummeled. This is the first pandemic in history in which scientists are sequencing the genes of a new virus, and tracking its evolution, in real time—that’s why we know about the variants at all. The WHO’s decision to name variants after the Greek alphabet means that at some point, we’ll probably be dealing with an Omega variant.

From New Delhi, the variant has quickly spread, and it now looks set to sweep the globe in what could be a devastating new wave.

Expect the Unexpected From the Delta Variant

There’s no way of knowing how bad things will get in the U.S. In a way, that’s a luxury.

Vaccines ‘outpaced by variants’, WHO warns, as Delta now in 98 countries

“We need everybody vaccinated now. We are not all protected until the whole world is protected. It can come across as idealism, but it’s not – there’s a cold-hearted, self-interested motivation behind all of it.”

What We Know About the Dangerous Delta Variant

The Delta (B.1.617.2) coronavirus variant originally discovered in India last December has now become one the most — if not the most — worrisome strain of the coronavirus circulating globally.

Why is Delta such a worry? It’s more infectious, probably causes more severe disease, and challenges our vaccines

Scientists have identified more than 20 mutations in the Delta variant, but two may be crucial in helping it transmit more effectively than earlier strains. This is why early reports from India called it a “double mutant”.

You may have heard that the delta variant of the coronavirus is more transmissible than other strains, that it’s responsible for the catastrophic outbreak in India, that it’s spreading so fast in the U.S. it will soon become the dominant strain here. But Dr. Monica Gandhi wants you to rethink all that.

The Reassuring Data on the Delta Variant

“In baseball you don’t know nothing,” Yogi Berra observed. But we need to stop acting as if we know nothing about Covid-19. Every variant that has come along has produced unwarranted panic. We have to work harder to get people vaccinated, given that almost every American death from Covid-19 is tragically preventable, that world-wide vaccination is paramount to tamp down transmission and stop future variants, and that saving lives everywhere is the right thing to do.

5 Things To Know About the Delta Variant

For the first time in more than a year, we’re feeling some hope—or at least cautious optimism—that the pandemic could recede to the background. But experts want us to know that there is still a concern that new mutations of the virus could bring it back, and it might be even stronger.

The U.K.’s Delta Surge Is Collapsing. Will Ours?

And while there still may be some rise in deaths in both the U.K. and the Netherlands, given the lag between infection and ultimate outcomes, in neither country have deaths reached even one-fifteenth of the level of the local winter surge. In the U.K., they had almost as many new daily cases as they’d had in January; in the Netherlands, even more. Can we count on precisely the same pattern unfolding here? The causes of the sudden case declines in those two countries are murky,