Where in health am I? : Home / Health Cloud / Challenges / Infections / Zoonoses / Brucellosis

Food safety involves everybody in the food chain - Mike Johanns 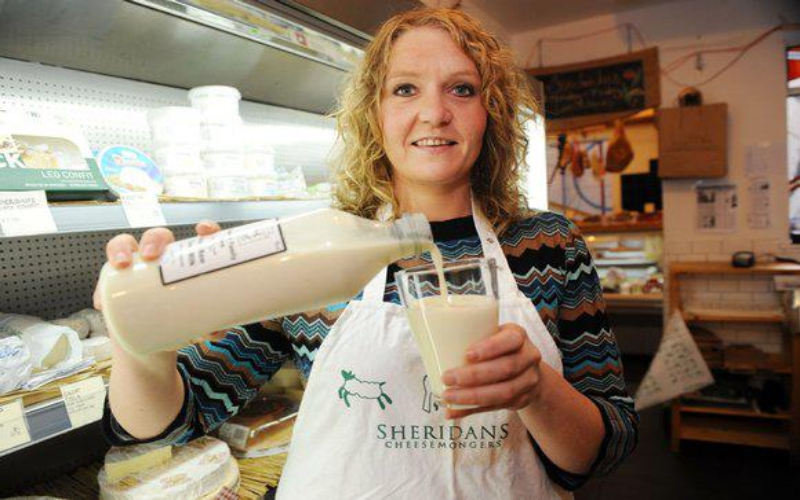 I note the ruckus over raw milk. Sorry, but I wouldn’t touch raw milk with a 10-foot straw. I wouldn’t drink it, I wouldn’t eat it as cheese and I wouldn’t take a bath in it, either.

Nothing personal, but I don’t believe claims that pasteurizing milk destroys its nutritional value or that it’s a conspiracy of big agribusiness and big government to promote the interests of big pharma.

I see pasteurization of dairy products as a blessing. It prevents our return to a dreadful past in which diseases transmitted by raw milk afflicted hundreds of thousands every year. In fact, they still do in many parts of the world where people can’t get pasteurized dairy products.

Brucellosis remains a neglected disease in the developing world: a call for interdisciplinary action

In regions where the disease is endemic, brucellosis has far-reaching and deleterious effects on humans and animals alike. Deeply entrenched social misconceptions and fear of government intervention contribute to this disease continuing to smolder unchecked in most of the developing world, thereby limiting economic growth and inhibiting access to international markets.

Bacteria of the genus Brucella cause brucellosis, one of the world’s neglected zoonotic diseases. It is a disease of poverty; infections of livestock have a huge socioeconomic cost while human brucellosis starts as a debilitating acute infection that can be come chronic with many complications. The figure of 500 000 new human cases each year is regularly cited in reviews and research papers, however this is a vast under estimation; many of the most affected countries do not have the infrastructure for diagnosis and the broad spectrum of symptoms are shared with other febrile infections.

When you buy milk, it is almost always pasteurized. It's been heated to 145 degrees Fahrenheit to kill any harmful pathogens. That is the standard that some customers no longer want. Mary Childs from NPR's Planet Money podcast reports on people who want their milk unpasteurized, raw.

An Overview of Brucellosis in Cattle and Humans, and its Serological and Molecular Diagnosis in Control Strategies

Brucellosis is one of the most common contagious and communicable zoonotic diseases with high rates of morbidity and lifetime sterility. There has been a momentous increase over the recent years in intra/interspecific infection rates, due to poor management and limited resources, especially in developing countries. Abortion in the last trimester is a predominant sign, followed by reduced milk yield and high temperature in cattle, while in humans it is characterized by undulant fever, general malaise, and arthritis.

Brucellosis, also known as Bang’s Disease, is still a topic of discussion in Vermont. Although Vermont was declared brucellosis-free decades ago, this zoonotic disease remains on the collective radar of the Agency’s animal health office personnel because some Vermont cattle herds are still routinely vaccinated and positive animals are still found in other parts of the country.

Consider brucellosis. It’s a nasty, debilitating chronic disease that’s transmitted from cattle to humans. The symptoms include fever, anorexia, fatigue, headaches, depression and weight loss. It’s often confused with malaria or typhoid. It was a candidate for engineering as a biological weapon during the Cold War.

The Brucellosis Vaccine Prize, a US $30 million prize competition, invites vaccine developers ("Solvers") to submit their proposals for - and ultimately develop - a suitable vaccine that is efficacious, safe and viable for use against Brucella melitensis in small ruminants across the developing world.

Brucellosis is found worldwide but it is well controlled in most developed countries. Clinical disease is still common in the Middle East, Asia, Africa, South and Central America, the Mediterranean Basin and the Caribbean.

Brucellosis is an infectious disease caused by bacteria. People can get the disease when they are in contact with infected animals or animal products contaminated with the bacteria. Animals that are most commonly infected include sheep, cattle, goats, pigs, and dogs, among others.

After an incubation period of five to 60 days, symptoms may appear either acutely or insidiously. Untreated, the disease may become chronic. The various symptoms are both general (fever, weakness, joint pain) and organ-specific (including infections in the brain infection and heart valves). Untreated, brucellosis can lead to death. Prolonged antibiotic treatment is usually effective.

Brucellosis is a bacterial infection that spreads from animals to people — most often via unpasteurized milk, cheese and other dairy products. More rarely, the bacteria that cause brucellosis can spread through the air or through direct contact with infected animals.While brucellosis is uncommon in the United States, the disease affects hundreds of thousands of people and animals worldwide. Avoiding unpasteurized dairy products and taking precautions when working with animals or in a laboratory can help prevent brucellosis.

Brucellosis has been described as long as 2,000 years ago, and the organisms finally were identified in 1887; the disease is worldwide and usually confined to animals. Because the bacteria can be aerosolized, it has been designated as a potential biologic weapon.

Brucella can infect cattle, goats, camels, dogs, and pigs. The bacteria can spread to humans if you come in contact with infected meat or the placenta of infected animals, or if you eat or drink unpasteurized milk or cheese.

In mainland Britain, brucellosis has effectively been wiped out from cattle, goats, sheep and pigs through the vaccination of animals, the test and slaughter of infected herds and the pasteurisation of milk. However, brucellosis is still a problem globally – it's the most common bacterial infection spread from animals to humans worldwide.

The disease was first described in Hippocrates' time, although the organism was not isolated until 1887 when a British Army physician, David Bruce, isolated the organism from the spleens of five patients with fatal cases on Malta. The disease gets its names from both its course (undulant fever) and location (Malta fever, Crimean fever).

Brucellosis is a disease of mainly cattle, swine, goats, sheep and dogs. The infection is transmitted to humans by animals through direct contact with infected materials like afterbirth or indirectly by ingestion of animal products and by inhalation of airborne agents. Consumption of raw milk and cheese made from raw milk (fresh cheese) is the major source of infection in man. Most of the fresh cheeses are sheep and goat cheese.