Where in health am I? : Home / Health Cloud / Challenges / Infections / Zoonoses / Chikungunya 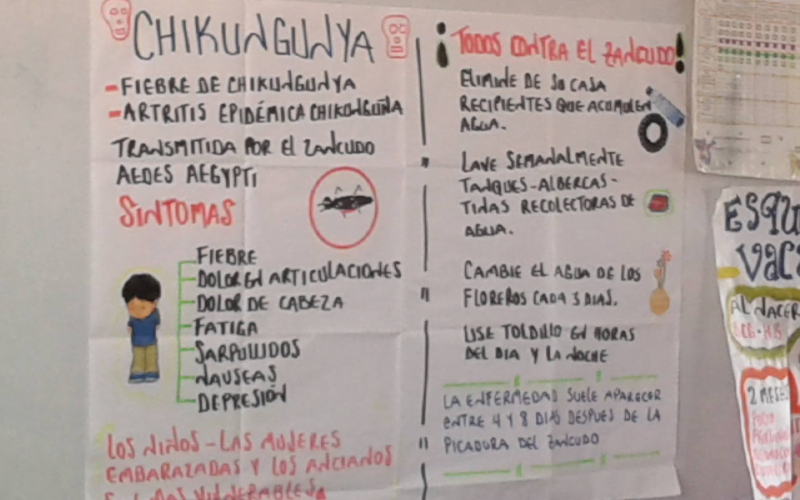 Wondering why a humorist (I loosely include myself in that category) would want to blog about a painful tropical disease like Chikungunya? Why would I make snarky comments about a mosquito-borne virus that's sneaking into Florida from the Caribbean and freaking out health officials like it's the Bubonic plague?

Normally I would say for money, but that's a bit of an understatement. Most bloggers are lower on the pay scale than a snake's belly. I've decided, though -- so as not to disregard Chikungunya's dangers -- to promote awareness about this so-called epidemic that officials say is being downplayed by the media.

What has me smacking…

In 1952, a new and unusual virus was reported in southern Tanzania on the Makonde Plateau. The viral illness caused sudden fever, rash, and joint pain that could last for months. Sometimes causing victims to hunch over due to the aches, the virus was called chikungunya—meaning “bent over in pain” in the local Makonde language. The virus is rarely fatal, but symptoms can last for a few days. It has no vaccine or antiviral treatment. For the next 50 years, chikungunya was largely dormant, with only a few small outbreaks and sporadic cases. But then it made a large-scale resurgence

Our Bout With The Dreaded Chikungunya

While this was a nasty virus and I wouldn’t wish it on my worst enemy, we’re happy that we didn’t have it as bad as so many other suffering people in Africa, Asia and the Caribbean.

The Inconvenient Immigration of Chikungunya

Immigration has become a major point of discussion of late. While human manifestations have grabbed most of the headlines, there is another microbial migration happening that has been met with little reaction. This new resident is a virus known as Chikungunya – or CHIKV – and it appears to have found a new home in Florida.

Chikun-What? A New Mosquito-Borne Virus Lands In The U.S.

A year ago, chikungunya didn't even exist in the Western Hemisphere. It was only found in Africa and Asia. But in October, the mosquito-borne illness cropped up on the island of St. Martin. Then it spread like wildfire.

Chikungunya at the Door — Déjà Vu All Over Again?

We now face a new threat posed by the unrelated chikungunya virus, which causes a disease clinically similar to dengue in a similar epidemiologic pattern, which is transmitted by the same mosquito vectors, and for which we also lack vaccines and specific treatments.

Chikungunya virus (CHIKV) is an alphavirus transmitted by mosquitoes, mostly Aedes aegypti and Aedes albopictus. After half a century of focal outbreaks of acute febrile polyarthralgia in Africa and Asia, the disease unexpectedly spread in the past decade with large outbreaks in Africa and around the Indian Ocean and rare autochthonous transmission in temperate areas.

The multisyllabic chikungunya is the new kid on the arbovirus block, a promising member of a squad of up-and-coming arthropod-transmitted viruses that are gaining ever more attention thanks to climate change and globalization.

A mosquito-borne virus has made the jump from Africa to the Americas, and it combines rapid transmission with searing pain. So swat that skeeter—or you may live to regret it.

The painful, mosquito-borne chikungunya virus has reached the US

First of all, this has nothing to do with chickens. The name comes from the Kimakonde language, which is spoken in Tanzania, where the disease was first identified in 1952. It roughly means "to become contorted," because it can cause arthritis-type pain that makes people hunch over. (Usually, such pain is temporary.) It's pronounced chickun (sort of like the bird) GUN (like the weapon) yuh.

What Is Chikungunya and Why Is India Worried About It?

India has reported a marked increase in the number of people falling victim to a debilitating disease called Chikungunya. The mosquito-borne illness causes a fever, joint pain and sometimes a rash but is rarely fatal.

Chikungunya virus seems, at first, to have a lot in common with dengue virus, another mosquito-borne pathogen. Both cause extremely painful diseases—chikungunya’s name comes from a Makonde word meaning “that which bends up,” referring to the contortions sufferers put themselves through due to intense joint pain. Dengue’s nickname is breakbone fever. Both viruses are primarily transmitted by the Aedes aegypti mosquito, and both have been moving slowly closer to the United States over the past decades, with local cases of dengue fever already found in Florida and Texas.

I'm not being paranoid, especially since Chikungunya is not likely to be fatal. It's just that I'm not into flu-like symptoms or arthritic joint pain. And mosquitoes are my least favorite biting pest, except for maybe the no-see-ums, which I have dubbed "surely-feel-ums" (you heard it here first).

1 Million People Have a Disease You’ve Never Heard Of

Chikungunya virus has infected over one million people this year, but Big Pharma still isn't stepping up.

A New England chick's Chikungunya experience, from early symptoms through the chronic phase

hikungunya (pronunciation: \chik-en-gun-ye) virus is transmitted to people by mosquitoes. The most common symptoms of chikungunya virus infection are fever and joint pain. Other symptoms may include headache, muscle pain, joint swelling, or rash. Outbreaks have occurred in countries in Africa, Asia, Europe, and the Indian and Pacific Oceans. In late 2013, chikungunya virus was found for the first time in the Americas on islands in the Caribbean.

Chikungunya is a mosquito-borne viral disease causing symptoms such as fever, joint pain, muscle pain, headache and nose and gum bleeding. Chikungunya is present in parts of Africa, Southeast Asia and on the Indian subcontinent.

Although Chikungunya virus has been mainly reported in Africa, Asia, Europe, and the islands in the Indian and Pacific oceans, it has spread to the Americas recently.

Chikungunya is a viral disease transmitted by the bite of infected mosquitoes such as Aedes aegypti and Aedes albopictus. It can cause high fever, join and muscle pain, and headache. Chikungunya does not often result in death, but the joint pain may last for months or years and may become a cause of chronic pain and disability. There is no specific treatment for chikungunya infection, nor any vaccine to prevent it. Pending the development of a new vaccine, the only effective means of prevention is to protect individuals against mosquito bites.

Chikungunya is one of a group of arboviruses (of the family Togaviridae) and is transmitted by mosquitoes (usually of the Aedes spp.). They tend to bite during daylight. Its name derives from a verb from the Kimakonde language, meaning "to become contorted", referring to the affected person's stooped posture caused by joint pains. It was first described in southern Tanzania in 1952.

Chikungunya virus (CHIKV) is an arthropod-borne alphavirus that belongs to the family Togaviridae transmitted by Aedes mosquitoes. The virus is known for causing an acute febrile illness, rash, and arthralgia known as Chikungunya fever followed by potentially chronic and debilitating arthritic symptoms that may last for months or years.

Chikungunya is a viral disease transmitted to humans by infected mosquitoes. It causes fever and severe joint pain. Other symptoms include muscle pain, headache, nausea, fatigue and rash. Joint pain is often debilitating and can vary in duration. The disease shares some clinical signs with dengue, and can be misdiagnosed in areas where dengue is common. There is no cure for the disease. Treatment is focused on relieving the symptoms.