Where in health am I? : Home / Health Cloud / Challenges / Infections / Zoonoses / Leptospirosis

And if we know a disease that is synonymous to flood water exposure, it would be leptospirosis - Ditas Aldover-Chu, Henry's Mom Blogs 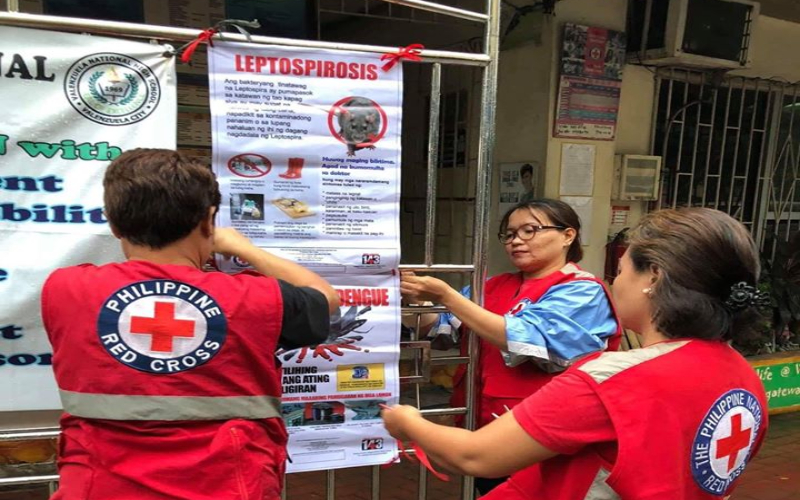 So, what's the story with this disease called leptospirosis, better known simply as "lepto"...

The Centers for Disease Control has removed Leptospirosis from the “reportable human diseases” list, but there is still significant concern over this zoonotic disease. Our pets are susceptible to lepto as well, but many owners are afraid to vaccinate for the illness. What’s the real story and how can we keep our pets and families safe...

Leptospirosis is a zoonotic disease- a disease that can be passed between animals and people. It is spread by spirochete (spiral-shaped) bacteria in the urine of infected rodents, wildlife, and pets. There are more than 200 different strains of lepto…

The clinical diagnosis of leptospirosis is challenging, and it can easily be missed unless there is an epidemic or the patient develops Weil’s disease.

Leptospirosis is one of the most prevalent zoonotic diseases. While there are over 200 serovars around the world, the most common found in the U.S. include grippotyphosa, bratislava, autumnalis, and ponoma.

Explainer: what is leptospirosis and how can it harm us and our pets?

We can prevent leptospirosis by limiting contact we and our pets have to sources of infection, and by vaccinating our dogs. Make sure dogs don’t swim in and drink from stagnant water like ponds, lakes or puddles.

Key Features of Leptospirosis in Humans

Humans become infected through direct contact with the urine of infected animals, or through contact with water or soil that is contaminated with this infected urine. The risk of disease transmission is increased by various environmental factors, including heavy rainfall or flooding, poor sanitation, and population growth.

Leptospirosis is a worldwide zoonotic infection with a much greater incidence in tropical regions and has now been identified as one of the emerging infectious diseases. The epidemiology of leptospirosis has been modified by changes in animal husbandry, climate, and human behavior.

Leptospirosis is a widespread and potentially fatal zoonosis that is endemic in many tropical regions and causes large epidemics after heavy rainfall and flooding. Infection results from direct or indirect exposure to infected reservoir host animals that carry the pathogen in their renal tubules and shed pathogenic leptospires in their urine.

Leptospirosis Reported In New York City: What You Need To Know

The good news is that leptospirosis generally produces minimal to no symptoms in the majority of patients. Those who do become symptomatic develop flu-like complaints which typically begin 7-10 days after exposure, but can be severe in nature and include fever, chills, headache, muscle aches, red eyes and occasionally a skin rash, as well as low back pain in the first phase of the illness.

Leptospirosis is a potentially fatal bacterial disease that can display a wide array of clinical presentations thus mimicking better-known illnesses. Although, leptospirosis is primarily a zoonotic disease, it frequently inflicts severe illness and death on communities around the globe.

Life after leptospirosis, a pilot study

The signs and symptoms associated with acute human leptospirosis are well known. Less is known about how well patients manage after they begin recovering from the illness.

The Economic Burden of Leptospirosis

Recently world health organizations have made tropical diseases a high priority for study. Leptospirosis is a zoonotic disease with considerable global human and animal incidence. Despite this, there has not been a great deal of research into the economic burdens caused by leptospirosis in humans, livestock, and domestic pets, nor has it been declared to be a high priority by many world health organizations.

The Pilgrims Should Have Been Thankful for a Spirochete

What killed so many people so quickly? The symptoms were a yellowing of the skin, pain and cramping, and profuse bleeding, especially from the nose. A recent analysis concludes the culprit was a disease called leptospirosis, caused by leptospira bacteria. Spread by rat urine.

Worldwide, Leptospirosis is the most widespread zoonotic disease. Cases occur routinely in tropical countries, but increases have been seen in Europe and North America as well.

Leptospirosis can be transmitted by a variety of domestic and wild animals, including rats, mice and racoons.

Leptospirosis is a bacterial disease found throughout the world. Its main reservoirs are rodents, particularly rats, which excrete the bacterium in their urine. In humans the disease may lead to kidney failure, and even death in 5 to 20% of cases.

Leptospirosis is a bacterial disease that affects humans and animals. It is caused by bacteria of the genus Leptospira. In humans, it can cause a wide range of symptoms, some of which may be mistaken for other diseases. Some infected persons, however, may have no symptoms at all.

The risk is low for most travellers, but is higher for travellers who: •visit tropical areas where leptospirosis transmission is more common. •participate in fresh water activities such as rafting, canoeing or swimming in streams, rivers, ponds or lakes, particularly following periods of heavy rainfall or flooding. •work outdoors or with animals, such as farmers, veterinarians, military personnel, etc.

The disease is spread by the urine of infected animals (many species, both domesticated and wild); the bacteria can survive in the water and soil for months. The disease is most common in temperate and tropical climates. The infecting bacteria occur worldwide.

In 90% of cases, leptospirosis only causes mild flu-like symptoms, such as a headache, chills and muscle pain. However, in some cases the infection is more severe and can cause life-threatening problems, including organ failure and internal bleeding. In its most severe form, leptospirosis is also known as Weil's disease.

Leptospirosis is caused by infection with Leptospira germs (bacteria). The infection passes from animals (commonly rats, cattle, pigs and dogs) to humans. In most cases, leptospirosis causes a mild illness. But, in some people, a more severe illness occurs. This more severe form is commonly referred to as Weil's disease. The main treatment for leptospirosis is antibiotics and most people make a full recovery.

Leptospirosis is an infectious disorder of animals and humans. It is the most common zoonotic infection in the world. It is easily transmitted from infected animals through their urine, either directly or through infected soil or water.