Where in health am I? : Home / Health Cloud / Challenges / Infections / Zoonoses / Marburg Virus

Ebola and Marburg may have diverged as one spread among free-living fruit bats, the other among cave dwellers - Eric Leroy 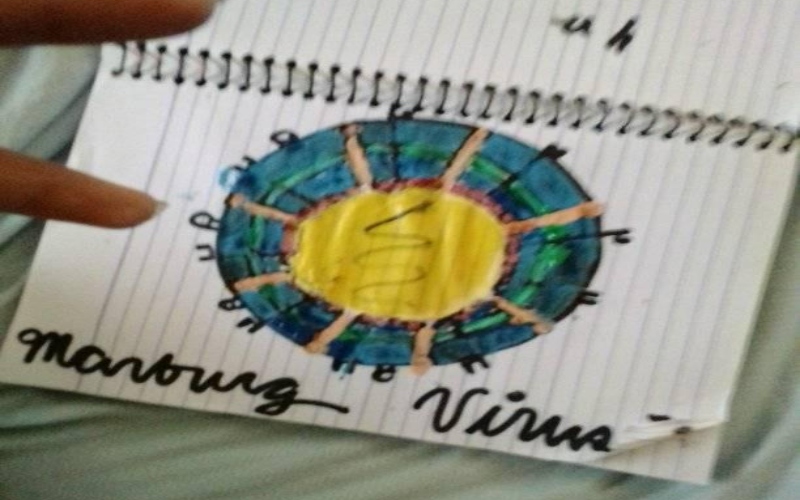 If you have to fall sick with a viral hemorrhagic fever from the Marburg-Ebola family, which one should you choose?

Go with Marburg. Though we don't know very much about how these viruses work, history suggests that between a quarter and half of all people who get Marburg die from it; there is a 90 percent mortality rate among those who contract Ebola.

Symptoms of the two diseases are very similar. Both begin with the sort of muscle pain, fever, headaches, and nausea that you might see in response to any viral infection. About five days later, a rash appears on the chest and back, and the victim's face may appear vacant and expressionless, as the virus begins to affect…

Marburg Virus, Related to Ebola, Is Found in Bats in West Africa

The virus was named for the German city where it was first detected in 1967, nine years before the discovery of Ebola. A mysterious disease that included hemorrhagic fevers struck workers at a vaccine factory who had handled a shipment of green monkeys from Uganda. The virus also infected people in Frankfurt and Belgrade; 31 people fell ill, and seven died.

A Primer on Marburg Virus

Marburg is a rare, severe form of hemorrhagic fever closely related to the Ebola virus. In both diseases, victims bleed to death, often from every orifice and every organ. Few infections are as deadly.

The animals were spared from Marburg virus even when treated three days after infection.

Marburg and its close relative Ebola cause sporadic outbreaks of disease in people in Africa, but the animal that harbours these viruses for the rest of the time has proved elusive. Hundreds of wild animals were tested before Eric Leroy and colleagues at the International Centre for Medical Research in Franceville, Gabon, found traces of Ebola in three species of fruit bat in 2005.

Ebola and Marburg may have diverged as one spread among free-living fruit bats, the other among cave dwellers.

Natural reservoir for emerging viruses may be bats.

Marburg cases in Uganda: the lowdown about Ebola’s ‘sister’ virus

The Marburg virus is probably most easily introduced as the sister of the infamous Ebola virus. The viruses are similar in their genetic and structural makeup, they’re transmitted from human-to-human and their clinical presentation in humans is similar. But there are some marked differences.

A cousin of Ebola, the Marburg virus has erupted periodically in Africa in sudden, gruesome epidemics, only to disappear just as mysteriously.

Marburg virus disease (MVD) (formerly known as Marburg haemorrhagic fever) was first identified in 1967 during epidemics in Marburg and Frankfurt in Germany and Belgrade in the former Yugoslavia from importation of infected monkeys from Uganda. MVD is a severe and highly fatal disease caused by a virus from the same family as the one that causes Ebola virus disease.