Where in health am I? : Home / Health Cloud / Challenges / Infections / Zoonoses / Tularemia

Tularemia is a classic zoonosis, capable of being transmitted by aerosol droplets, direct contact, ingestion, or through bites of arthropods — primarily ticks - Dr. Ron Clarke 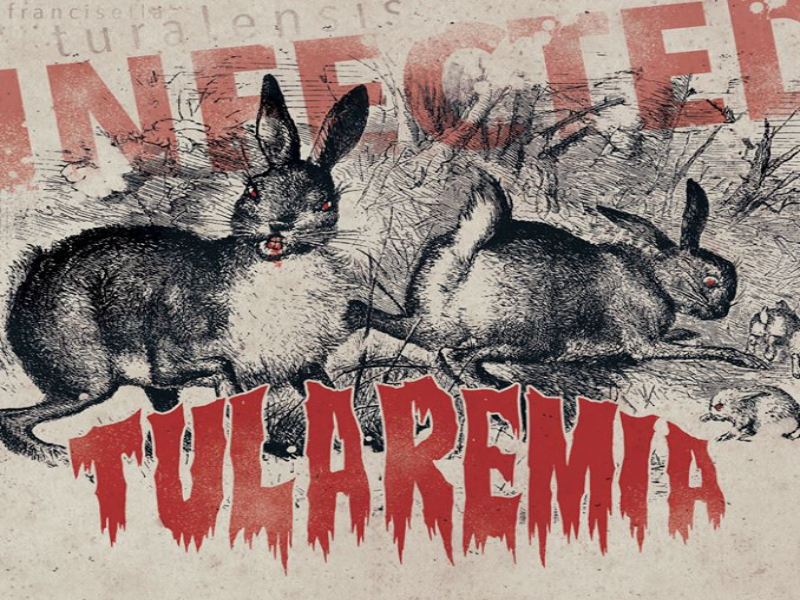 Tularemia on the Tube

The Cold War race to use diseases as weapons is driving much of the action this season on FX’s The Americans, the critically acclaimed television drama in which two Soviet intelligence agents pose as a married couple to spy on the American government. The protagonists pick up a most important package from another Russian secret agent working at the CDC: a jar containing a dead rat infected with tularemia. The Soviets are anxious to get the rodent back to the motherland to add to their arsenal.

Tularemia’s relative obscurity left this ardent viewer with a lot of questions about possible plot holes and the history of the disease. As luck would have it, one of the world’s foremost tularemia…

A Rare Outbreak of 'Rabbit Fever' Popped Up at a German Winery. The Surprising Cause? Grapes.

When grape harvesters at a German winery mysteriously fell ill with "rabbit fever," a rare bacterial illness, one question in particular stood out: How did they get sick? After a lengthy investigation, officials had an answer: It was the grapes.

Explainer: what is tularemia and can I catch it from a possum?

Fortunately, human cases of tularemia are relatively rare and appear to be limited to the Northern Hemisphere. Yet, even in the US, where the disease is well described, human cases rarely exceed 100-200 a year.

Tularemia bacterium hibernates and can be traced in terror attacks

The bacterium that causes tularemia in animals and humans can survive in a dormant state in nature for a long time before causing new outbreaks. This according to a new doctoral thesis at Umeå University. The thesis also shows a method for tracing if the bacterium is used as a biological weapon in, for example, terrorist attacks.

Tularemia, sometimes called rabbit fever, is an uncommon but debilitating disease spread from animals to man caused by the bacteria Francicella tularensis. It can be found in a variety of animal hosts, notably lagomorphs (rabbits and hares), aquatic rodents (muskrats, beavers, and water voles), other rodents (water and wood rats and mice), squirrels, and cats. In the United States, an outbreak involving commercially distributed prairie dogs occurred in 2002.

Last year, while working on a vaccine to protect against bioterrorist attacks, three laboratory workers at Boston University were exposed to the bacteria that cause a rare disease called tularemia, or rabbit fever.

The falsehoods of being safe because we have great Western medicine have crashed down on me because the CDC doesn’t even recognize chronic Lyme disease to exist, or that other diseases can be passed via tick bite (known as co-infections), like tularemia.

Tularemia was named for Tulare County, Calif., where it was first described in 1911. Although initially seen in squirrels, it has been known to infect over a hundred species of mammals, especially rabbits, as well as birds and reptiles. It has been found in all states except Hawaii.

Francisella tularensis is the etiological agent of tularemia, a serious and occasionally fatal disease of humans and animals. In humans, ulceroglandular tularemia is the most common form of the disease and is usually a consequence of a bite from an arthropod vector which has previously fed on an infected animal.

Tularemia, aka "rabbit fever," is endemic in the northeastern United States, and is considered to be a significant risk to biosecurity -- much like anthrax or smallpox -- because it has already been weaponized in various regions of the world. Biologists are working to uncover the secrets of the bacterium Francisella tularensis, which causes tularemia.

Scientists are gaining an insider's look behind the notorious infectivity of Francisella tularensis. Also called rabbit fever, the disease doesn't seem to spread from person to person. Instead, people contract it from contact with infected animals, from the bite of ticks or deerfly, or from contaminated water or soil. Untreated, tularemia can be lethal; however, it generally responds to antibiotics.

Tularemia on the Tube

One of the world’s foremost researchers studying the obscure but highly infectious, potentially fatal disease discusses how it figures into the plot of “The Americans”

Tularemia is not known to be spread from person to person. People who have tularemia do not need to be isolated. People who have been exposed to the tularemia bacteria should be treated as soon as possible. The disease can be fatal if it is not treated with the right antibiotics.

In both glandular and ulceroglandular tularemia, organisms enter the skin through the bite of infective arthropods, direct contact with infectious materials (such as contaminated carcasses), or percutaneous inoculation with a sharp object (such as a bone fragment from a contaminated carcass).

F. tularensis can be freeze-dried and made into a powder which can be aerosolized. This makes it a potential source of bioterrorism similar to anthrax, botulism, or brucellosis because it could be delivered to large numbers of people.

Approximately 200 cases of tularemia in humans are reported annually in the United States, mostly in persons living in the south-central and western states. Tularemia is an occupational risk for farmers, foresters, and veterinarians, and is listed by the US Centers for Disease Control and Prevention (CDC) as one of the six category A, or high-priority, biological warfare agents.

Scientists show how tularemia bacteria trick cells to cause disease

Previously, researchers discovered that F. tularensis could inhibit inflammation following infection of immune system cells called macrophages, but they did not understand how it occurred.